“Climate emergency” is the 2019 word of the year, according to the Oxford English dictionary —  and rightfully so.

Over the last year, rising emissions and record-breaking events — from hurricanes in the Atlantic to wildfires in Australia — have been met with rising outrage from millions of young people and activists.

But how did leaders respond to the growing weight of evidence and demands for change? And are we on track to keep the world from reaching dangerous climate tipping points?

I spoke with the UN Foundation’s Vice President for Climate, Energy and Environment, Pete Ogden to unpack the game-changing moments for global climate action in 2019, as well as what we can expect in 2020.

Chandler Green: I don’t think anyone quite expected how big the youth climate movement would be at the outset of 2019. How did youth climate activists bring the issue of climate change to the forefront this year?

Pete Ogden: They did it through their tenacity, their numbers, and their moral authority.

First, on their numbers. They went from a small cadre in Europe — led by climate activist (and recently-announced Time Person of the Year) Greta Thunberg — to a global phenomenon with millions going on climate strike.

Second, there’s the tenacity behind their movement. Unlike a one-off march, they’ve been striking from school every Friday and showing up in cities all across the world, as well as driving awareness and shaping the dialogue through their large and active social media presence . That kind of tenacity has made people view this issue differently. 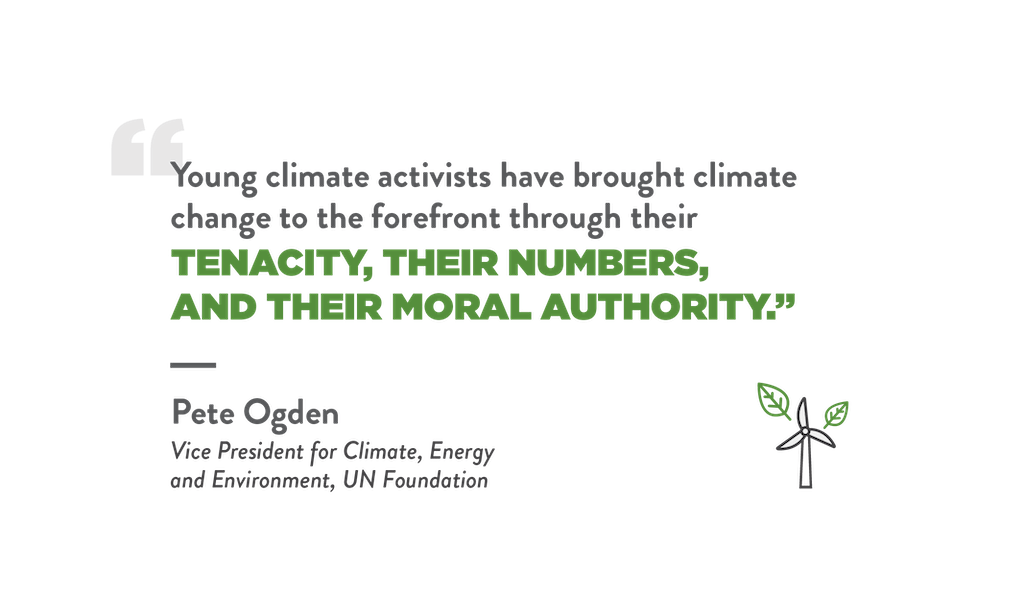 The third factor is their moral authority. They are the generation that is going to be hit extremely hard by climate change in ways that we’re just beginning to see. If you look internationally, many of the earliest and most powerful voices to bring climate change to the global forefront were from the small islands in the Pacific who are among the most vulnerable—and existentially threatened—by climate change. And they bore virtually no responsibility for creating this problem in the first place. Young people have tapped into a similar vein.

In March, the UN Secretary-General wrote an op-ed in which he welcomed the youth movement and defined his own UN Climate Action Summit as an effort to join them in pushing for leaders to heed their call. He brought  youth voices into his Summit in September to speak directly to countries from around the world, and he organized and hosted the first-ever UN Youth Climate Summit inside the UN as well.

CG: Speaking of, the UN Secretary-General’s Climate Action Summit was a pivotal moment for climate action in 2019. What were the major outcomes?

PO: The top priority of the Climate Action Summit was to increase ambition in line with a future that would limit warming at no more than 1.5°C , which is a huge task.

For countries, he was focused on getting them to increase their own national targets under the Paris Climate Agreement. The agreement defines 2020 as the year to revisit your goals for the first time since 2015 and to determine whether or not they should be raised. I think it’s fair to say that for every country in the world, there is more that can and needs to be done. This year’s Climate Action Summit fired the starter’s pistol to get the world moving, as we saw more than 70 countries commit to raising their ambition. The summit was always intended to be a springboard, and now we need other countries and sectors to follow and increase their ambition.

While many commitments and partnerships emerged, I think one of the important ones is the move to carbon neutrality. That means you’re not putting any more carbon into the atmosphere than you are taking out, by sequestering it in land, trees, or other technological solutions. Carbon neutrality needs to be the goal by mid-century — that’s what gets you on that path to 1.5°C . By framing it that way, rather than the next round of targets in 2030, it causes countries to start thinking about the ultimate goal against which their near-term actions should be measured.

CG: One of the biggest contributors to creating that long-term vision is the Intergovernmental Panel on Climate Change (IPCC). This past year, they released two  major special reports on climate change. Why were those two reports significant?

PO: The IPCC has just completed its biggest and most ambitious phase in its history. It began with the launch of the 1.5°C Report on Climate Change last fall, which was a watershed moment in terms of public understanding of  what exceeding 1.5°C would mean for us, and the kind of actions it would require to stay under that target.

The two special reports this year focused on climate change and lands, as well as on ocean and ice, bring climate out of an abstract world of temperature goals and into the physical world in which it will manifest for us.

CG: While we’ve seen some countries move forward on the science, the U.S. is taking a big step backwards. On November 4, the Trump administration sent the formal notice to withdraw from the Paris Agreement, which will go into effect a year from then. How are U.S. states and other local leaders stepping up in the meantime?

PO: In this vacuum, we’ve seen a number of new climate champions step up at the state and local levels. The U.S. Climate Alliance, a bipartisan group of states committed to reaching the goals of the Paris Climate Agreement, is a great example of this new leadership. The alliance started out as three governors in June 2017 and has grown to 25 governors, constituting well over half of the U.S. economy. These states are showing that acting on the climate crisis is both a possible and desirable place to be.

And according to its latest report, alliance states are within reach of the Paris Agreement goal.

CG: With the presidential election coming up in 2020, we could see a major shift in climate action nationally. How could this impact action at the global level?

PO: Politics aside, the U.S. election is a big moment for this issue nationally and globally.

And we’re already starting to see that shift through polling. Climate change has become one of the top issues for democratic voters, a recent poll found that seven in 10 registered voters support government action on climate change. Democratic candidates have made climate change a central part of their campaign, and had the chance to discuss their ideas in the first prime-time climate debate.

In terms of what could happen after November 3: While the Trump administration appears unlikely to change its mind on leaving the Paris Agreement, a new president could get back in right away — as every Democratic candidate has pledged to do. With the U.S. back in the agreement, and by re-establishing our credibility with strong domestic climate action at the federal level, we could once again be a global leader on the issue — as we should.

CG: Outside of the U.S. election, what are some major opportunities for global climate action to look out for in 2020?

PO:  For countries, it will largely revolve around the Paris Agreement calendar, but not entirely. Next year, the Conference of Parties (COP) will be in Glasgow, UK, and it will be a critical moment for countries to increase ambition in line with the science. While 70 countries have updated — or intend to update — their national plans, they account for less than 10% of the world’s emissions. Just 20 countries are responsible for more than  80% of global emissions, so we need these leaders to come forward with ambitious plans next year. The EU-China Summit in September will be one of the focal points for country-to-country diplomatic engagement as well.

For other actors, there will be different moments.

For communities focused on the intersections between climate and biodiversity, there will be a major negotiation at the end of the year — the Convention on Biological Diversity (CBD) — where a whole set of international targets for biodiversity are going to be set for 2030. As the IPBES report warned, 1 million species are threatened by extinction by human activities, including climate change. Many solutions put forward for nature will also be beneficial for climate action.

For the investor community, the UN Foundation is excited to be co-hosting the Investor Summit on Climate Risk with Ceres. This summit in March is going to focus on what it means for the investor community to align with the Paris Agreement and to look toward investing in a carbon-neutral world. This is vital for the long-term planning of clean and sustainable economies. And many investors are moving in the right direction: At the UN Climate Action Summit, a group of the largest asset-owners – with more than $2 trillion under management — announced they will move to carbon-neutral portfolios by 2050.

Additionally, we can expect continuing pressure from consumers, shareholders, and employees on businesses to reduce their carbon footprint. For example, 177 companies pledged to set emissions reduction targets in line with the 1.5°C  target this past year.

And of course, there’s the youth movement, which continues to put palpable pressure on leaders across all sectors. They had a big presence at COP25 in Madrid, where some 500,000 protested in the streets there, and Greta Thunberg delivered another memorable speech on the urgency of this crisis. With so much still at stake, I don’t foresee this movement dissipating anytime soon.

6 Reasons Why the Paris Agreement is Good for Economies