By Justin Kenney and Monica Dean on September 25, 2019

The world’s leading group of climate scientists, the United Nations’ Intergovernmental Panel on Climate Change (IPCC), released a new report finding that unique and vital environments on Earth are being threatened by climate change — from the highest mountains to the deepest depths of the ocean and to both the north and south poles.

The IPCC Special Report on the Ocean and Cryosphere in a Changing Climate, authored by 104 experts from 36 countries, explores the relationship between climate change and the ocean, as well as coastal, polar, and mountain ecosystems, and the people that depend on them. The report lands just a month after the IPCC Special Report on Climate Change and Land, which revealed that we must manage land more sustainably to meet our climate goal of 1.5°C. It also arrives less than a year after the IPCC’s alarm-raising 1.5°C report, which found that the world must take urgent, transformative actions to limit warming to 1.5°C degrees and avert the worst impacts of climate change.

Although the ocean and ice environments explored in this special report may seem far away, make no mistake: the latest science reveals that changes in these ecosystems impact people today and for generations to come.

Here are four highlights you should know:

1. What is a “Cryosphere” and Why Does it Matter?

1. What is the “Cryosphere” and Why Does it Matter?

Before diving into the findings, it’s crucial to understand what the “cryosphere” is and why it’s essential to the climate system. The cryosphere is all of the Earth’s frozen water: ice caps, glaciers, permafrost, shelf ice, and snow found on every continent, but especially at the poles.

As massive, frozen white regions, the Arctic and Antarctica, serve an important role in regulating the planet’s temperature by reflecting sunlight back into space. Consequently, melting in these frozen regions accelerates warming further, causing even more ice melt — and that’s exactly what we’re seeing. 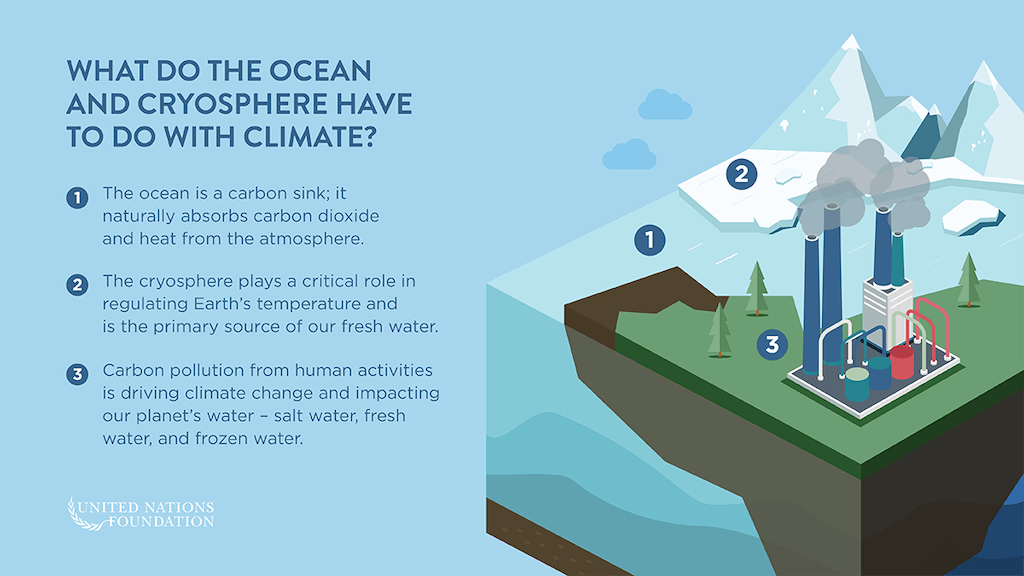 See more graphics based on the IPCC Special Report on Ocean and Cryosphere here.

Glaciers and ice sheets in both polar regions are losing ice at an increasing rate. In fact, temperature rise in the Arctic has been more than double the global average over the last two decades. These changes impact people and ecosystems in these regions and far beyond. The Arctic, for example, is home to over 4 million people and many delicate ecosystems that rely on ice, all of which are at risk from warming temperatures. And beyond that, melting ice has grave implications for sea level rise: A collapse of the west Antarctic ice sheet could dramatically increase the amount and speed of sea level rise across the globe.

Another alarming feedback is happening with permafrost, soil or rock that has been frozen for many years and stores large amounts of heat-trapping gases like methane and carbon dioxide. As warming reaches unprecedented levels, permafrost is starting to thaw and release those previously trapped gases, accelerating climate change. It is estimated that the Arctic and Boreal regions contain almost twice as much carbon stored than the entire atmosphere.

2. The Ocean is “Taking the Heat” from Climate Change

Although the ocean has often been excluded from key conversations on the climate crisis, the special report spotlights how it’s been “taking the heat” all along. The ocean has been absorbing 90% of the heat over the last 50 years and 20-30% of human-caused greenhouse gas emissions since the 1980s, helping to buffer the amount of warming experienced on land — but not without consequence.

As a result, the ocean is becoming warmer and more acidic, and it’s losing oxygen, making it less habitable for marine life — from the coasts to the bottom of the sea floor.

These are just a few major impacts, but it’s clear that many marine species face an uncertain future.

3. Lives and Livelihoods are at Stake

The report warns that impacts to ocean and ice are not limited to ecosystems; they are threatening people’s lives and their ways of life:

For people living on the coast and low-lying islands, sea level rise and storm events will increase. Around 1.9 billion people and over half of the world’s megacities reside on the coast, meaning that more frequent extreme events like hurricanes will inflict more destruction. Some small islands may become uninhabitable.

For people living in or near high mountain regions, water security is a major concern. Mountains with glaciers or snow store massive amounts of freshwater for communities, and with warming from climate change, these places — like in the Western Himalaya and in the Cascades — are losing water for farming.

And for people reliant on the ocean for food, climate change adds more pressure. Climate change is expected to impact the revenues of 89% of the worlds fishing countries by 2050.

The consequences of climate change are most severe for the ocean and cryosphere — and ultimately ourselves — if we do not rapidly reduce greenhouse gas emissions. The decisions we make now will have ripple effects for generations to come.

With rapid emissions reductions that limit warming to 1.5°C, the impacts on people and ecosystems will be less challenging to manage. We can preserve more of our glaciers and high mountain landscapes, stabilize water supplies in mountain regions and further downstream, save more ocean ecosystems, and more.

Unfortunately, some changes are already locked in. Both the ocean and cryosphere respond slowly, so some warming and melting is inevitable. But we can also blunt the effects of change by restoring and conserving critical ecosystems, as well as helping communities prepare and adapt to climate change.

Altogether, the special report contains a range of complex, far-reaching impacts across our ocean and our ice, but we can prevent the worst of them if we act now.