Together, we built support for the UN, improved global health, advanced energy and climate solutions, and helped promote girls’ and women’s rights – giving more people the chance to lead healthy, productive lives and moving the world closer to a sustainable future. Here are 14 highlights of the work you made possible in 2014. 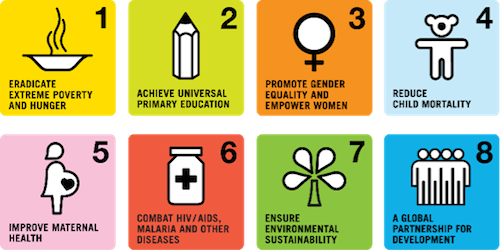 The UN Foundation and partners continued to push for progress on the Millennium Development Goals, helping rally the community through “MDG 500,” a digital day of dialogue on August 18 to mark 500 days until the target date for the MDGs. Through our campaigns and initiatives, we also supported the UN and partners in their work to meet the goals.

Additionally, we supported the UN in the process to create the next set of goals for 2016-2030. This included encouraging Americans and people around the world to share their priorities for our future through the UN’s MY World survey, which reached more than 7 million votes this year. 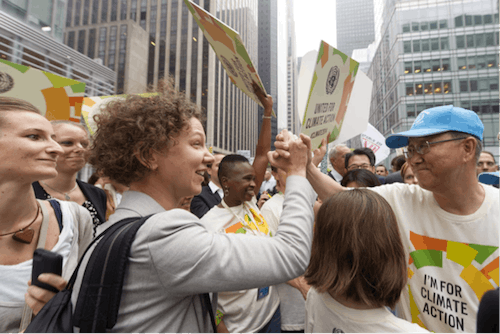 This year, we helped spread the word on the UN Intergovernmental Panel on Climate Change’s comprehensive work on climate science, including raising awareness of the reports it released throughout the year among citizens and journalists. We also supported the UN Secretary-General’s successful Climate Summit in September through press fellowships for 24 U.S.-based and international journalists and by creating a digital media space for journalists and bloggers.

3. Connecting Youth to the UN 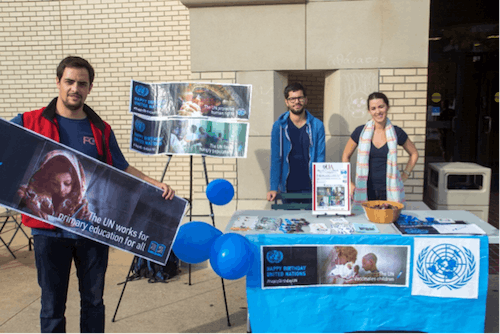 The United Nations Association of the USA launched the GenUN online hub to connect young people with the UN to help solve some of the world’s most important challenges. Since its launch in August, nearly 2,000 students have signed up and taken hundreds of actions to support the work of the UN. 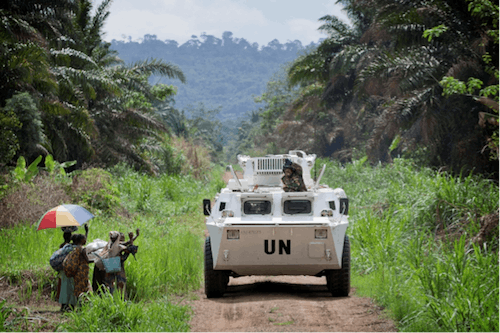 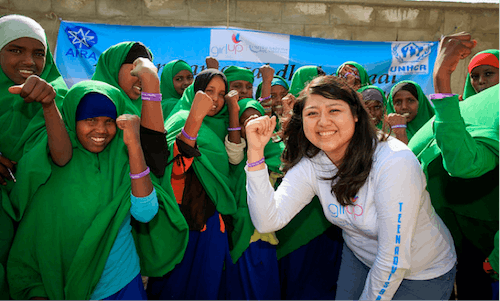 The UN Foundation works with the UN and partners to empower girls and women around the world. In celebration of International Day of the Girl on October 11, our Girl Up campaign launched #GIRLHERO, a photo-sharing campaign that mobilized people to take part in a growing movement to highlight the rights and power of girls. More than 12,500 actions were taken by people in nearly 80 countries.

The Data2X initiative, which is powered by the UN Foundation, announced new partnerships to close gender data gaps – which is essential to having an accurate picture of women’s lives so we can develop policies and programs that effectively address their needs.

The Universal Access Project continued its advocacy work, hosting multiple high-level events and placing more than eight op-eds in key Congressional districts. We also co-hosted an event with the State Department and the UN Population Fund for the 20th anniversary of the International Conference on Population and Development. 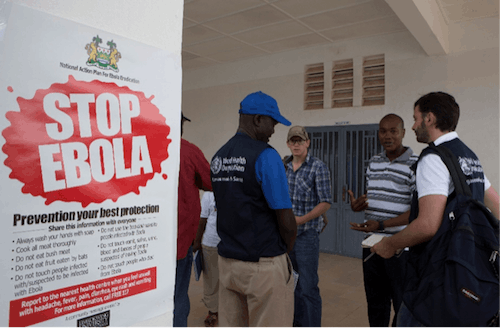 The UN Foundation has mobilized to support the UN’s response to the unprecedented Ebola outbreak, including launching a dedicated Ebola blog to provide informational updates and an Ebola Response Fund. Donations to the fund go directly to the UN so it has resources to provide technical advice and to obtain supplies such as personal protective equipment, chlorine, emergency vehicles, and motorcycles for contact tracing, among other needs. 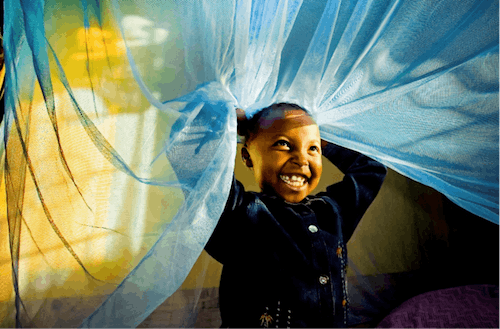 Protecting children from preventable diseases is a key part of the UN Foundation’s work. The Nothing But Nets campaign worked with its UN partners to help deliver more than 1 million anti-malaria bednets to protect refugees and families living in emergency settings in South Sudan, Sierra Leone, Chad, Central African Republic, and Liberia.

Our Shot@Life campaign partnered with Walgreens to “Get a Shot. Give a Shot.” From July 13 to October 13, for every immunization administered at a participating Walgreens location, one life-saving vaccine was donated to Shot@Life, helping give millions of children a shot at healthy lives. The UN Foundation also supported the work of the Measles & Rubella Initiative and the Global Polio Eradication Initiative to safeguard children from measles, rubella, and polio.

8. Improving the Health of Mothers 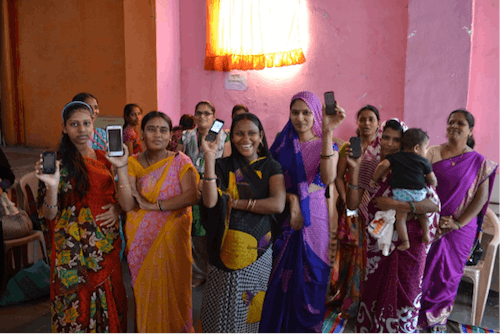 In November, the Mobile Alliance for Maternal Action (MAMA), which is housed at the UN Foundation, launched with partners a program in India to provide new and expecting mothers living in Mumbai slums with age and stage-based health information that empowers them to make the best decisions for themselves and their families.

Additionally, the Global Moms Challenge held a “Global Moms Relay” to share stories of motherhood and to connect moms from around the world. The relay, which included participants from all 50 U.S. states and 55 countries, inspired more than 276,000 social media actions and more than 25,000 photo donations. This translated into $300,000 from Johnson & Johnson to help women and children through Girl Up, Shot@Life, and MAMA. 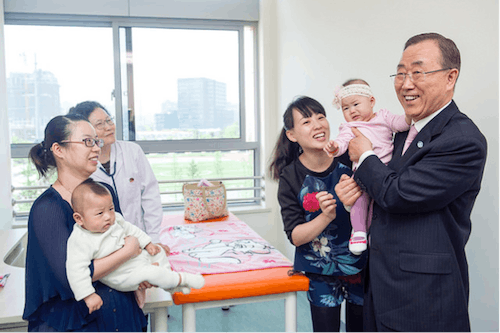 This year, the UN’s Every Woman Every Child movement announced the creation of the Global Financing Facility, a new instrument to build long-term domestic and international funding support for efforts to improve the health of children and women. 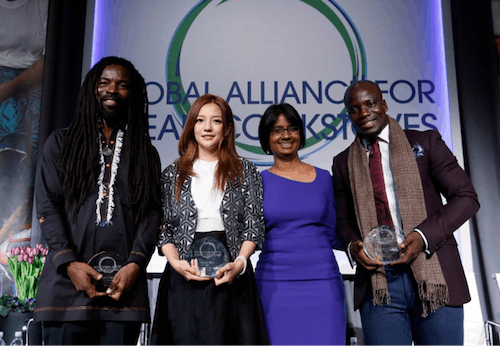 The Global Alliance for Clean Cookstoves, an initiative led by the UN Foundation, announced that is has helped facilitate the adoption of 20 million cleaner and more efficient cookstoves since its launch in 2010. In November, clean cooking advocates pledged more than $400 million to scale up clean cooking solutions around the world. 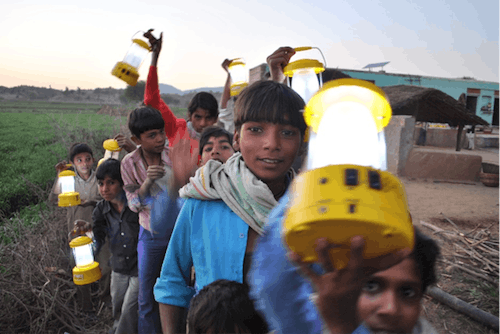 As part of the UN Secretary-General’s Sustainable Energy for All initiative, the UN Foundation works to expand access to sustainable energy through the Energy Access Practitioner Network, which brings together small, medium, and large-scale clean energy enterprises and includes more than 1,900 members operating in 170 countries. Over the past year, practitioners collectively provided sustainable energy solutions to more than 21 million people worldwide.

The UN Foundation also continued its work with the World Health Organization and UN Women on a new partnership on energy for women’s and children’s health under the Sustainable Energy for All initiative. The partnership aims to assess energy needs in health clinics in select countries, propose solutions, and help strengthen the links between the energy and health sectors.

Additionally, we continued to co-lead the Building Efficiency Accelerator initiative to bring together partners to share knowledge and drive action around making buildings more energy efficient. 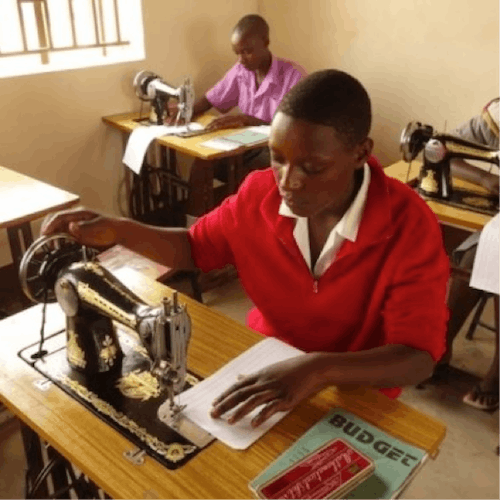 This year, the UN Foundation’s Global Entrepreneurs Council (GEC), in coordination with the UN, brought together UN leaders and over 100 top entrepreneurs at an event to help find innovative solutions to pressing challenges. The event also spurred the launch of the Global Accelerator site, which showcases stories from entrepreneurs and innovators working to build a better world.

13. Recognizing Global Leadership in Support of the UN 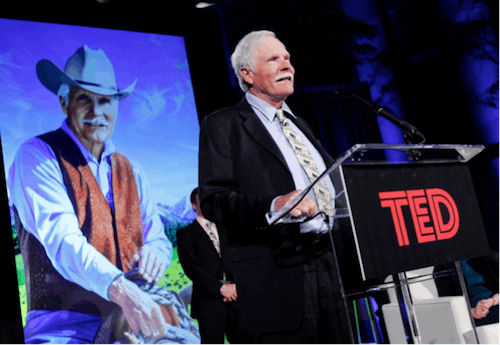 This year, UN Foundation Founder and Chairman Ted Turner was recognized with The Tech Awards’ James C. Morgan Global Humanitarian Award. The National Portrait Gallery also unveiled a portrait of Turner to recognize his ongoing contribution to American public life and his philanthropic work, including his bold $1 billion gift to support UN causes.

In October, at the 2014 Global Leadership Dinner, the UN Foundation and UNA-USA also honored standout leaders from government, business, and UN agencies who are advancing the work of the UN. 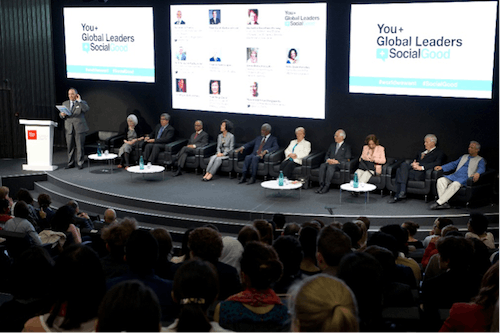 Throughout the year, the UN Foundation – through the +SocialGood community – helped spur dialogue on how technology, innovation, and social good can help tackle some of the world’s most pressing problems. In 2014, +SocialGood members and partners hosted more than 85 events in over 20 countries, across six continents. This includes the annual Social Good Summit, which coincides with the UN General Assembly to open the conversation at the UN to people around the world.

On March 20, the International Day of Happiness, the UN Foundation teamed up with Grammy Award-winning musician Pharrell Williams to encourage people to take action to support the UN and to create a happier world for people everywhere.

The UN Foundation helped spark a global giving movement through #GivingTuesday on December 2, 2014. Citizens and organizations in nearly 70 countries participated – including more than 20,000 partners in the U.S. – in this annual day dedicated to giving. Research shows the amount raised by nonprofits around #GivingTuesday increased by 63% over 2013.