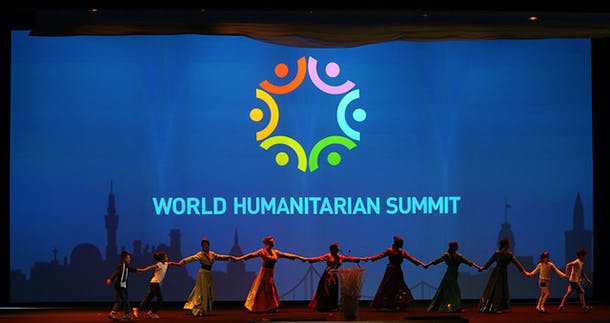 “We are one humanity, with a shared responsibility. Let us resolve here and now not only to keep people alive, but to give people a chance at life in dignity.”

United Nations Secretary-General Ban Ki-moon spoke those words to open the first-ever World Humanitarian Summit, which took place May 23-24 and included 9,000 participants from across the world and across sectors. They represented over 170 countries and came from UN agencies, aid organizations, governments, businesses, faith groups, the media, and affected communities.

With more than 125 million people in need of aid, the Secretary-General recognized the necessity of bringing the world together to renew our commitment to humanity and to work better and smarter to prevent, reduce, and meet humanitarian needs.

The World Humanitarian Summit was created to be more than a conference of financial pledges; rather, it was meant to be a meeting of actions to change the way the international community operates so we better deliver for people suffering from horrific forces beyond their control. Collectively, governments, humanitarian organizations, UN agencies, companies, multilateral banks, and other partners made some 1,500 commitments. Read the Chair’s Summary for more information.

As the UN noted, this summit is not the end point of our work, but a turning point. Tough issues were raised, important issues were elevated, and new partnerships and initiatives were launched. Now we must continue what was started at the summit – in upcoming international gatherings at the UN and in our day to day work – and move from commitments to change.

Here are 10 key takeaways from the World Humanitarian Summit to build on in the coming months and years.

People at the center

It’s easy to get overwhelmed by the numbers and complexities of our challenges, but starting with the Secretary-General’s remarks, the discussions and events at the summit focused on putting the people we aim to help at the center of our work. That means making sure in everything that we do that their voices are heard, their needs are met, and they are empowered. As the summit’s Chair Summary notes, “People affected by crisis should be treated as partners, not beneficiaries.”

Education – and hope – for children in crisis

Today, one in four children live in a country grappling with humanitarian crises. UNICEF and global and national organizations launched “ Education Cannot Wait,” a new fund to help millions of children forced out of school because of emergencies and protracted crises have the opportunity to get an education. The fund has already received support from governments and companies.

A Grand Bargain to improve how we do business

Leave no one behind

Last year, world leaders adopted the Sustainable Development Goals and pledged to “leave no one behind.” The summit included a number of discussions and initiatives on how the global community can reach especially vulnerable populations. This included the launch of a Charter on Inclusion of Persons with Disabilities in Humanitarian Action and increased support for girls and women, including strengthening their health and protection against gender-based violence.

UN Deputy Secretary-General Jan Eliasson aptly summed up the spirit of the summit, saying: “No one can solve problems in isolation. I think the most important word in today’s world is ‘together.’” The summit importantly included a range of voices not always seen at big international meetings, including people from affected communities and members of the private sector.

A person in need doesn’t care if help comes from a development program or a humanitarian program. Silos between the two sectors mean that sometimes people who need help fall through the cracks. As the Chair’s Summary noted, “Global leaders recognized that humanitarian emergencies can no longer be viewed in isolation from broader sustainable development efforts, while also ensuring that humanitarian action remains principled where context.” The Secretary-General and eight UN agencies signed a commitment to work in new ways across their humanitarian and development efforts in order to meet and reduce human suffering.

The private sector as a meaningful partner

Hundreds of representatives from the private sector attended the World Humanitarian Summit and their message was clear: They want to be partners in problem-solving, leveraging not only their resources, but their skills, technologies, and expertise to respond to emergencies and crises. A number of companies including Ericsson, MasterCard, and the UPS Foundation announced new commitments and initiatives. And the UN and businesses launched the “Connecting Business” initiative to provide a platform for businesses to help respond to emergencies.

Innovate today for a better tomorrow

The need to work better and smarter was a common thread throughout the two days of discussions. A number of innovations were announced to leverage new technologies, new partnerships, and new ways of working. This includes new financing mechanisms such a humanitarian impact bond and Islamic social finance, as well as the launch of a Global Alliance for Humanitarian Innovation and a Global Humanitarian Data Center.

There was a clear emphasis throughout the summit that we need to do more than just meet needs as they arise; we also need to prevent them from happening in the first place by focusing on the prevention of and resilience against conflict and disasters. This requires a number of steps including strong climate action, data collection and analysis for early warnings, mitigating risks, peacebuilding, conflict prevention, and strengthening resilience in communities. A coalition of nations at risk from the effects of climate change and disasters launched a Global Partnership for Preparedness alongside UN agencies and other partners, among other announcements.

There were many more initiatives announced on topics from improving health in crises to addressing the needs of the growing urban refugee population, and we encourage you to visit worldhumanitariansummit.org to learn more.

This was an important moment to show global solidarity, and now we must continue the momentum to deliver for the millions of people who deserve better from us.