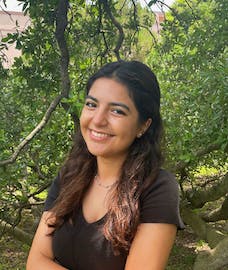 Valeria Colunga (she/her) is a 20-year-old activist, social entrepreneur and community organizer from Monterrey, Mexico. She is a third year student at The University of Texas at Austin working towards a dual degree in Latin American Studies and International Relations &amp; Global Studies. Valeria co-founded Cabilde, a software as a service tool to facilitate civic engagement and advocate for open government in Mexico. As a young teenager, she advocated for gender equality and girls’ empowerment through Girl Up. During her presidency in Girl Up Monterrey, Valeria directed the first Girl Up coalition in Mexico and served as a Teen Advisor. She is a LLILAS Benson Community Engagement awardee and finalist in DivInc's 2021 Champions of Change Awards. In 2020, she began her Spanish podcast Activismos &amp; Quietismos where she talks with other Gen Z leaders and community organizers about social change in Mexico. In 2021, she was appointed by the United Nations Foundation as one of the eight Next Generation Fellows to write Our Future Agenda, a report aimed to foster solidarity between young people and the international community.