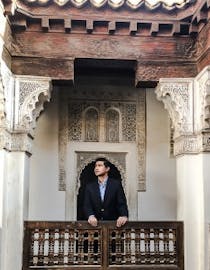 Michael McColpin is an Associate Producer with the Digital Media team at the United Nations Foundation. As Associate Producer, Michael creates, edits, and posts digital content to www.unfoundation.org and the Foundation’s primary social media outlets. He graduated from the University of Illinois-Springfield with a dual degree in Political Science and Global Studies. In 2011, Michael traveled throughout Central America examining the engineering and social hurdles in achieving the Millennium Development Goals in the region. While in college, Michael interned at the Legal Services of Eastern Missouri, the Office of U.S. Senator Dick Durbin, and the U.S. Permanent Mission to the UN. Additionally, Michael served as a production assistant for the Center for State Policy and Leadership where he directed and produced a weekly show on politics. After graduating college, he entered state politics as a Research and Appropriations Analyst at the Illinois House of Representatives; where he was responsible for legislation relating to Revenue and Finance, State Government Administration, and Consumer Protection. At the state capitol, Michael also helped analyze the state’s $65.9 billion budget during the midst of a budget crisis. While in Illinois, Michael worked on a number of political campaigns for the Democratic Party of Illinois. Most recently, he coordinated campaign events and get out the vote efforts for Hillary Clinton in downstate Illinois for the 2016 Democratic Primary. Michael is a native of St. Louis, Missouri.​

Q&A: How Digital Tech is Transforming the Fight Against Global Hunger

Uniting to Fight Malaria and Protect the Environment

Health Workers: The First Line of Defense Against Malaria in Uganda

Three Issues to Watch at WHO’s Executive Board Meeting

Stories from the Front Lines of COVID-19 in the United States: Sara