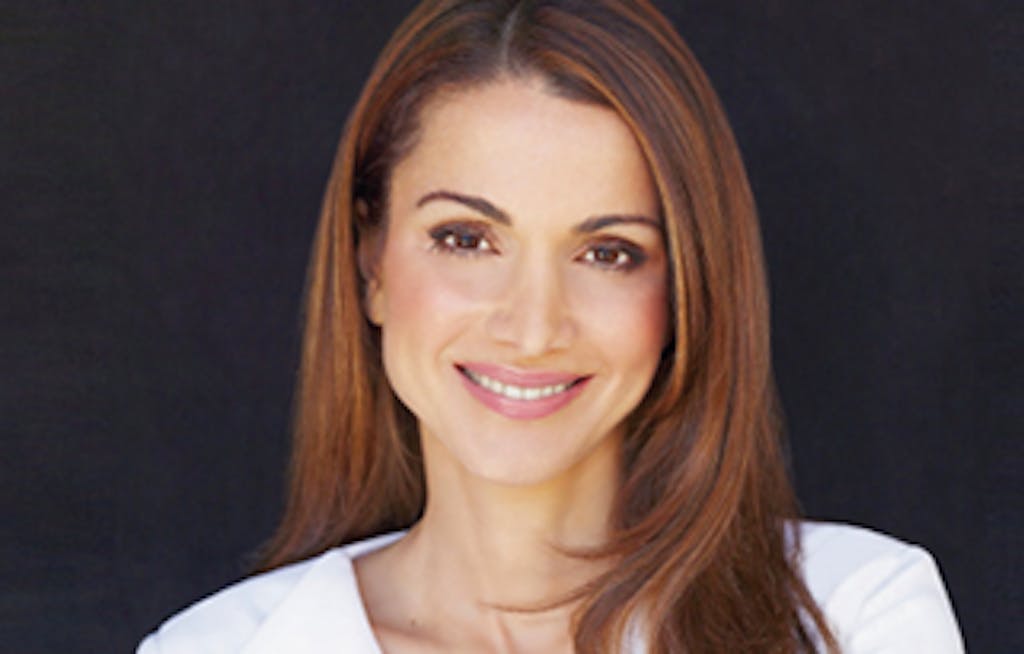 Her Majesty Queen Rania Al Abdullah was born Rania Al Yassin on August 31, 1970. She obtained her bachelor’s degree in Business Administration from the American University of Cairo in 1991, later pursuing a career in banking in Jordan, followed by a brief career in the information technology sector.

Queen Rania married then Prince Abdullah bin Al Hussein on June 10, 1993.  They have four children:  Prince Hussein; Princess Iman; Princess Salma; and, Prince Hashem. Since her marriage, Queen Rania has focused her energies on creating opportunities for disadvantaged members of Jordanian society and beyond.

Jordanian Family Life – In 1995, Queen Rania established the Jordan River Foundation (www.jordanriver.jo) to improve the livelihoods of families and communities across Jordan, operating income-generating projects and programs to address the problem of child abuse.

Education in Jordan – In April 2008, Queen Rania launched Madrasati, a public-private partnership to renovate 500 needy public schools.  In June 2009, Her Majesty launched the Queen Rania Teachers’ Academy, while in May 2007, she established the Kingdom’s first interactive Children’s Museum (www.cmj.jo).

Access to Quality, Global Education – Her Majesty is UNICEF’s Eminent Global Advocate for Children and was Honorary Chair of the Global Campaign for Education’s Action Week in 2009. Queen Rania has supported Education for All, the UN Girls’ Education Initiative, the In My Name Campaign, and the Class of 2015 to achieve the Millennium Development Goals. During the summer of 2009, Her Majesty launched and was named Co-Founder and Global Co-Chair for 1GOAL, a campaign to promote global education in partnership with FIFA, the World Cup South Africa 2010 and the Global Campaign for Education. Later, in December, Her Majesty attended the launch of VEVO, the world’s largest online music video website, with 1GOAL as their official charity. The same month, Queen Rania spoke at Le Web, the largest tech-conference in Europe, signing up online giants, such as Facebook, Twitter, MySpace, Microsoft, and PayPal to 1GOAL. In recognition of her work to use football to promote education for all, Queen Rania received the FIFA Presidential Award in December 2009.

Cross-Cultural Dialogue – Her Majesty has championed cross-cultural dialogue in the Jeddah Economic Forum, the Kennedy School of Government, Google Zeitgeist, and the Skoll Foundation in the UK. In recognition of Her Majesty’s work, she has been awarded the North South Prize from the Council of Europe, and the inaugural YouTube Visionary Award.

Sustainability – In May 2008, Queen Rania launched the Arab Sustainability Leadership Group, the first of its kind in the region. A year later, they published the Arab Responsible Competitiveness Index on how sustainable practices can solve problems facing the Arab world; Her Majesty wrote the foreword.

Preparing Youth for the Workplace – Her Majesty is Regional Ambassador of INJAZ Arabia (www.injaz.org.jo) which recruits private sector volunteers to teach soft skills to young people. The Queen Rania Centre for Entrepreneurship started in October 2004 to nourish the entrepreneurial spirit and intellectual wealth of Jordan.

For more on Queen Rania, please visit her official website at: