Walking the Talk on Sustainably Financing WHO

Walking the Talk on Sustainably Financing WHO

The COVID-19 pandemic put in stark relief the vital role that the World Health Organization (WHO) plays as the leading global authority for health, not only in responding to health emergencies but also in promoting the right of all people around the world to the “highest attainable standard of health.”

At the 75th World Health Assembly in May 2022, Member States committed to a bold new plan to improve WHO’s financial future through a series of biennial increases to assessed contributions (the dues paid by Member States) and increased flexibility in voluntary contributions.

Over the next eight years, these gradual increases from Member States will help ensure 50% of WHO’s base budget is covered by assessed contributions by no later than the 2030-2031 biennium. Member States also agreed on a series of complementary recommendations to help make WHO’s financing structure more predictable and flexible, thus enabling the organization to maintain independence and deliver more fully on its mandate.

From late January to early February, the WHO Executive Board (EB) is scheduled to take the first step in realizing its commitment to this historic reform, as it approves recommendations for the scale of assessed contributions for the 2024-2025 biennium budget.

At this critical crossroads, Member States must be willing to stand behind and act upon their historic commitment to this bold reform agenda – and not regress.

WHO’s budget is set every two years by the World Health Assembly, the governing body comprised of all WHO Member States. The budget is financed through assessed contributions, or unearmarked “membership dues” from its 194 Member States, which are determined based on a country’s GDP. It is also financed through voluntary contributions, which can come from Member States or private philanthropic donors and can be either earmarked for specific projects or unearmarked.

Without predictable resources from assessed contributions, the vast majority of WHO’s budget has relied on voluntary funds, which are often earmarked to address specific priorities and can be withheld at any time. The inflexibility of some voluntary contributions has prevented the organization from addressing areas of its work that are chronically underfunded. These pockets of poverty will persist and are likely to increase if the sustainable financing and assessed contributions of WHO remain at their current level.

The First Steps Towards a Sustainably Financed WHO

The May 2022 landmark resolution on WHO financing set a gradual path toward fixing WHO’s broken financing. In that resolution, Member States agreed provisionally to an increase in assessed contributions by 20% compared to the 2022-2023 program budget level. The first step in this process will be for the Programme, Budget and Administration Committee of the WHO EB (PBAC) to provisionally recommend the level and breakdown of the next WHO biennium budget to the WHO EB.

Upon PBAC’s recommendation, the WHO EB will have the opportunity to recommend the new 2024-2025 biennium budget, inclusive of the 20% increase in assessed contributions, for final approval by the World Health Assembly in May 2023.

If Member States stick to that plan, it should allow WHO to receive an increase of roughly USD 600 million a year from assessed contributions, a step in the direction of making WHO’s core budget activities more predictably and sustainably financed. 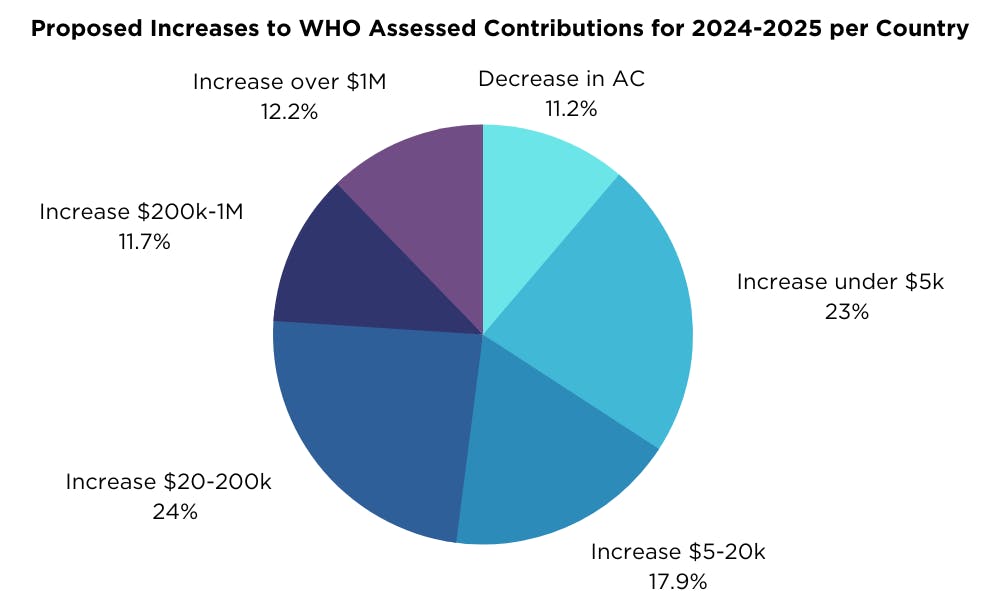 Yet that increase should not be unduly burdensome to any Member States.

For Germany, a high-income country, this means a gross increase of USD 9.44 million over the next two years. This is equivalent to about half the annual salary for Bayern Munich’s right-back, Joshua Kimmich.

For Mexico, a middle-income country, this first increase in assessed contributions will mean an increase of USD 1.1 million over the next two years. This is about 4% of the total fees paid by Mexico to host the 2022 Mexico City Grand Prix.

For Eswatini, a low-income country, this first increase in assessed contributions will mean an additional USD 3,022, about the same as the cost of two roundtrip flights from Eswatini to Switzerland.

The May 2022 resolution also called for WHO to reform some of its processes and systems on financing, human resources, and accountability. Doing so will enhance transparency for Member States in WHO budget matters and increase its impact and value for money. More than 30 reforms have already been put in place, with 60 more in motion.

WHO’s work on this has been guided by a short-term Agile Member States Task Group on Strengthening WHO Budgetary, Programmatic and Financing Governance, which highlighted in its report to the EB future governance reform needs, led by Member States, that would enable even greater transparency and accountability.

The historic consensus achieved by Member States in May 2022 was a blueprint for the future, but not in and of itself a binding document on the level of Member State financing to the organization. At the upcoming PBAC and EB meetings, Member States must follow through on their commitments by approving the first increase in assessed contributions for the 2024-2025 biennium budget and set a strong precedent for years to come.

This first increase will be precedent-setting, a signal of Member States’ commitment to fulfilling their promise for a stronger and more independent WHO.

At this critical crossroads, Member States must be willing to stand behind and act upon their historic commitment to this bold reform agenda – and not regress.

Dana McLaughlin is a Senior Global Health Associate at the UN Foundation, where she has worked since 2016. In her current role, Dana leads the UN Foundation’s work on migration-related health issues and supports the global health team’s work on multilateral partnerships, WHO reform and financing, pandemic preparedness, and global health security. Dana holds a master’s in public health from Johns Hopkins’ Bloomberg School of Public Health. She is based in Washington, DC. You can follow her on Twitter at @dmclaughlin_mph.