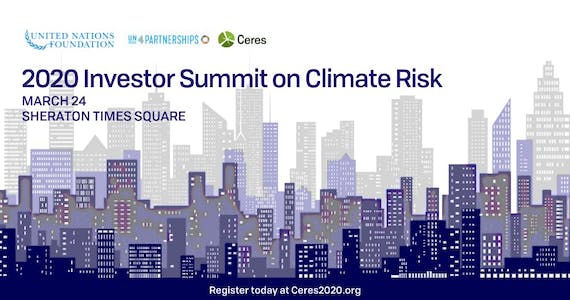 The ninth Investor Summit on Climate Risk, co-hosted by the UN Foundation, Ceres, and the UN Office for Partnerships will mobilize the world’s most influential capital market leaders to scale up and accelerate the actions that are crucial to achieving the goals of the Paris Agreement.

Investors, asset managers, businesses, and other key private sector leaders play an essential role in driving the transition away from fossil fuels and toward a carbon-neutral world. While climate change has received increased attention from the investor community, particularly at the 2019 UN Climate Action Summit, much higher levels of investment are needed to curb the worst climate impacts — two to three times higher, according to recent reports. UN Secretary-General António Guterres recognizes the urgency of closing this gap and is working to press these actors to accelerate the shift from the grey economy to the green economy.

The 2020 Investor Summit on Climate Risk, which will take place in New York at the UN and a nearby venue in March, will be a critical moment for catalyzing investor-led climate action:

On March 23, the Investor Summit opens at the UN with a high-level dinner aimed to drive further progress on several of the major investor announcements from the UN Climate Action Summit last September, such as the alignment of lending and investments with a net zero emissions trajectory by 2050, as well as to build momentum among this community for the 2020 COP in Glasgow.

On March 24, the summit will feature plenaries and interactive group discussions on the key challenges and opportunities for action — ranging from assessing climate risks in portfolios to implementing corporate clean energy commitments — among several hundred investors with trillions of dollars of assets under management.