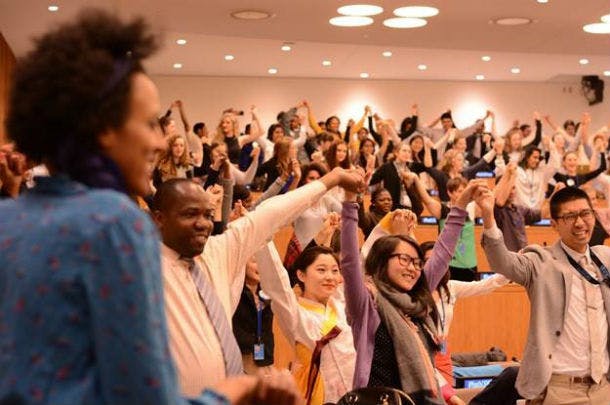 Editor’s Note: Content in this post is graphic. This post is part of the blog series, “Her Goals: Our Future,” which highlights the connections between girls and women and the Sustainable Development Goals. Guest blogger views expressed here do not necessarily reflect the views of the UN Foundation.

In the face of worsening conflict, climate change, and unemployment, the youth of today are arguably unmatched in their relentless drive to affect change in the world through the achievement of the Sustainable Development Goals by 2030.

Today’s youth is the largest in history – and more united than ever – through globalization and technological communication. Their efforts to communicate and have their voices heard go beyond conferences, summits, and discussions.

Indeed, today’s youth are uniquely placed to hold governments, corporations, and other stakeholders in development to account. This is seen through their ability to join large advocacy forces from their own homes in rural villages, or posting experiences and sharing creativity through social media and other relevant platforms.

A recent significant achievement of youth underscores their ability to have their voices heard: For the first time since the inception of the United Nations Commission on the Status of Women (CSW) in 1946, a Youth CSW Forum was held.

The two-day forum, held March 11 – 12 and organized by UN Women and World YWCA, brought hundreds of youth from different corners of around the world – and from all income levels – to UN Headquarters in New York City to engage in workshops and working sessions and to participate in high-level roundtables. The aim was to highlight the unalienable right of young women and men to be agents of their own change, especially for SDG Goal 5: the achievement of gender equality and empowerment of all women and girls.

Representatives from international NGOs worked with staff from UN Women to organize the Forum. The key outcome of the two-day meeting was the development of a set of “Youth-Agreed Conclusions” for the implementation of the 2030 Agenda for Sustainable Development.

Ambassador Patriota, Permanent Representative of Brazil to the United Nations and one of the most progressive developing countries – especially in its youth policies – was the first to receive the Declaration as Chair of the Youth CSW Forum and CSW60. For the first time ever, a youth representative, Vanessa Anyoti, made a statement at the opening session of CSW60 on March 14, highlighting the youth commitment to the 2030 Agenda.

Leveraging the fact that the Sustainable Development Goals are intended to strongly reflect youth ownership and development, the Youth CSW Declaration boldly addressed contentious issues from Post-2015 Agenda negotiations, such as the gender spectrum, sexual health and freedom, and protection of vulnerable persons such as immigrants and sex workers. Great efforts were taken to ensure that issues of particular concern to youth were addressed to raise awareness about the priorities of today’s youth leaders.

The dialogue since Youth CSW has not stopped; daily discussions continue on social media and messaging apps about the next steps to improve youth engagement, organize upcoming events to create awareness and strengthen youth initiatives, and deepen advocacy around the content of the Youth CSW Declaration.

Now, more than ever, attention is being paid to the voices of youth as they work toward and call for the achievement of the Sustainable Development Goals by 2030.

By Mary Kate Costello, Policy Analyst for The Hunger Project. She is one of their five primary UN Representatives, and also sits on the UN’s IANYD Youth and Gender Equality Working Group.