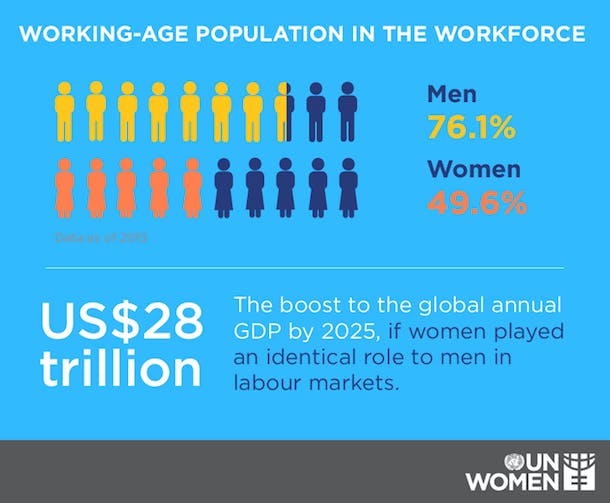 I went to Calvary Women’s Services in Washington D.C. on a February morning to coach, encourage, and learn from women like Grace, and I left recommitted to the United Nations Foundation’s work to help empower girls and women.

In honor of International Women’s Day, a team of UN Foundation colleagues and I spent the morning with approximately 30 women at Calvary as volunteers for a women’s job search boot camp. We fielded questions about job seeking, participated in mock interviews, and shared our own stories about career disappointments and successes, as well as practical advice about drafting a resume or submitting an online application.

Women come to Calvary to begin again – to benefit from the housing, health, education, and employment programs it provides to empower homeless women in Washington, D.C. to change their lives. The women who find shelter there have endured abuse, addiction, and mental illness. Uniquely difficult paths lead women to Calvary, but they are united in their resilience and their desire to work, and they find at Calvary a warm community of peers and staff dedicated to nurturing their ambitions and protecting their futures.

Grace told us she had suffered a new set back. In the midst of a long job search, she had aced a job interview for a promising position at a hotel spa, but it didn’t yield the job offer she desperately wanted and thought she had won. Her confidence was dashed, and Grace was beginning to question if she would ever find decent work.

While the context and the circumstances vary widely, in many ways Grace represents the plight and the potential of women around the world. Women account for half the world’s working-age population, but among women aged 15 and older, only one in two has paid employment, compared with about three in four men. About 700 million fewer women than men of working age had paid employment in 2016. And a New York Times analysis found that more men named John run large companies on the S.&P. 1500 than women.

First, in every country in the world women are burdened by more, and sometimes far more, unpaid care and family work than men, which undermine a woman’s ability to seek and sustain gainful employment. In some countries gender bias or norms, discrimination and discriminatory laws, and a lack of legal protection prevent women from working. In other cases, women lack meaningful access to the education, STEM training, financial services, or the other important assets that are necessary for employment or entrepreneurial opportunities. Women who do find paid employment are more likely than men to hold insecure, low-skill, and lower paying positions.

For all these reasons, this month the UN Women’s observance of International Women’s Day and the 61st Commission on the Status of Women are focusing on the theme of “Women and the Changing World of Work,” and taking up the challenges that block women’s economic opportunities.

The stakes couldn’t be higher, because accumulating evidence suggests that ensuring women’s full economic participation is central to accelerating economic growth, necessary for sustainable development, and key to establishing equality between women and men.

Consider the McKinsey Global Institute’s “Power of Parity” report, which finds that the U.S. could add up to $4.3 trillion in annual GDP in 2025 if women attain full gender equality, and every U.S. state and city can add at least five percent to their GDP by advancing the economic potential of women. Consider that women’s full employment in the Middle East and North Africa could increase household incomes by as much as 25 percent.Additionally, Fortune 500 companies with the best records of promoting women have been shown in repeated studies to be 18 to 69 percent more profitable than the median firm in their sector. Simply put: Enabling women’s leadership is smart economics.

But the benefits of women’s economic participation extend far beyond economic growth. Evidence from a range of countries shows that increasing the share of household income controlled by women creates a virtuous cycle, as they are more likely to invest in products and services that increase the welfare and productivity of the family, such as food, health care, education, child care, and savings. Further, increases in training, employment, and earnings boost women’s self-esteem and bargaining power at home, reducing domestic mistreatment and violence, and allowing them to delay early marriage and pregnancy.

In fact, the potential for women’s full economic participation to transform our societies is so critical that its establishment is enshrined in the Sustainable Development Goals and reflected in several targets of Goal 5, “Achieve gender equality and empower all women and girls.”

Whether a farmer in Uganda, a garment worker in Bangladesh, or a receptionist in Washington D.C., our global fate is tied to our willingness to unleash the full economic potential of women, to harness the resilience and capacity of women like Grace.

On International Women’s Day, March 8, I will be thinking about her and the power all women have to transform their own lives, and all of ours, too.