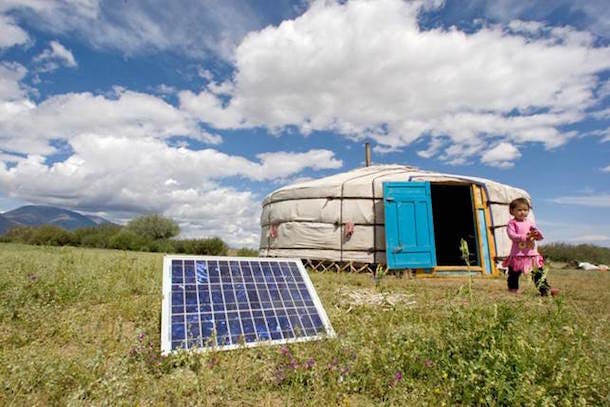 We often take for granted how valuable energy is. We think little about the simple act of flipping on a light switch to read a book or turning on the TV to watch the news. We hardly give a second thought to the ability of turning on a stove to make a hot meal. Energy is a central part of creating opportunities for all members of society – but because it is often unsustainable, it is also one of the world’s biggest challenges. Having access to energy is wonderful, yes, but access to clean, sustainable energy is something that we all need to unite behind in order to see real world progress.

Last year, countries came together at the United Nations and adopted the Sustainable Development Goals, which address root causes of poverty. Goal 7 works to ensure access to affordable, clean, sustainable energy for all. This goal is significant not only because one in five people lack access to modern electricity, but also because energy use is responsible for around 60% of greenhouse gas emissions; energy is a dominant contributor to climate change. Providing global access to sustainable renewable energy like solar and wind power would be widely beneficial for the planet and all people, but especially for women and girls.

According to the World Health Organization, around 3 million people cook and heat their homes with open fires and simple stoves by using wood, charcoal, kerosene, animal/crop waste, and coal. Due to traditional gender roles, women and girls are often responsible for heating the home and cooking meals for their families. They are directly exposed to toxins from the fuels that they use which negatively affect their health and safety. Without access to electricity, daylight is often devoted to household chores, limiting women’s and girls’ educational opportunities and livelihoods. As the primary resource managers for their homes, women internationally, as well as in the U.S., need to be placed at the forefront of the fight for energy access through cleaner and more sustainable energy.

This need for clean energy access isn’t solely an international issue. Here in the U.S. there is a clear need for the use of cleaner energy. Earlier this month, President Obama released a public health report as a part of the administration’s Climate Action Plan. The final report built upon what we know about climate disruption – it’s one of the biggest threats against the health of American people and vulnerable populations like women and girls will be hit first and worst.

While combatting the effects of climate disruption, we need to make a point to bring women into the clean energy conversation. Integrating women into all levels of renewable and clean energy innovation will lead to more effective clean energy initiatives. By increasing women’s participation and influence on a local and larger scale, countries can tap into a vast source of potential that resides within women whose voices aren’t being heard. With access to opportunity, women can be a large contributing part of a more sustainable future.