A new report from the World Health Organization (WHO) released this week reveals that 93% of all children live in places with air pollution levels above levels that are simply too high. And according to a recent study from George Washington University, one in three cases of asthma globally is tied to air pollution – that adds up to some 33 million visits to emergency rooms.

These findings are timely as this week, the WHO, the World Meteorological Organization, the UN Convention on Climate Change, and UN Environment are holding their first-ever Global Conference on Air Pollution and Health from October 30—November 1 in Geneva, Switzerland.

Although pollution may seem like an environmental problem, WHO’s mandate to tackle this issue stems from its severe health implications: an estimated 7 million people die annually because of toxic air pollution. Put in perspective: more than 1,000 people die every year from air pollution in Los Angeles alone.

We see the connections among the Sustainable Development Goals (SDGs) in many global issues, such as hunger and conflict – and air pollution is no exception. As economies and carbon footprints grow, urbanization accelerates, and global temperatures rise, our air quality deteriorates. This pollution leads to asthma, cancer, heart disease, to name just a few of the leading contributors to early deaths.

Therefore, we need innovative strategies, interventions, and partnerships that tackle the climate-health nexus head-on. Put simply, the health and climate communities need to take on this challenge together.  Achieving climate action (SDG 13) is critical for good health and well-being (SDG 3).

Recognizing this nexus, the conference organizers assembled an interdisciplinary group of health and environment and other government representatives; representatives from the transport, energy, and other climate-related sectors; civil society experts; health professionals; and members of the research and academia communities—all to find innovative solutions to the ever-growing problem of air pollution.

The solution of clean cooking, which is a focus at the conference, is a prime example of a win-win scenario for climate and health. Reducing air pollutants from dirty cooking fuels and inefficient cookstoves is better for the health of millions of girls and women – and it’s better for the climate.  The Clean Cooking Alliance, housed at the UN Foundation, is working at the center of this issue.

After identifying gaps and solutions to address the creation of air pollutants and their public health impact over the first two days of the conference, the third day focused on concrete action steps. Government Ministers across sectors, mayors, heads of intergovernmental organizations, and others made voluntary commitments, launched new initiatives, and provided financial support to tackle air pollution.

WHO specifically committed to five actions during the conference related to reducing air pollution and advancing health, including working towards universal electrification of health facilities with sustainable energy by 2030. The UN Foundation is proud to work with WHO, Sustainable Energy for All, and other partners on the Powering Health Care initiative to address this problem. In addition, WHO also committed to increasing political leadership, harnessing the power of health workers, expanding the air pollution program, and fostering strong international mechanisms.

This conference is a bold first step in attempting to stop the pollution that causes both significant health issues and irreversible damage to our fragile environment. Coming on the heels of the recent report from the Intergovernmental Panel on Climate Change (IPCC)—which calls for aggressive action if we want to delay catastrophic climate events set to occur as early as 2030—it’s clear we need to take immediate steps to limit pollutants.

We can no longer continue a “business as usual approach” if we want to come close to tackling the enormity of this issue. Interventions that span the energy, transport, and health sectors are needed, and the global community looks to the outcomes of this conference to help lay the groundwork for swift multisectoral actions.

Making Markets Work for All: Building the Health Systems of the Future

A New Era of Partnership at WHO 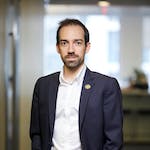 The Power to Save Lives