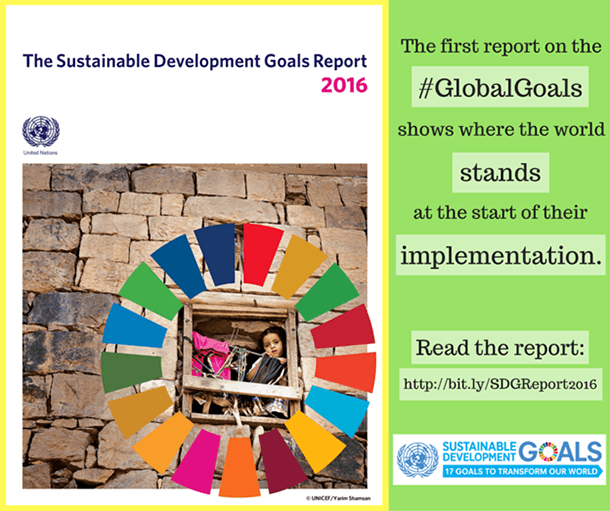 Earlier this week, the United Nations released the “Sustainable Development Goals Report 2016” to provide an accounting of where we are on the global goals, a set of 17 interconnected, universal, and transformative goals adopted by world leaders at the UN last year. The goals provide a framework to end poverty and fight inequality, promote inclusive economic growth, and tackle climate change and environmental destruction.

The report comes as ministers from around the world gathered this week at the UN for the first “High-level Political Forum on Sustainable Development” since the launch of the Sustainable Development Goals. It is significant that world leaders chose the theme of “Leave No One Behind” for this year’s Forum, which provides an annual opportunity to assess progress on the goals and to share ideas and lessons learned. As part of this Forum, 22 countries have volunteered to report on their plans for implementation of the goals, as well as progress achieved so far.

As we take stock of where we are on the road to a better world, what do we know? Here are five key takeaways from the report.

1. We have a lot of important work to do.

The report lays out sobering figures about the scope of our challenges – and why our collective efforts are so important. While the Sustainable Development Goals call for ensuring “that all human beings can fulfill their potential in dignity and equality and in a healthy environment,” we know that:

2. Despite challenges, we CAN make progress.

While the challenges are serious, we know that when the international community mobilizes around common goals and concrete targets, we can create change in the world. We are making concrete progress on many issues that are enabling people to lead healthier, more secure, and more prosperous lives:

3. We need to focus on reaching vulnerable populations to fulfill the promise of the Sustainable Development Goals to “leave no one behind.”

While the world has taken important steps forward, millions have been left out of progress, especially vulnerable populations such as adolescent girls, refugees, and those hardest to reach or marginalized in their communities. We must focus on reaching these populations first if we are going to deliver on our promise of a life of dignity and opportunity for all.

For example, health systems are often weakest in rural and remote communities, the youth unemployment rate is more than three times higher than the rate for adults, and children from the poorest households are more than twice as likely to be stunted as their richest peers.

4. We must take action to address climate change as our social, economic, and environmental challenges are interconnected.

We can’t separate people from the planet. As the report notes, “Climate change represents the single biggest threat to development, and its widespread, unprecedented effects disproportionately burden the poorest and most vulnerable.”

Already we are feeling the effects of climate change, which has contributed to more severe weather events. In turn, these natural disasters can devastate families and plunge them back into poverty. From 2000-2013, an average of 211 million people were affected by natural disasters annually.

5. Increasing and improving data will be key to helping us reach our goals.

As highlighted in the report, “Every journey has a beginning and an end. Plotting that journey and establishing key milestones along the way requires accessible, timely, and reliable disaggregated data.”

The need for more and better data to track progress and guide the development of policies and programs is as immense challenge and opportunity. Many countries need stronger statistical systems and we collectively need better insight into the lives of people around the world, especially vulnerable populations. This will require new resources, new technologies, and new ways of understanding and sharing information.

The Sustainable Development Goals created an ambitious agenda for people and the planet – and delivering on ourgoals won’t be easy. But a better world is possible, and we will need the ideas and engagement of every country, sector, and individual to transform the world we have into the world we want.

Read the report to learn more.