What We Said to Congress: Key Quotes on the Value of the UN

What We Said to Congress: Key Quotes on the Value of the UN 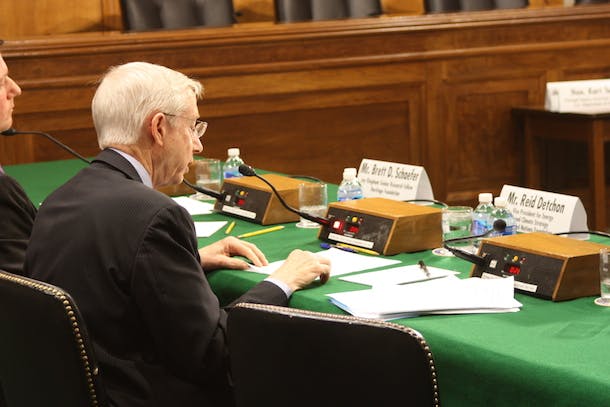 Yesterday, United Nations Foundation Vice President for Energy and Climate Strategy Reid Detchon testified before a subcommittee of the U.S. Senate Committee on Foreign Relations about the importance of the United Nations in advancing progress on global challenges, especially the threat of climate change.

Here are key quotes from his testimony:

On the Value of the UN:

“The U.S. has played a central role in the UN’s work from the very beginning, and will continue to do so as long as the organization exists. The benefits to our nation and to the world range from peacekeeping to humanitarian relief, as the UN takes on the problems that are too tough for anyone country to handle.

“One need look no further than the current work being undertaken by UN humanitarian agencies to help feed, shelter, and provide medical care to millions of people in earthquake-hit Nepal, or efforts by the UN and partners to vaccinate more than one billion children against polio over the years, to understand the ongoing need for this type of multilateral institution.”

On the Importance of the UN in Addressing Climate Change:

“The United Nations’ most important role is to serve as a convening body for the world’s nations to address global challenges… The challenge of assessing and responding to the threat of global climate change is a textbook case of the UN’s value to the international community.

“If confronted with a problem of global scale and significance, anyone would want to assemble the best experts from all over the world to assess it and propose possible responses. In fact, that describes exactly what the UN has done with regard to climate change. For such problems, it is often said that if we didn’t have a UN, we would have to invent it.”

“No country likes to be told what to do – not the U.S. or China or India. Instead, the agreement being forged for Paris will build on national commitments to action, taken in each country’s own self-interest.”

“[The agreement expected to be reached in Paris] reflects a new global approach to climate action, based on leadership by companies and by governors and mayors in addition to national governments.”

On the UN Secretary-General’s Sustainable Energy for All Initiative:

“Sustainable Energy for All also represents an innovative new partnership model for the UN, bringing the public and private sectors together on equal footing to support best policies and practices and mobilize private investment toward common goals.”