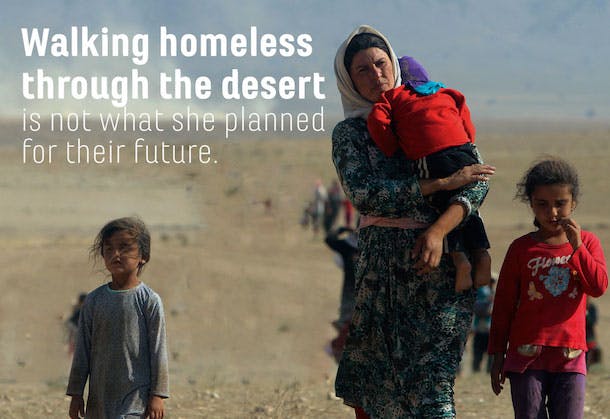 This is a guest post by Hamdi Ulukaya, Founder and CEO, Chobani

Like many entrepreneurs, I am often asked for advice on building a successful career: “How did you create a food business that has grown faster than many of the world’s most famous tech start-ups?”

I tell people that whether you’re in Silicon Valley creating apps, or in Unadilla Valley in upstate New York making yogurt, there’s many common ingredients in success.

In the decade since I began the Chobani business, dramatic changes have occurred in the region where I was born. Conflict has engulfed Iraq and Syria, forcing millions of people to flee from their homes and seek refuge in neighboring countries. When I watch the reports from towns like Kobani, I see a haunting despair in the eyes of refugees. Their faces seem familiar – just like my aunts, uncles, and childhood friends. But the fear in their eyes feels very different. I can’t imagine what it must be like to flee with your family, not knowing if your grandmother will survive the journey or your daughter will ever see home again.

In the past, the world has risen to the moment and responded to similar crises. Refugees from wartime Europe were taken in by dozens of countries across the world in the 1940s and 1950s. Likewise, victims of conflict in Vietnam, Cambodia and east Africa in the 1970s, and those from the Balkans in the 1990s, found welcoming new homes in faraway countries.

I am now speaking out because we as a global community must come together and take action to support the Syrian people. Neighbouring countries and agencies like the United Nations High Commission for Refugees (UNHCR) and the International Rescue Committee, desperately need financial support to be able to provide the basic life essentials for the men, women, and children who have fled across borders to safety. The impact of the work of these agencies is breathtaking. Their staff risk their lives every day for people they don’t even know. Yet this year, not even half of the funding needs for Syrian refugees were met. Funding for refugee relief is running dry, leaving women and children in danger of their lives.

I am astonished by how little most of us know about the conditions that refugees are suffering in countries that are only a few hours’ flight from the world’s richest capitals. This is the 21st century. We are no longer isolated, one corner from another: We are all connected by technology and communications. How can it be, that some can enjoy a beautiful life and allow others to live as if they’re part of a totally different world?

Of course generosity starts with us as individuals. But the needs are far too immense for private donors to ever close the gap. Governments around the world must step up, just as they’ve done in the past, to show the world’s solidarity with innocent victims robbed of the opportunity to live in safety.

We need a change of heart, and we need voices to rise up around the world to urge action. For my part, I have supported UNHCR’s immediate efforts to get winter supplies sent to refugee camps. I am also supporting new campaign initiatives to help advance long-term solutions to the crisis. These efforts will bring the voices of millions of concerned citizens to decision makers around the world and elevate the powerful voices of refugees themselves.

Yesterday, December 18, governments convened in Berlin at a conference hosted by the German Government to pledge emergency funding to UN agencies for their immediate humanitarian relief efforts in Syria.  The total UN funding need for Syria for 2015 is $7.2 billion, which is 43% of the UN’s total funding needs for all of their humanitarian work in 2015.  This funding needed for Syria is more than the UN 2015 funding needs are for their work in Afghanistan, the Central African Republic, the Democratic Republic of Congo, Iraq, Sudan, and Yemen combined. This funding is critical for the survival of these refugees and for our world to have the opportunity to thrive in this region.

In 2015, and for as long as this crisis persists, I am committed to waging a campaign, in partnership with UNHCR and global civil society, that demands real actions from the world’s leaders. And I am asking entrepreneurs who every day make great things happen in their businesses to make great things happen internationally to address this injustice.

This is what it means to have a human heart. Not to avert our gaze from others’ suffering, but to step forward. To open our arms. To lift our voices, and call for our leaders to wake up. And to do our duty to these sons and daughters, brothers and sisters who are all part of the one human family. As those blessed with opportunity in our own lives, we must restore opportunity and hope to theirs.

[Tweet this story: “This is what it means to have a human heart. Not to avert our gaze from others’ suffering, but to step forward.”]