UN Press Conference: 3 Key Points on the Response to Ebola

UN Press Conference: 3 Key Points on the Response to Ebola 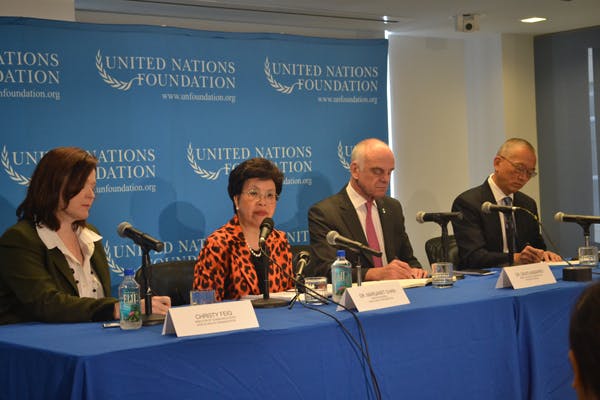 On Wednesday, senior leaders from the United Nations updated media on the response by the UN and its agencies to the Ebola crisis, which has caused about 1,900 deaths in West Africa.

Dr. Margaret Chan, Director-General of the World Health Organization (WHO), Dr. David Nabarro, Senior UN System Coordinator for Ebola Disease, and Dr. Keiji Fukuda, WHO’s Assistant Director-General for Health Security provided information on WHO’s Ebola Response Roadmap and what needs to be done to bring the outbreak under control and save lives.

Here are three key points on the response:

1.    This is a complex, multi-faceted challenge that requires a robust response. Dr. Chan began the press conference by noting that this outbreak is the largest, most complex, and most severe in Ebola’s history.

Additionally, steps need to be taken to strengthen the economies and primary health care systems in countries where they are strained because of Ebola.

2.    The Ebola crisis is a global problems that requires a global solution. In our connected world, disease outbreaks don’t stop at borders. The countries affected by Ebola are leading the response to contain the outbreak, but the international community must step up its efforts to support them now. Additional technical expertise and resources are desperately needed. The price tag for the response is estimated to cost $600 million and may go higher.

Additionally, we need to make sure Ebola patients and Ebola-affected countries aren’t stigmatized and isolated. Measures like stopping flights to and from countries with widespread transmission is counterproductive, making it hard for aid to get to where it’s needed.

3.    The Ebola outbreak can be stopped, but the response must be urgently scaled up. UN leaders believe Ebola can be stopped, and the roadmap released by WHO aims to stop transmission in 6-9 months. But the international community must act now to increase the global response. As Dr. Nabarro said, we can’t afford to lose a day.