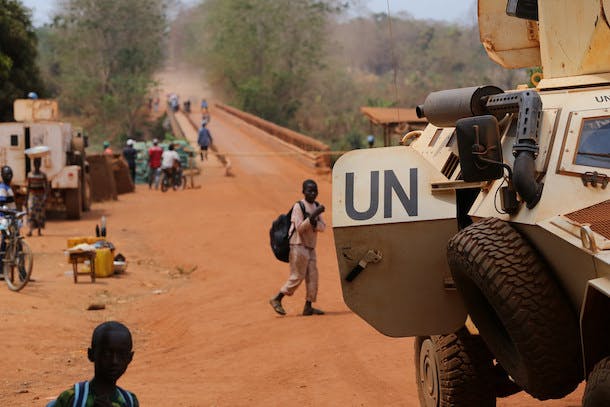 As we speak, the UN Peacekeeping mission in the Central African Republic, MINUSCA, is working around the clock outside of the town of Bambari to protect tens of thousands of civilians – many of whom are internally displaced – from encroaching rebel fighters.

The religious and ethnic tensions in CAR coincided with the 20th anniversary of the genocide in Rwanda. The international community’s reminder of the failures of the UN in Rwanda helped deploy a mission to Central African Republic in 2014 to keep the promise of “never again.” Since then, the mission has worked tirelessly to prevent a genocide and protect religious minorities in the country.

Just last December, Evan Cinq-Mars, advocate and policy advisor at the Center for Civilians in Conflict, a nonprofit organization dedicated to advocating for the protection of civilians, traveled to CAR as part of an independent look at MINUSCA. Since his return, Cinq-Mars has praised the peacekeeping mission for its performance in defending Bambari:

“MINUSCA, the UN peacekeeping mission in CAR, is robustly protecting tens of thousands of vulnerable people in the town, many of whom have already been displaced by the conflict. The Mission has reinforced its presence and fired directly on rebel fighters several times using attack helicopters. This is some of the toughest action we’ve seen by a UN peacekeeping operation to protect civilians. …What’s happening in Bambari right now is why UN peacekeeping is so important – and it’s why the US must continue to support it.”

UN Peacekeepers rarely make the headlines when they’re doing their job well. MINUSCA is just one of the many examples around the world where UN Peacekeepers are helping save lives and maintaining stability in the region so the U.S. doesn’t have to send in its own military.

The international community cannot afford another large-scale crisis right now with four looming famines in South Sudan, Yemen, Somalia, and northeastern Nigeria. Furthermore, MINUSCA has an important role to play in preventing CAR from becoming a failed state susceptible for terrorist organizations like Al-Qaeda, ISIL, and Boko-Haram that lurk in the region.

With the U.S. Administration intent on prioritizing national security, we need more examples like this one to start making the front pages. The bottom line is that robust support for UN Peacekeeping is very much in our national security interest and true to our American values. Help us spread the word.