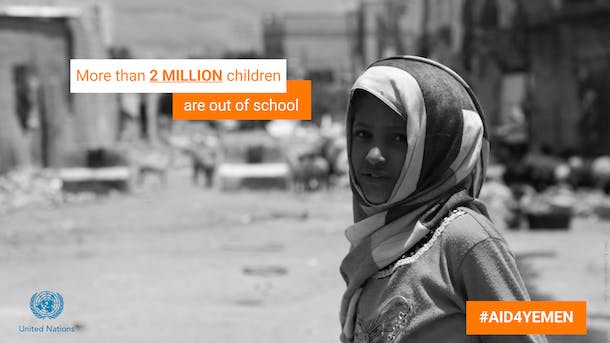 “I wish I could go back to school and continue my studies.”

“I was forced to leave my house by the warring parties.”

“We say our final prayers every time we hear the warplanes hovering in the skies. We live in constant fear.”

“I’ve spent three months waiting to receive my salary. I am tired and would like to rest, but I need to feed my family.”

These are words from people in Yemen whose lives have been upended by ongoing conflict in the country.

On April 25, the United Nations is holding a high-level event to mobilize greater support and resources for the humanitarian response in Yemen. Fighting in the country has devastated people throughout the country – families forced from their homes, children who can’t go to school, and parents wondering how they are going to feed their kids.

According to the UN Office for the Coordination of Humanitarian Affairs (OCHA) around two-thirds of the population, or 18.8 million people, are in need of aid. Famine is a looming threat, and OCHA reports that 14 million people are currently food insecure.

UN Emergency Relief Coordinator Stephen O’Brien said, “If there is no immediate action, and despite the ongoing humanitarian efforts, famine is now a real possibility for 2017. Malnutrition is rife and rising at an alarming rate.” He added, “A staggering 7.3 million people do not know where their next meal is coming from.”

UN agencies and humanitarian partners are actively working to help the millions of Yemenis – including children – in need of aid. Below is an overview of how the UN is responding, and what you can do to help provide #Aid4Yemen.

The Office for the Coordination of Humanitarian Affairs (OCHA)

OCHA works to coordinate humanitarian action, and has called for a total of $2.1 billion for the humanitarian response plan for Yemen. To date, only 15.2% of the funds needed have been received.

Donate to OCHA’s humanitarian fund in Yemen to help get aid to people in need.

WFP is working to alleviate suffering in Yemen by providing food assistance and important logistical help for humanitarian workers through its UN Humanitarian Air Service. In February 2017, WFP helped than 5 million people in the country, providing food or vouchers to exchange for food in shops. Due to limited resources, WFP has had to reduce its rations for hungry families. However, there is an urgent need for more funding as WFP needs nearly $950 million in 2017 to provide crucial food assistance and nutrition interventions.

Donate here to help the WFP avert famine in places like Yemen.

In 2016, UNICEF helped vaccinate 4.8 million children against polio and treated 182,000 boys and girls for severe acute malnutrition. UNICEF hygiene kits reached 340,000 Yemenis and around 3 million people gained access to water thanks to UNICEF’s construction and rehabilitation of local infrastructure. While this is encouraging, it is not enough. In 2017, UNICEF needs over $235 million in funding to achieve its targets, including clean water and education.

According to recent UNFPA assessments, child marriage and violence against women are on the rise in Yemen. The health of more than 2 million women and girls of childbearing age is also at risk as the health system crumbles in the country, which already has a high maternal mortality rate. UNFPA is supporting reproductive health services for girls and women, as well as providing survivors of gender-based violence with legal, psychological, and health services.

Donate here to support UNFPA’s emergency responses around the world.

UNDP has been active in Yemen, working with partners to restore infrastructure, provide income-generating opportunities for families, remove debris and rubble, and more. UNDP has also supported Yemen in locating and removing explosive hazards, a challenge that has grown during the recent years of conflict.

WHO has led a nationwide immunization campaign against polio. So far, it has successfully vaccinated nearly 5 million children under age 5. The organization is also working to support health facilities in the country, provide medicine and supplies, and treat cholera.

A Need for Political Dialogue and Peace

“Conflict, insecurity, and the cynical tactics of the warring parties have wrecked Yemen’s economy, made food increasingly scarce, displaced 3 million people from their homes, and impeded the work of humanitarians – whose only aim is to alleviate suffering and save lives. …

“The UN and partners are already providing life-saving assistance in all of Yemen’s 22 governorates. We reach almost 6 million people every month. We can and must do more, but urgent funding is needed in coming weeks – or it will be too late.

“Most of all, the Yemeni people need the parties to commit to political dialogue, or this man-made crisis will never end. In the meantime, together we can – we must – avert this famine, this human catastrophe.”