UN History: What is Ratification?

UN History: What is Ratification? 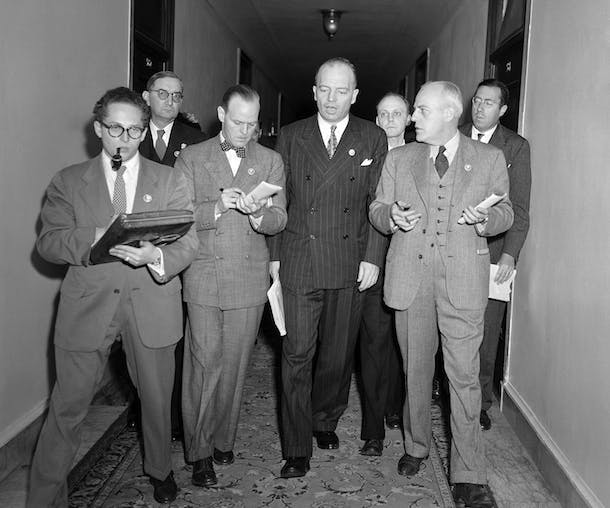 Editor’s Note: This post is the fourth in a series of blog posts on the founding of the United Nations 70 years ago. You can read the first post here, the second post here, and the third post here.

Which of the Big Five was the second to ratify the United Nations Charter after the U.S.? France. But what does ratification actually mean? Why didn’t the UN just spring straight into existence after 50 nations signed the UN Charter in San Francisco on June 26, 1945?

Spectacular ceremony often accompanies the signing of a treaty or charter. But for international treaties like the UN Charter, each signatory state has to agree to the principles of the document and approve it through the country’s particular constitutional procedures.

Ratification was a three-step process. First, a country’s parliament or parliamentary bodies had to approve the Charter, if that was foreseen in the country’s constitution. In the British case, for example, that meant votes in both the House of Commons and the House of Lords.

Second, a country’s head of state had to sign the Charter. The formal signing ceremony often took place weeks or months after a vote to ratify the Charter. In France, General de Gaulle and Foreign Minister Georges Bidault signed the Charter themselves on August 17, 1945, because France at that point had not yet reassembled a parliament.

Third, the country had to deposit a protocol of the ratification to formally register the process. Nicaragua was the first country to announce its intention to ratify the Charter in early July. This was a month before the American President Harry Truman signed the Charter. But Nicaragua only deposited the ratification documents in September. As the host for the San Francisco conference, the United States took on the role of collecting the ratifications. It was also up to the U.S. Secretary of State to sign a Protocol of Deposit of Ratifications

Article 110 of the Charter stated that the document would come into effect when the five permanent members of the Security Council (China, France, the USSR, the UK, and the U.S.) along with a majority of the other states had deposited their ratifications. On October 24, 1945, Ukraine, the USSR, Belarus, and Poland all ratified the Charter. The five permanent members of the Security Council and 24 other states deposited their ratifications with the U.S. government. The U.S. Secretary of State signed a Protocol of Deposit of Ratifications that listed the countries that had completed ratification. 29 of the original member states had deposited ratification. The Charter could come into force.

But the ratification process continued. It took until late December 1945 for all the original member states to ratify the Charter.

The ratification process seemed rather piecemeal. It was more drawn-out than the dramatic signing ceremony in San Francisco with 50 speeches and 50 flourishes of the hand. But it helped each country to comprehend and commit to the UN. It pushed populations to think about the future as much as repairing the dreadful damage from the past. It inspired debates about how to make the Charter “a workable instrument,” as three-time Foreign Secretary and future British Prime Minister Anthony Eden put it in a debate in the House of Commons.

Ratifications are complicated but essential. They happen with national treaties too. Still, the complexities of ratification increase exponentially when dozens of nations are involved. Ratification was not simple. But it was very much unanimous.