UN History: Getting to an Agreement

UN History: Getting to an Agreement 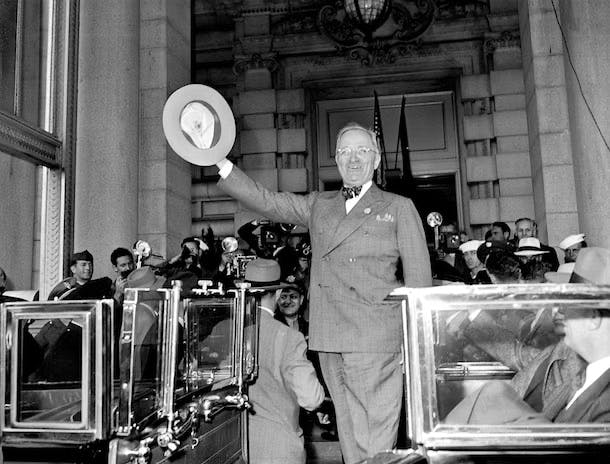 Editor’s Note: This post is the fifth in a series of blog posts on the founding of the United Nations 70 years ago. You can read the first post here, the second post here, the third post here, and the fourth post here.

President Truman had to stay flexible. He was dealing with the war in Asia. He had to plan for a conference in Europe with Britain and the Soviet Union to discuss the aftermath of peace in Europe. Plus he had to make time to fly to San Francisco to sign the UN Charter.

But the news from the West Coast in mid-June 1945 made it hard to plan. The San Francisco conference was originally supposed to end on June 20. The delegates tried desperately to keep the date, but it was impossible. Just a week before, the end of the conference had to be postponed. The signing ceremony was delayed one more time before the Charter was finally signed on June 26 with 50 rousing speeches from the 50 national delegations. As president of the host country, Truman of course made it to the festivities.

But what disagreement had caused the delay? There were many topics that inspired debate between the representatives of the 50 countries at the San Francisco conference to create the UN Charter in 1945. But only one issue was so contentious that it pushed back the signing of the Charter by nearly a week. It was, perhaps unsurprisingly, the question of the Security Council.

At the Yalta conference in February 1945, the Soviet Union, Britain, and the U.S. had agreed to create a veto power on military interventions at the new United Nations. As long as they were not part of the dispute, the Big Five would be allowed to veto arbitration or intervention by the UN in international disputes. For many, this seemed the best method to ensure that the great powers would support the international organization. The UN had to be different than the League of Nations that had failed to retain members. The veto could create “buy-in” and prevent a member from leaving or not joining the organization in the first place.

At the San Francisco conference, that logic ran into opposition. The Big Five took 19 days to decide upon their vision for the voting procedures. Many delegations believed that they should have faith in the Big Five and their ability to design a reasonable veto system.

But others disagreed. The Australian Foreign Minister and Attorney-General, Dr. Herbert Evatt, took particular umbrage. Evatt believed that the veto curtailed the power of smaller and mid-sized nations like Australia. He found it unfair that one nation could prevent conciliation even if all the other permanent and non-permanent members of the Security Council supported the measure.

As Commission III worked toward a vote on voting procedures at the UN, Evatt intervened with an amendment to remove the veto power. Evatt received support from nations like the Netherlands. Others, like Peru, wanted to change the procedures either to eliminate the veto or to allow nations to withdraw from the UN.

The Big Five disagreed. Debates raged in the days leading up to the vote on Evatt’s amendment on June 13. The Chinese delegate Dr. Wellington Koo urged conciliation. “If a choice had to made between an ideal system and an effective system, we will prefer the second,” he noted. Like any international treaty, the Charter was a compromise between competing visions of the global order.

Led by Thomas Connally, a Democratic senator from Texas with tortoise shell glasses and flowery oratory, the Big Five campaigned to keep the veto. In the committee meeting to discuss Evatt’s amendment, the British ambassador to the U.S., Earl of Halifax, clearly stated that the Big Five would refuse to join the UN without the veto.

Connally’s rhetorical gifts came to the fore, as he rose to enter the discussion. He believed that the Australian proposal to remove the veto would promote disagreement rather than unity. “Do you want to go home and say, ‘We defeated the veto,’ and then, when asked, have to admit ‘but we have no charter?’” Connally cried.

Worked into a frenzy, Connally ripped up a sheaf of documents in his hand and thundered, “I will not vote to tear up the charter.”

New Zealand, meanwhile, stood up to defend its neighbor. Prime Minister Fraser declared that the Australian proposal was meant to strengthen the charter. He wished to express his opinion. In the end, however, supporting the charter was more important.

Just after midnight on June 13, a vote was finally taken on Evatt’s proposal. Twenty nations rejected it. Ten nations supported Evatt, but with 15 abstentions and 5 absences, the effort was thwarted.

After the first delay to the end of the conference, President Truman started to make arrangements to fly to San Francisco for June 23. But Soviet objections threw a spanner in the works. The Soviet Union was concerned about the powers of the General Assembly vis-à-vis the Security Council.

Emergency meeting after emergency meeting followed. Six meetings later, an emergency subcommittee was formed to resolve Soviet concerns. The subcommittee included American Secretary of State Edward Stettinius, Soviet Foreign Minister Gromyko, and Evatt from Australia. The dispute was resolved on June 20, when Commission III approved the procedures governing the General Assembly’s rights of discussion. Along with Columbia, the Netherlands, and others, Evatt still staunchly criticized the veto as “indefensible.” But he accepted it for the sake of the broader goal of establishing the United Nations.

On June 25, Truman finally travelled from Olympia, Washington, where he had been on holiday, to San Francisco. Truman led a parade of 75 cars that crossed the Golden Gate bridge and drove through San Francisco streets before cheering crowds of thousands. The next day, Truman gave the closing address to conference delegates in the San Francisco Opera House. He compared the Charter to the U.S. Constitution. Both were living documents for Truman. Neither was final and neither was perfect. “Changing world conditions will require readjustments,” declared Truman. But this time, “they will be the readjustments of peace and not of war.”