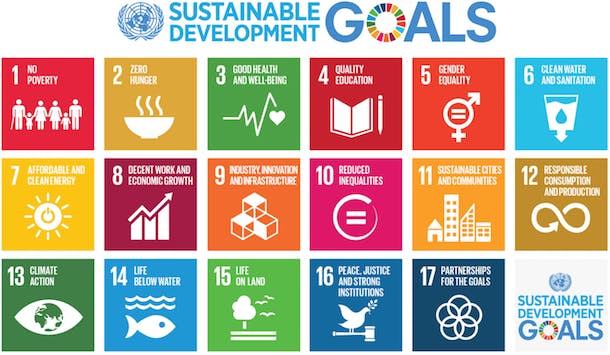 We live in a world that is increasingly defined by competition – for resources, profits, shareholder value, and relevance. And while competition is often viewed negatively, it also has the potential to drive innovation, performance, and accountability. Consider the impact we could then have by harnessing our inherently competitive spirit for the collective good of mankind. Sound far-fetched? Maybe not.

The Sustainable Development Goals (SDGs), adopted by 193 countries in September 2015, outline a framework for a better global future by 2030. With goals spanning a range of issues, including the elimination of poverty, gender equality, climate action, and peace and justice, the SDGs provide a roadmap for governments, businesses, civil society, and individuals to take action on some of the most pressing issues confronting our world in the pursuit of a more prosperous, inclusive, and peaceful world. They are ambitious, apply as much to New Delhi as they do to New York, and are changing the way we all think about and approach our work in global development and international cooperation.

The SDGs also require ambitious resources; early estimates suggest that meeting our targets within our 13-year timeline will require annual incremental investments of between $5-7 trillion – a figure higher than the market values of Amazon, Apple, Facebook, Google (Alphabet), and Microsoft combined.

Such investments will be impossible to mobilize without concerted commitments from and actions by the private sector. While the scale of the challenge seems immense, we are seeing private sector leaders embrace sustainability in real, transformational ways like never before. We know that this is in part because the economic arguments for these investments are compelling. A groundbreaking report from the Business and Sustainable Development Commission (BSDC) outlines a $12 trillion market opportunity and the creation of up to 380 million jobs for businesses that embed sustainability and SDG targets within their core business models.

We know too that consumers, employees, investors, and other actors are increasingly looking at businesses to embrace their roles as key drivers for broader impact. A 2015 report on consumer expectations from Nielsen found that of the 66% of respondents who were willing to pay more for products by sustainable brands, over 50% of them were influenced by other sustainability factors, including whether products were sourced ethically, whether production practices had minimal negative externalities on the environment, and whether the company had a demonstrated  commitment to social value.

And companies are responding accordingly, as evidenced by the over 9,000 companies that have signed up to the 10 Principles of the UN Global Compact, a guide to sustainable business behavior. The shift toward more sustainable investment practices is becoming increasingly common as investors incorporate so-called Environmental, Social, and Governance (ESG) criteria into their decision-making processes and businesses incorporate ESG frameworks into their sustainability reporting efforts.

But more is needed to make these reporting efforts work for all actors –  from individual companies to sector-based industries to investors, NGOs, and consumers.

A 2016 survey by PricewaterhouseCoopers found that 92% of investors say that companies are not disclosing their ESG data in a way that makes it easy for investors to compare to other companies. Sustainability reports released by companies may also be hidden behind expensive paywalls or hard-to-decipher data points, making it difficult to assess corporate performance and make decisions regarding existing or new investment portfolios. For those relatively few but influential companies (like Novo Nordisk,Safaricom, and Roche) that have taken ESG reporting a step further by integrating the SDGs into their broader ESG criteria, this challenge is further compounded by the low rate of adoption in practice by their industry peers.

When considering both the imperative and the benefits for the private sector to deliver substantial action on the SDGs, the opportunity is ripe – and now – for a system-wide disruption.

Enter the World Benchmarking Alliance (WBA), an initiative that aims to create free, transparent, and comparable rankings of companies’ performance toward achieving the SDGs.

In partnership with Aviva, the UN Foundation, Index Initiative, and BSDC, the WBA is a direct recommendation of the BSDC’s flagship report and, this September, kicked off a global consultation effort to ensure that its work builds on existing efforts already available and really listens to what consumers, NGOs, and companies themselves want to see from this bold new idea. The vision of this alliance is to catalyze an environment in which everyone has access to information on corporate SDG performance to reward businesses that are doing well… and motivate those that are perhaps lagging behind.

By turning sustainability into a competitive race to the top, the hope is that the WBA will empower society: businesses to stimulate longer-term performance; consumers to make more informed decisions on where they spend their money; investors to rely on better data in gauging investment risks and rewards; civil society to engage in more effective partnership and advocacy efforts; and government to more efficiently formulate, implement, and measure the impacts of their policy recommendations.

It may seem like November 2017 is a long way from 2030, but we are in fact in a sprint to our deadline for reaching the SDGs. Businesses that don’t embrace the goals face the increasingly real risk of getting left behind in a more globally conscious, markets-driven future. In a world that thrives on competition, perhaps it’s time we channel that drive and ambition into a collective race toward a better world for all.

Join us in this challenge. Tell us how you would change the world.