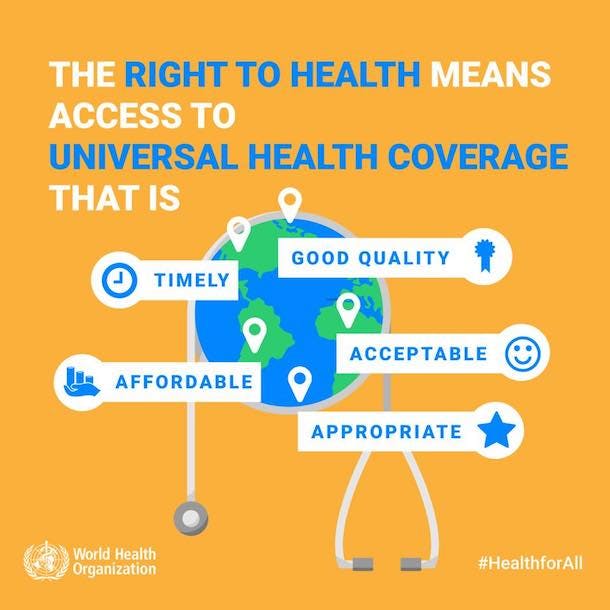 In the last decade, the world has come a long way on the journey to achieve universal health coverage (UHC). Who could have imagined then that the leaders at this week’s UHC forum in Tokyo would put the full weight of their political agendas behind extending affordable, quality health services to all? The announcement by Japanese Prime Minister Shinzo Abe that Japan will give $2.9 billion to shore up health care in countries that are implementing universal health coverage sparked excitement there.

It was fitting for Japan, a global UHC trailblazer, to highlight the need for accountability targets: extending basic health care coverage to an additional 1 billion people and reducing the number of people who fall into extreme poverty due to health care costs by 50 million by 2023. World Bank President Jim Kim applauded Japan’s decision to prioritize investments in that nation’s human capital. The rewards have certainly paid off, with Japan’s life expectancy now the highest in the world.

Whether or not ministers of finance and heads of state present in the grand hall this week will be moved to invest more in their people’s health remains to be seen. President Jim Kim’s announcement that World Bank nations will be rated on their human capital investment – which could eventually affect bond spreads and foreign investment – sent a ripple of nervous claps through the audience. It’s not meant to be punitive, he said; it’s the right thing to do.

The global health community must ask itself honestly how much does “being on the right side of history” inspire individuals, communities, and nations to care for those that need it most, those left behind, and those with no voice?

Time and again at this week’s forum, attendees were reminded of the Alma-Ata Declaration, which in 1978 declared primary health care as key to achieving health for all. It has been nearly 40 years, and we are still talking about achieving health for all. I listened with cautious optimism to the presidents of Sierra Leone and Myanmar, the former president of Chile, the Secretary-General of the United Nations, the Director-General of the World Health Organization, and heads of powerful global health agencies like UNICEF, Gavi, and the Global Fund to Fight AIDS, Tuberculosis and Malaria acknowledge the need for people to be at the center of this lofty UHC agenda.

There is a lot to be excited about regarding UHC’s progress. Next door to the grand main hall full of VIPs was a smaller room filled with innovators building real world solutions to some of the most pressing development challenges of our time – like the medical practitioner who was astonished at the lack of lifesaving equipment for struggling newborns and created a low-cost device to treat babies who otherwise would not have a chance at life. Or the drone developer and team of engineers that devised an ingestible camera to diagnose gastrointestinal conditions that plague so many in impoverished settings.

The intersection of how these innovations impact people’s lives is where the fight for UHC will be won. Inverting established development and financing paradigms means embracing risk and connecting newcomers with major organizations with deep roots and broad influence.

Though these innovators and entrepreneurs have business demands, as an insightful colleague at Safaricom said, “A business cannot succeed if society is failing.” The most recent Business and Sustainable Development Commission report shows that across the four major economic systems, including health and well-being, sustainable development could unlock $12 trillion worth of market opportunities.

This finding is not surprising: In places like South Asia, 80% of health care services are sought in the private sector. Missing from this week’s forum was a discussion of how to leverage the private sector to help provide affordable, quality primary health care services for all. Our global community of consumers, public, and private entities must work together to reimagine the health system of the future.

Disruptive innovation that supports a bold vision for primary health care service delivery – one that embraces quality, equity, and affordability – will move the world closer to UHC than our current financing, delivery, and political models will. As Mark Dybul, former Executive Director of the Global Fund and head of Georgetown University’s Center for Global Health and Quality said in his closing remarks at the forum, Unleashing Human Capital might just be what’s needed make UHC a reality.