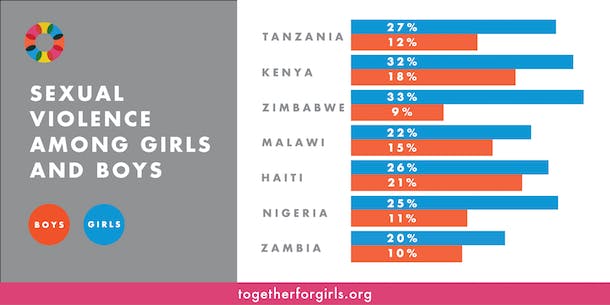 By Dr. Daniela Ligiero, Executive Director and Chief Executive Officer, Together for Girls

When it comes to sexual and gender-based violence, a lot has happened in recent months.

The groundswell of high-profile sexual assault and harassment cases in the U.S. has led to a global debate on the issue, and many once powerful men have seen their careers disintegrate in a matter of days. We also saw massive protests around the world after brutal rapes and subsequent weak government responses in Brazil, India, and South Africa. And global leaders are responding.

Recently, The United Nations and the European Union recently announced Spotlight, a special initiative focused on ending violence against girls and women. At Together for Girls, we’re hopeful that we have finally reached a turning point – where sexual violence in any form will no longer be accepted.

As we honor the 16 Days of Activism Against Gender-Based Violence, here are some truths about sexual violence:

1. Sexual violence happens in every country. About one in three (35%) women worldwide have experienced either physical and/or sexual violence in their lifetimes. Adolescent girls are particularly vulnerable: Data from the Violence Against Children Surveys, led by CDC as part of the Together for Girls partnership, show that more than one in four girls’ first sexual intercourse was forced or coerced. Although at lower rates, boys also report unacceptably high levels of sexual violence.

2. Sexual violence happens in every area of life.

At work: In the U.S., one in three women between the ages of 18 and 34 has been sexually harassed at work. Christine Lagarde and 17 other prominent French politicians recently exposed the rampant sexual harassment they experience at work.

At home: By far the most common perpetrators of sexual violence against girls are current or former husbands, partners, or boyfriends. Globally, one in nine girls is married before 15.

In school: An estimated 246 million girls and boys experience school-related violence. The extent and nature of this violence differs for girls and boys, with girls at greater risk of sexual violence, harassment, and exploitation. Twenty-three percent of female undergraduate university students reported having experienced sexual assault or sexual misconduct in a survey across 27 universities in the U.S.

3. Sexual violence is about power and control, and it is often gendered. It happens because perpetrators put their desires over the survivor’s agency to consent. Because of deep and pervasive gender inequality, most sexual violence is perpetrated by men against girls and women. However, men and boys can also be victims of sexual violence, and women can also perpetrate sexual violence. Power differentials between adults and children affect both boys and girls. Gender non-conforming individuals and LGBTQ+ persons are also at elevated risk for sexual violence

Create a culture that supports victims and survivors: In our global surveys, led by CDC as part of the Together for Girls partnership, we’ve found that approximately one in three girls and one in eight boys experience sexual violence before age 18, but about half never tell anyone. The main reasons for not talking to someone include fear of not being believed, fear of retaliation, and shame. We need to create societies where someone who has experienced sexual violence feels empowered to come forward, knowing they will be believed, protected, and not blamed.

Men, here’s what you can do: Men and boys have a critical role to play in ending sexual violence. Women alone cannot fundamentally transform a culture that condones and excuses behavior like sexual assault; that duty can and should fall to men. Here are five things men can do, including listening to women, talking to other boys and men, and learning and practicing consent.

Support those working to end sexual violence:  You can volunteer your time, donate money, and/or lobby legislators.

For too long, sexual violence has been an issue shrouded in silence, perpetuated by powerful men who count on the assent of those around them and the lack of responsiveness by the very institutions that should protect survivors. But there is strength in numbers, power in awareness, and change in action. We can harness this moment to create deep and lasting change for generations to come.