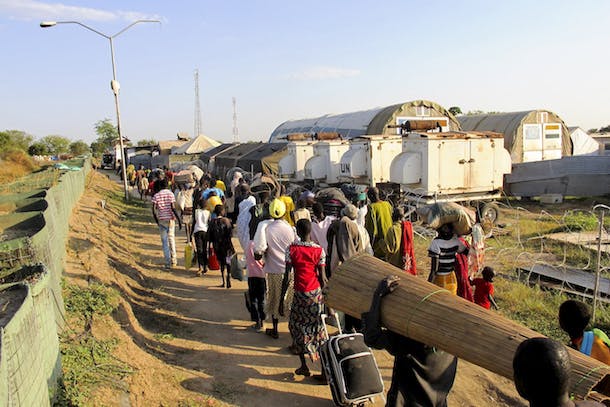 December 15 marks the grim three-year anniversary of the civil conflict in South Sudan, which has caused the displacement of 3 million people, led to the deaths of approximately 300,000 civilians, and featured ongoing sexual violence that terrorizes families and destroys communities.

The most recent violence is being carried out by soldiers in the town of Yei, an area of South Sudan previously untouched by the conflict. Ethnic rivalries and hateful propaganda have helped fuel the violence, causing more than 200,000 people to flee their homes.

Because of the violence in Yei, almost 2,000 people a day have been crossing the border to Bidi Bidi in northern Uganda. Since July, this small village now suddenly hosts one of largest refugee settlements in the world at almost 260,000. But suffering is not confined to Yei or the people who have made it to Uganda. The United Nations is currently reporting that 4.6 million South Sudanese are at risk of starving to death.

We are grateful for the Obama Administration and bipartisan Congressional support for the people of South Sudan, but as the UN reports on a “potential genocide” the United States cannot stand idly by.

We believe continued leadership and support is critical to pressuring the UN Security Council to adopt measures designed to reduce the violence, including an immediate arms embargo and targeted sanctions to stop the flow of heavy weaponry – including Mi-24 helicopters and L-39 jet fighters – that are being used to commit large-scale attacks against civilians. But the U.S. can do more by increasing the pressure on the leaders of South Sudan to move forward with the agreed upon Transitional Government of National Unity and allow the UN Peacekeeping mission in South Sudan, UNMISS, to carry out its mandate to protect civilians and report on human rights violations.

Lastly, the U.S. can place bilateral pressure, such as limiting foreign assistance, on troop contributing countries to UNMISS, holding them accountable to protect South Sudanese civilians.

Past atrocities have taught us that genocides don’t just happen; they are planned and implemented. With the U.S., the UN, and the international communities’ watchful eye and ongoing pressure, we must do more to change the trajectory and fate of millions of South Sudanese civilians.