I met Nyanwour during a visit earlier this year to the Kakuma refugee camp in northern Kenya. She was a recent arrival to the camp. Nyanwour fled the violence in South Sudan with her four children, who were between 5 and 8 years old, and walked three days to get to the safety of the Kakuma camp.

Her story was heartbreaking to hear, but what struck me most was her strength and resilience. In the face of great danger and difficulty, Nyanwour went to extraordinary lengths to keep her children safe.

Throughout the camp, I met refugees like Nyanwour whose courage and perseverance show the strength of the human spirit.

I also met committed and compassionate camp workers from the United Nations Refugee Agency, other UN agencies, and humanitarian aid groups who are helping vulnerable families in their greatest hour of need. 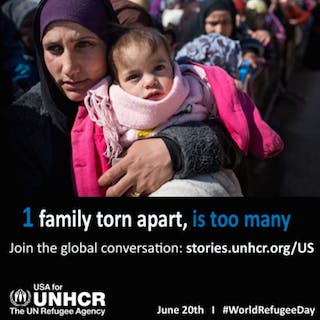 On World Refugee Day, and every day, let’s give them our support. Each of us can join the UN’s life-saving work to aid refugees and displaced people. We can raise funds, raise awareness, and raise our voices. Just as important, we can raise their voices and make sure the stories of refugees are not drowned out, but lifted up.

It’s easy to feel overwhelmed by the scale of today’s problems. But instead of feeling hopeless, let’s feel hopeful, inspired by the courage of Nyanwour and others to give their children a better life.

Each of us can make a difference. As UN Deputy Secretary-General Jan Eliasson likes to say, “Nobody can do everything, but everybody can do something.” Together, let’s do something big for families who have lost so much.