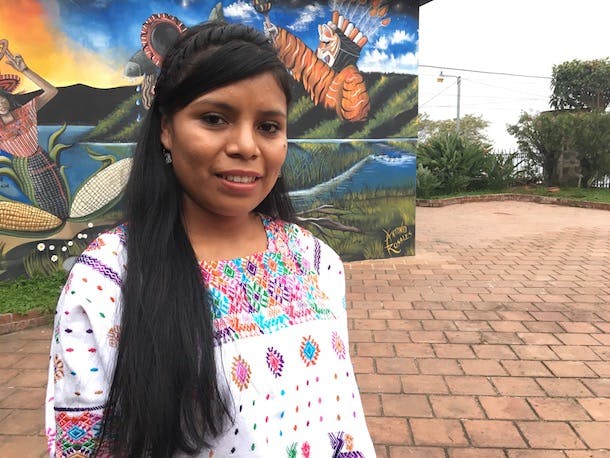 Last week, I was in Guatemala meeting with girls and women to learn about their sexual and reproductive health and rights and the incredible people who work to protect and support those rights. Just a few days later – more than 3,000 miles away from Guatemala in Washington, D.C. – the U.S. government eliminated its funding for the United Nations Population Fund (UNFPA), which supports programs to advance the health, rights, and well-being of girls and women in Guatemala and 150 other countries around the world.

Because the U.S. is one of the largest contributors to UNFPA, eliminating U.S. funds to the agency puts the health and rights of the world’s most vulnerable girls and women on the line. One of these women is Elvira Cuc Choc, a fierce 24-year-old who traveled more than 10 hours on five buses from the Western Highlands of Guatemala to Sololá to tell us about her work. She shared, for example, that girls in her community had never been told the names of their body parts and how they work or that another person doesn’t have the right to touch them without their consent.

Elvira is a youth mentor with Abriendo Oportunidades, or “Opening Opportunities,” a Population Council program funded by UNFPA – and, by extension, the U.S. government – that works to provide vulnerable Mayan girls in Central America, many of whom live in isolated rural areas, with the skills and support they need to improve their lives. Just $150 can support a girl’s access to essential health services and information for two years.

Abriendo Oportunidades began in 2004 in a few rural communities in Guatemala and has since expanded nationwide and to Belize and Mexico, offering social support networks, role models and mentors, life and leadership skills, and professional training and experience to Mayan girls ages 8-19. The success to date has been outstanding: Abriendo girl leaders have stayed in school longer, married later, had kids if and when they were ready, and have reported feeling more independent and comfortable expressing their opinions. This is significant in a country like Guatemala where most women have had a baby by age 20, and it’s common for girls as young as 14 to be pregnant.

Programs like Abriendo Oportunidades are a rarity even though they are quite literally shaping an entire generation. For the more than 14,000 girls and women who have been reached by the program, not only are they empowered about sexual and reproductive health and rights, they are also able to stay in school, expand their earning potential, and help build prosperous families and communities. The success of this program has been a direct result of the U.S. taxpayer dollars for UNFPA that have now been eliminated.

While the impact of these cuts is particularly strong in UNFPA’s Guatemala programs, the effect will be widespread: UNFPA is on the front lines in countries across the world providing critical services, such as voluntary family planning, midwife training, pre-natal care, and safe delivery services, and working to end child marriage and female genital mutilation. The agency is often the first – and in some cases the only – health provider in humanitarian crises, and last year used funding from the U.S. government to reach 9 million people in crisis situations with fundamental services like HIV/AIDS prevention, domestic violence counseling, pregnancy checkups, and safe childbirth.

So what about the millions of young women like Elvira who haven’t yet benefited from a program like this but could? Their health, rights, and dreams will have to wait until the U.S. Administration restores funding for UNFPA. Whether in the United States or Guatemala or any other country in the world, every girl and woman deserves to be in charge of her future. It’s a sad day when we make it harder for that to happen for millions of girls and women.

Now is the time for all of us who care about the rights of girls and women, and who care about a more equitable and prosperous world, to speak out against these cuts and in support of the work of UNFPA.

Learn more about the Universal Access Project and get involved at www.universalaccessproject.org.