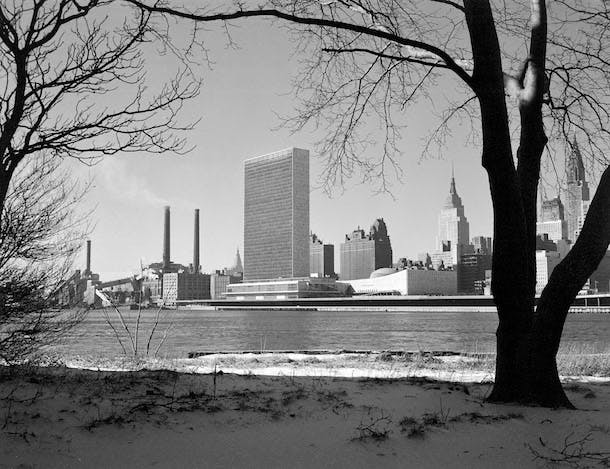 The United Nations Charter signed at San Francisco laid the groundwork for the UN as we know it. But the delegates also left many issues unresolved. One of the most important was the location of the new UN headquarters.

The UN first decided on a country before it started to narrow down to a city. One faction hoped to leave the headquarters of the international organization in Geneva, where the League of Nations had been based. Others thought that a new international organization needed a new location. The San Francisco delegates did not vote on the issue, but left it for a later meeting. The first UN General Assembly would be held in London in January 1946, leaving the organization time to decide.

Initially, everyone expected that a city would be chosen straight away after the Preparatory Commission had voted on the country.

But the choice turned out to be hard because there were a surprising number of options. Dozens of U.S. cities eagerly competed for the UN. In fact, the UN received invitations from around 40 locations ranging from Chicago to San Francisco to Boston. The decision on the city was postponed until early 1946 to give the UN time to investigate each location more thoroughly.

There was much to consider. Should the UN be placed on the East or the West Coast? Where would there be enough space? Sir Ramaswami Mudaliar from India also pleaded for the UN to consider the question of discrimination. Many U.S. cities were still racially segregated and the Indian delegation wanted to be sure that all representatives would have freedom of movement.

The French claimed that Boston was the frontrunner. Others favored San Francisco after the pleasant months that they had spent there negotiating the Charter. The final major contender was New York City.

In the end, it was New York that won. Among the main reasons was the generous provision of space in the heart of the city. Nelson Rockefeller arranged for the purchase of the land; Nelson Rockefeller’s father, John D. Rockefeller Jr., provided the funding for the purchase. The building was designed by an all-star international team of architects including Le Corbusier and Oscar Niemeyer. The cornerstone was laid in 1949 and the UN headquarters were finished in 1952.

The UN Charter had resolved many of the major issues at the heart of the new international organization. But the Charter was like the cornerstone to the UN headquarters. It was a beginning, not an end.