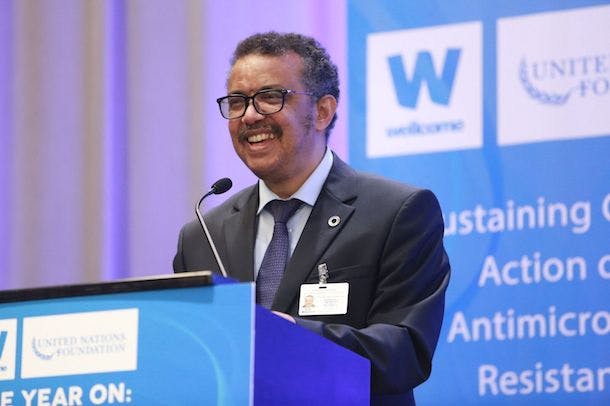 At the United Nations General Assembly in September 2016, all 193 UN Member States committed to supporting the efforts to curb the spread of infections resistant to antibiotics.

Antimicrobial resistance, or AMR, is perhaps one of the most complex and potentially devastating health and economic threats of our time, estimated to kill 10 million people per year and to cause an annual decline of 1.1%-3.8% in global Gross Domestic Product (GDP) by 2050 if not quickly addressed.

One outcome of the UN high-level meeting was a pledge for more coordinated action, and in March 2017, the UN established the Interagency Coordination Group (IACG) on AMR, a group of UN officials, government representatives, and public health experts tasked with defining a clear path forward.

Last week, leaders from the public health, animal, and environmental sectors gathered in New York for a UN General Assembly side event, One Year On: Progress, Challenges, Opportunities, and New Ways of Working to Tackle Antimicrobial Resistance (AMR). Over 150 stakeholders from governments, UN agencies, the private sector, civil society, research, and academia attended the event, which was organized by the UN Foundation and Wellcome Trust in partnership with the Governments of Mexico, South Africa, Thailand, the United Kingdom, and the IACG. The full audience and packed lineup demonstrated the growing recognition of the threat posed by increasing drug resistance and the continued commitment of all sectors to sustaining global action on AMR.

Moderated by Rajesh Mirchandani from the Center for Global Development, the event also featured the launch of a report by Wellcome Trust and the UN Foundation summarizing progress in the past year and noting areas of potential improvement. “While awareness of AMR is growing in many countries, much more work is needed to address this global health threat,” writes UN Foundation President and CEO Kathy Calvin in the report’s conclusion.

Putting Countries at the Center

“We are not where we should be,” noted Professor Dame Sally Davies, Chief Medical Officer of the United Kingdom, in her keynote remarks. While last year’s UN General Assembly brought AMR to the attention of heads of state and created momentum on the issue, there is risk it may stall. It’s easy to talk policy, she explained, but it is quite different to change behaviors and interactions on the ground. The inappropriate use of antibiotics is the greatest concern, and this is something that can be addressed. She applauded countries for their progress, but urged everyone to pick up the pace and “get on with it,” to tackle AMR together.

Political buy-in at the country level is key, echoed Dr. Tedros, Director-General of the World Health Organization (WHO), in his closing statement. “At last, AMR is starting to catch the attention of political leaders,” both at the 2016 UNGA and at this year’s G20 Summit, where AMR was included on the agenda for discussion among heads of state. The establishment of the Interagency Coordination Group and the UN’s Group of Friends on AMR this past July were additional steps in the right direction, he added.

The challenge is now to turn these political declarations into actions, said Dr. Aaron Motsoaledi, Minister of Health of South Africa. Many countries have already begun to do so; as of August 2017, 79 countries had developed National Action Plans with a further 49 in development, covering over 90% of the world’s population. But countries must take steps to implement these plans and to build their primary health care systems, with a focus on prevention, in order to combat the rise of superbugs.

The Importance of One Health

The challenge of AMR serves as an “opportunity to unite health, agriculture, and environmental concerns in collaborative global action,” explained Maria Helena Semedo, Deputy Director General of the Food and Agriculture Organization (FAO) in her keynote address. She gave the example of Cambodia, where strengthened collaboration between the health and agriculture ministries led to increased awareness of AMR and more prudent use of antimicrobials across sectors. FAO is working with WHO and OIE, the World Organization for Animal Health, to help tackle AMR using a One Health approach.

The concept of multi-sectoral action was echoed by speakers in the first panel, including Dr. Phusit Prakongsai from Thailand’s Ministry of Health, who shared the experience of Thailand in its development of a national action plan on AMR and the steps that were taken to curb the unnecessary use of antibiotics in animals. The audience also heard from Bård Skjelstad of SalMar, a Norwegian fishery that has helped to move Norway’s entire fish farming industry toward the use of vaccines as an alternative to antibiotics in aquaculture, thereby reducing the amounts of antimicrobials in the food chain.

Jean Halloran of Consumers Union spoke of the power of consumers to reduce the use of antibiotics, as patients can be empowered to question the prescription of antibiotics by their doctors, while consumers can be encouraged to demand antibiotic-free food. The latter has help to spur action by industry, including large food chains such as McDonalds, which has committed to phasing out priority antibiotics used for human medicine in its global chicken supply by 2019.

Though the cost of inaction would be great – a loss of over 5% of GDP for low-income countries, according to some estimates – certain targeted efforts can help to curb the spread of AMR, emphasized Tim Evans of the World Bank. A focus on preventative tactics such as immunization is one example. “If we can reach 100% coverage rates for the pneumococcal vaccine,” the demand for antibiotics would be greatly reduced, he explained.

The second panel spoke about the need for innovation in development, stewardship, and access of antimicrobials and other essential tools for battling AMR. While disease prevention through the use of vaccines is critical to preserve existing antimicrobials, patient-centered care must be the top priority, explained Dr. Julie Gerberding of Merck. Dr. Raj Taneja of the TB Alliance echoed this point, explaining the complexity of existing multi-drug tuberculosis treatment regimens coupled with the challenge of social stigma.

Ed Whiting of the Wellcome Trust highlighted the need to link access and stewardship together in the inception of new antimicrobial development, describing CARB-X, a drug development accelerator launched in July 2016 that has raised $65.6 million in funding for 18 antibiotic projects around the world. GARDP is another example of an R&D initiative to develop new antibiotic treatments and to promote their responsible use while ensuring equitable access for all in need.

Strong investment mechanisms are the bedrocks of drug development, commented Martha Gyansa-Lutterodt, Director of Pharmaceutical Services for Ghana and Co-Convener of the IACG. She described Ghana’s experience in developing its national action plan and the benefits of increased collaboration across sectors, as evidenced by their rollout of the malaria vaccine and their work to reduce the burden of rabies. The political declaration on AMR provides policy guidance while the IACG and the Tripartite (WHO, FAO, and OIE) will support implementation, she explained.

While acknowledging the difficulty in providing incentives to develop new drugs, as highlighted in WHO’s recent report showing a serious lack of new antibiotics in the clinical pipeline, Dr. Taneja described a recent study in South Africa that found a new treatment for multi drug-resistant tuberculosis to be effective in 45 patients. This story provides a glimmer of hope that, with multi-sector action and effective funding mechanisms, the world can start to turn the tide against AMR.

“We have reached a historic turning point, and we cannot let this moment pass,” Dr. Tedros stated in his closing remarks. Political leaders are beginning to understand that AMR is a matter of global health security and must be addressed with utmost urgency, and must focus now on increasing awareness and changing behaviors on the ground. He emphasized his commitment to this issue, both as WHO Director-General and as Co-Chair of the IACG along with UN Deputy Secretary-General Amina Mohammed.

Minister Motsoaledi looked towards the future, encouraging participants to leverage the upcoming WHO Ministerial Meeting on Tuberculosis in Moscow to harness action and energy in the lead-up to the 2018 High-Level Meeting on Tuberculosis, where AMR will be a key topic of discussion. He suggested incorporating several of the topics mentioned at the event into the High-Level Meeting’s outcome document, including the importance of prevention techniques such as immunization and hygiene, the need for innovative approaches to drug development, and the role of industry in reducing the use of antibiotics.

In closing the event, I encouraged attendees to get involved in the upcoming Call to Action conference in Berlin on October 12-13, where policymakers, industry leaders, civil society representatives, and public health experts will come together once again to identify solutions in the fight against AMR. This conference, co-hosted by the Governments of the UK and Thailand, the UN Foundation, and Wellcome Trust, will serve to accelerate tangible actions focused on the most critical gaps in tackling the development and spread of drug-resistant infections. For more information, email AMRCallToAction@wellcome.ac.uk.

TIME: It’s Been One Year Since the World Took on Superbugs. Here’s What Changed.

UN Dispatch: One year after promising to tackle antibiotic resistance, the UN assesses its progress

FAO: More investments and surveillance needed to curb misuse of antimicrobials in public health and agriculture