Right now, the international community is facing the largest refugee crisis since World War II. Approximately 60 million people around the world have been forced to flee their homes – from Syria to Afghanistan to South Sudan – to escape violence, conflict, persecution, and terrorism.

“Refugees should not be turned into scapegoats and must not become the secondary victims of these most tragic events,” Melissa Fleming, spokesperson for the United Nations Refugee Agency (UNHCR), said this week. 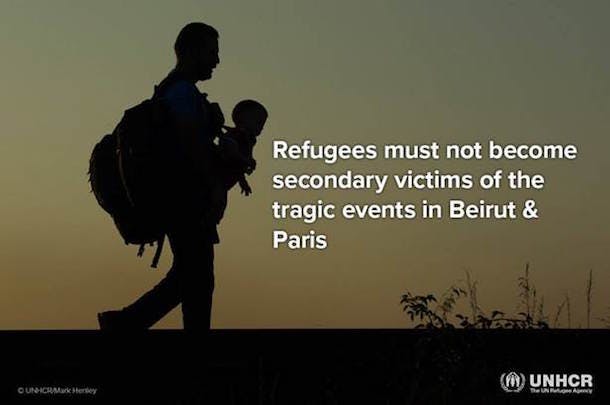 In Syria alone, more than 13 million people are in need of aid and more than 4 million people have fled the country, mostly to neighboring countries. Under a huge strain, many refugees are trying to make it to Europe and other locations, traveling thousands of kilometers in often dangerous conditions. UN Under-Secretary-General for Humanitarian Affairs and Emergency Relief Coordinator Stephen O’Brien recently told the Security Council: “Many Syrians – who have lost hope, and are fleeing unspeakable violence and whose resources are all but depleted – are willing to risk their life in perilous journeys across the Mediterranean: Some 400,000 people – that’s over 50 percent of the arrivals by sea in 2015 – are Syrian.”

These families have faced so much and need our support now as much as ever. As UN High Commissioner for Refugees António Guterres said this week: “It is not the refugee outflows that cause terrorism, it is terrorism, tyranny, and war that create refugees.”

In September, UN Secretary-General Ban Ki-moon made a powerful call to action, saying:

“I ask those standing in the way of the rights of refugees to stand in their shoes.

“People facing barrel bombs and brutality in their country will continue to seek life in another.

“People with few prospects at home will continue to seek opportunity elsewhere.

“This is natural. It is what any of us would do for ourselves and for our children.”

UN agencies are working tirelessly to provide vital aid – including shelter, food, and medicine – to people in their greatest moment of need, even as the work of these agencies is underfunded by the international community. As UNHCR has warned, “a bitter winter is fast approaching” for many refugee families who lack basic household winter items.

Now is the time to stand up and support refugees and the aid organizations working to help them. Learn more about UNHCR’s response and join the UN in helping people in need.