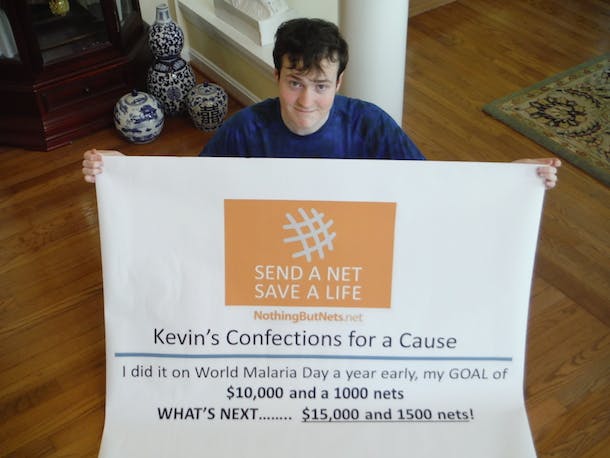 Kevin Strickland, a high school junior in Virginia, bakes cookies, cupcakes, and other treats for a cause: helping provide families with insecticide-treated nets that protect them from malaria.

Since 2012, he has been a supporter of the United Nations Foundation’s Nothing But Nets campaign, which raises awareness and funding to fight malaria, a leading cause of death among children in Africa.

As part of our ongoing “Supporter Spotlight” series, Strickland gave us his thoughts on why he got involved with Nothing But Nets and how people can make a difference.

Question:  What motivates you to work with Nothing But Nets?

Kevin Strickland: I was motivated to start my work on this campaign for two reasons: First, the low cost of purchasing the nets, and second, that children like myself were more vulnerable to malaria deaths. When researching a service learning project, I saw an ad on Hulu for Nothing But Nets, an organization that provides netting for Africa. I knew that the low cost of a net made it possible for me to fundraise for this cause. I saw that the lives of so many children were lost to malaria, never allowing them to become the people they were meant to be. I knew instantly I was meant to help however possible.

Q:  What is your biggest accomplishment with Nothing But Nets?

Q:  What have you learned from your involvement with Nothing But Nets?

KS: I have learned that with any world issue, the greater number of hands at work, the greater the accomplishment. Even though my work seems small, when joined by hundreds working toward the same goal, our outcome is grand. I have also learned that malaria is a disease that is 100% preventable through the use of one $10 net. It is potentially a huge outcome for very little input.

Q:  What is the best piece of advice you’ve ever been given?

KS: The best advice I was ever given is nothing is impossible if you persevere. The more time and energy we put toward any goal in life, the more attainable it becomes. Many of the things I have worked hardest for have become my greatest rewards.

Q: What advice would you give to someone who wants to make a difference in the world?

KS: I think the only way to make a significant contribution to the world is by feeling the solution deep in your heart. It has to come from a personal level, not by others telling you it’s a good project for you to accomplish. My parents allowed me the space to find what gently called me, then supported my work. I found a passion for helping others, and it no longer was work, but pure joy.

KS:  A world free of malaria, where every child is given the opportunity to find his or her own passion.

Editor’s Note: Want to learn more about Nothing But Nets? Visit NothingButNets.net, follow @nothingbutnets on Twitter, or visit Facebook.com/NothingButNets.