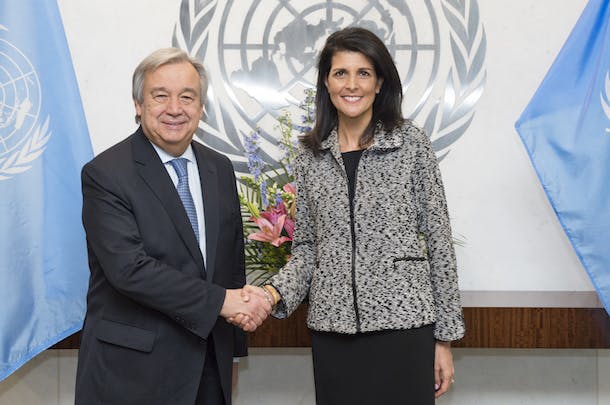 The Christmas Eve headline about American funding for the United Nations was a jolt: “U.S. to Make Cuts to UN Budget After Vote on Jerusalem.”  The caption implies that the U.S. was unilaterally slashing American dollars to the UN as a result of the recent UN General Assembly vote opposing U.S. policy on Jerusalem.

Fortunately, the headline was wrong, and the actual story is far more complex. Let me tell you why.

The two-year UN budget announced on December 24 is actually positive news for the U.S.-UN relationship. The cuts contained in the budget were negotiated with UN Member States and UN officials – negotiations that began months before the Jerusalem vote. The cuts were not unilaterally imposed by the U.S. or any other country, and are unrelated to Jerusalem.

This new budget reflects the give-and-take we have all faced managing our family’s budgets or those we might deal with at work.  It builds on the last biennial UN budget, which also reflected a reduction in spending.  Not to mention, there was also a 7.5% reduction to UN peacekeeping won earlier in 2017.

The new, slimmed-down budget demonstrates that the UN is capable of tightening its belt to reflect budget constraints in donor capitals, including Washington.

Ambassador Haley and team deserve credit for their willingness to actively engage in the rambunctious negotiations that are at the core of the UN’s budget deliberations in December and in winning alliances to get the cuts they were seeking.  Secretary-General Guterres also deserves enormous credit for proposing a reduced budget. And lastly, other UN Member States should be commended for successfully looking for savings that did not impact mission readiness.

But now that the United States has signed-off on the reduced UN biennial budget, it is imperative that we meet our financial obligations to the UN. Within the next few weeks, Congress will have a chance to do just that when it considers the FY 2018 State, Foreign Operations Appropriations bill, which funds the UN.  At the Better World Campaign, we will be focused intently on achieving that goal in the weeks ahead.