Stand with Girls and Women, UNiTE to End Violence

Stand with Girls and Women, UNiTE to End Violence 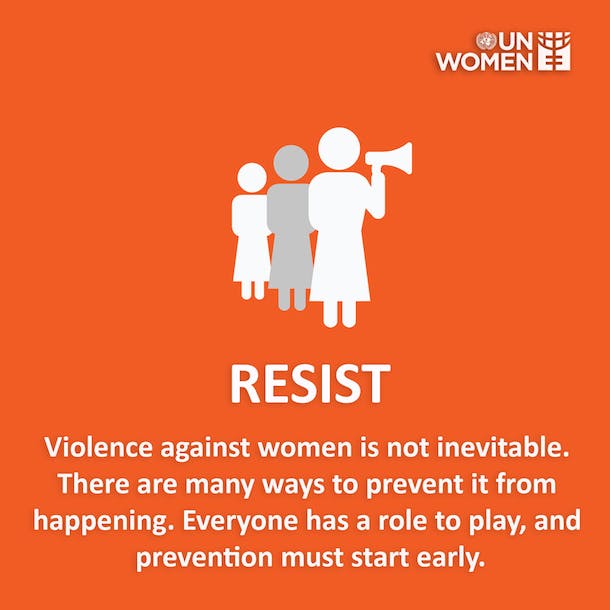 On Saturday, the International Day to End Violence Against Women, was marked by marches in Chile, Lebanon, Italy, Mozambique, Spain, Sweden, Turkey, and the United Kingdom. Landmarks, from the Christ the Redeemer statue in Brazil, to parliament buildings in Bangladesh, Liberia, and Morocco, to Jet d’Eau in Geneva and Table Mountain in Cape Town, glowed orange to mark the beginning of the annual 16 Days of Activism to end gender-based violence. Dutch government officials wore orange ties and scarves, and in France, President Emmanuel Macron announced an initiative to make it easier to report sexual assault claims to police.

As the 16 Days of Activism began, the Secretary-General and UN Women reminded the world that violence against girls and women remains one of the most pervasive and persistent human rights violations – one that undermines peace, progress, and prosperity – and exists in every country in the world.

The facts are profoundly disheartening.

UN Women estimates 35 percent of women worldwide have experienced either physical or sexual violence or both from an intimate partner or non-partner.

– Globally, 47% murders of women are committed by an intimate partner or family member, compared to less than six percent of murders of men.

– An estimated 250 million women and girls globally have been subject to female genital mutilation in 30 countries, and 750 million were married as children.

– While sex-selective abortions have been reduced in some countries, rates are higher than ever in India and increasing in other places, such as Armenia.

– A third of American women say they’ve been sexually harassed or abused in the workplace, according to one poll, while another finds that nearly half of currently employed women in the United States say that they have personally experienced an unwelcome sexual advance or verbal or physical harassment at work.

The social and economic costs are staggering.

Violence against girls and women is not only a glaring violation of human rights, it also brings substantial social and economic costs, affecting girls’ and women’s educational, economic, and civic participation, while straining justice systems and social and health services.

– According to UN Women, annual costs of intimate partner violence were calculated at $5.8 billion in the United States, $1.16 billion in Canada, $11.38 billion per year in Australia, and $32.9 billion in England and Wales.

– Research also demonstrates that women who are exposed to intimate partner violence earn 60% less than women who do not experience violence.

Medical research from developed countries has even established a link between exposure to violence as a child and health problems as an adult: American children from a violent home are two to three times more likely to suffer from cancer, a stroke, or heart disease, and five to 10 times more likely to abuse alcohol.

But you can do something about it.

First, consider supporting the UN Trust Fund to End Violence against Women. In the past 20 years, the UN Trust Fund has awarded $129 million to 463 initiatives across 139 countries and territories, and works with non-governmental organizations, governments, and UN country teams to prevent violence against women and girls, improve access to services, and strengthen implementation of laws, policies, and action plans on violence against women and girls. With every single dollar, UN Women works to protect the right of every girl and woman to live free of violence.

Second, learn more about the Spotlight Initiative, a large-scale effort launched by the UN and the European Union to eliminate all forms of violence against women by strengthening action on laws and policies, prevention, and services for survivors. Named for the focused attention the effort brings to the issue of violence, the Spotlight Initiative also reminds us that violence often takes place in the dark, is denied or rendered invisible. But, as recent headlines attest, violence cannot survive in the light. The Spotlight Initiative will focus on domestic and family violence, sexual and gender-based violence and harmful practices, femicide, trafficking in human beings, and sexual and economic exploitation.

Finally, listen to and support girls and women. As Melinda Gates said recently in TIME, “The world is finally listening. Me too. Me too. Me too.” Gates added, “Discrimination, harassment and rape have never been acceptable. They’ve just been accepted” and a cost of being female.

Violence against girls and women is not inevitable or unstoppable. Indeed, we can and we must do something about it. In communities and on campuses in every part of the world, efforts are in progress to collect better data, to support survivors, to empower women to protect themselves, to change policies, to help women escape domestic abuse, to prevent violence by engaging boys and men, to disrupt human trafficking networks, to end early and forced child marriage and female genital mutilation, to address gender-based violence in humanitarian crises, to unify stakeholders and improve public knowledge, and to talk to boys about healthy relationships, to stop violence before it starts.

In our own effort to listen, the UN Foundation will feature in the next two weeks a diverse chorus of voices against violence. We invite you to check back at the UN Foundation blog between now and Human Rights Day, December 10, to learn more about the dimensions of this serious and stubborn challenge to gender equality and sustainable development, to read about unique and emerging approaches to end it, and to UNiTE to end violence against girls and women.

To mark the 16 Days of Activism to end gender-based violence, the UN Foundation will feature a diverse chorus of voices against violence between now and Human Rights Day, December 10.  Check the UN Foundation blog to learn more about the dimensions of this challenge, to read about unique and emerging approaches to end it, and to UNiTE to end violence against girls and women. Support the UN Trust Fund to End Violence against Women here.