Some Stories Weren’t Made for Children: The Real-life Unfairy Tales of Syrian Children Refugees

Some Stories Weren’t Made for Children: The Real-life Unfairy Tales of Syrian Children Refugees

Today I am on my way to New York for a special kind of convening, the convening has moms in its title, Moms+SocialGood, but it is really about something we all can relate to: childhood. I will be presenting a powerful video series that was brought to my attention a few weeks ago about Syrian refugee children, something I can’t get out of my head.

While meeting with colleagues from UNICEF, we talked about the ongoing situation with refugees and how difficult it can be to tell this story.

This is our tasks as communicators, and it is never an easy one, but now it is imperative that we get it right because there is just a lot of misinformation out there. There is a real misperception about the true scope and size of the refugee situation that the world is facing right now.

In a recent survey, the British, French, and American publics underestimated the number of Syrian refugees by more than 4 million.

So how do you help make this story something that is both factual and urgent for people? Well, for centuries people have been doing it through fairy tales.

But how can a story of terror or fear be put into a fairy tale? Is that even fair? Some friends at UNICEF partnered with ad agency 180LA and animation houses Consulado, House of Colors, Bubba’s Chop Shop and Gilles+Cecilie Studio, and Media Monks to help bring these stories to life.

These are the Unfairy Tales. They are animated, but they are based on real-life. Take a moment now to find out what happened.

Here is the story of “Ivine and the Pillow,” which animates the true story of 14-year-old Ivine
and her pillow, Pillow. After a dangerous escape from Syria, Ivine settles at a refugee camp in Germany only to face new set of challenges. Follow her story in what is a fairy tale that should never happen.

There is also the story of “ Malak and the Boat”, which tells of 7-year-old Syrian refugee Malak and her dangerous voyage in a leaky boat. Both of these stories are Unfairy Tales that no child should ever imagine, let alone endure. 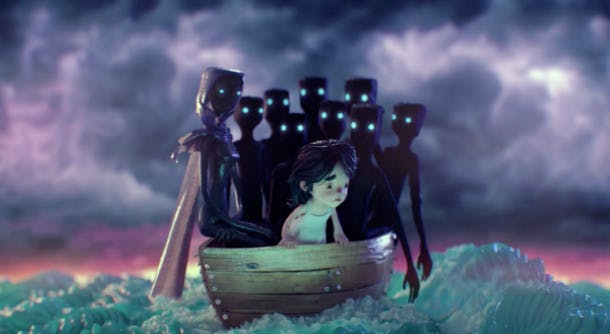 Thank you to UNICEF for bringing these children’s real stories to light. They are images that are hard to get out of your head and they are uncomfortable, but this is a good thing. It reminds us that there are people at the UN and partner organizations who are not only responding to the crisis, but helping get to the root causes of the crisis. It reminds us that we all have a role to play in dispelling the misinformation and using acts of humanity to help
these children in need.

It will be an honor to amplify these children’s voices and these partners today in New York. I hope that you will take the time to share these powerful stories using the hashtag #actofhumanity with your family as appropriate and with your friends and networks as much as you can.

We all know what it is like to be a child, but we need to get better at communicating the realities of what refugee children face.