Solidarity and Solutions for Girls and Women Everywhere

Solidarity and Solutions for Girls and Women Everywhere

By Michelle Milford Morse on October 3, 2017 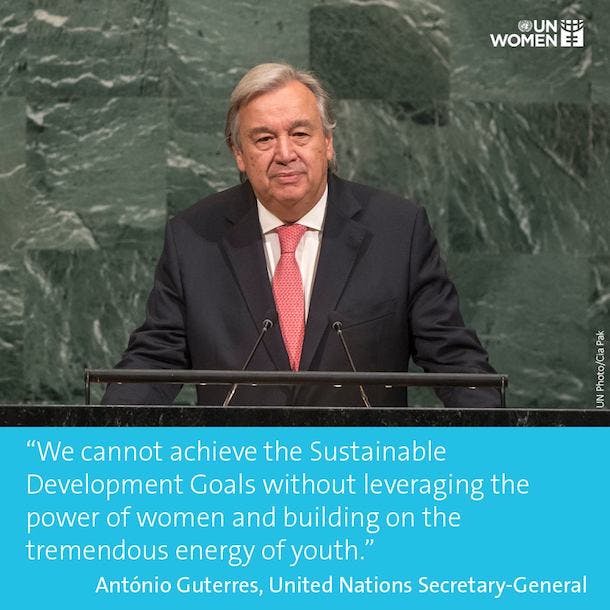 What do the United Nations Secretary-General, the First Lady of Namibia, the youngest Nobel Prize winner, the Prime Minister of Japan, an iconic philanthropist, and a NASA astronaut all have in common?

At the 72nd United Nations General Assembly (UNGA) – across New York City and in meeting rooms, on campuses, and in hallways at the UN – they each championed their commitment to gender equality and girls and women’s rights and empowerment.

It is tempting to take for granted that many global leaders regularly put equality and empowerment at the center of our hopes for more peaceful, prosperous, and just societies, and equally rational to lament the real and recent wave of regression that has sprung from these turbulent times. Still, this global solidarity movement for equality has gained considerable traction and notable champions in the past decade, bolstered by growing evidence that supporting the rights and the potential of half the human population is not only right, it’s smart.

Indeed, things were different when Ted Turner made his historic gift to UN causes 20 years ago, including on gender equality. While the UN had long championed dignity and equal rights for women, in accordance with the Charter of the United Nations, in Beijing at the Fourth World Conference on Women, and every year at the Commission on the Status of Women, these concepts were not yet seen as essential to wise development policy or advancing peace and security.

Now, Ted has mighty and welcome company. Here are just a few highlights from a week for girls and women.

Sam Mostyn, Fiona Dawson, Mary-Ann Etiebet, Mary Ellen Iskenderian, Amy Jadesimi, and UN Foundation President and CEO Kathy Calvin inspired a huge crowd of mostly students by sharing anecdotes about their paths to leadership – reminding them to stop confusing being liked for being respected, to stop striving for perfection, and to always persevere. The Commission also issued a discussion paper to shine a spotlight on the ways women are leading the world to meet the SDGs and how to further mobilize more women to lead the world to 2030. Read more at #womenrising2030.

UN Women celebrated its solidarity movement for gender equality – HeForShe – in a gathering of 30 IMPACT Champions, including 10 Heads of State, 10 global CEOs and 10 University Presidents, as part of its IMPACT 10x10x10 initiative to advance gender equality. UN Women Executive Director Phumzile Mlambo-Ngcuka opened the event by saying, “We want to make sure that all the male feminists in the room feel like they can come out of the closet.” HeForShe Champions, including Sauli Niinisto, President of Finland; Shinzo Abe, Prime Minister of Japan; H.E. Arthur Peter Mutharika, President of Malawi; Klaus Werner Iohannis, President of Romania; Paul Kagame, President of Rwanda; and an impressive collection of business and academic leaders then described approaches to changing discriminatory policies, the benefits of gender parity in business, and promoting gender equality in education and on campus, all featured in the new IMPACT 10x10x10 Gender Parity Report. Read more at #HeForShe.

During the phenomenal Goalkeepers event, Melinda Gates illuminated the power of women’s movements to knock down barriers faced by girls and women, saying, “Women’s movements are often unseen, uncelebrated, and unfunded. But they’ve changed the course of history anyway – and they will again.”The Bill and Melinda Gates Foundation made a $20 million commitment to help fund local organizations, platforms, and campaigns to increase gender equality, an investment decision grounded in the belief that women in their communities who are closest to the challenges they endure are also the most likely to know the right solutions, and the most willing to put everything on the line to fight for them. Read more at #HowEqualityHappens.

UNICEF estimates that more than 700 million girls and women alive today were married as children, and more than one in three, or some 250 million, were married before the age of 15. Girls who marry young are less likely to complete school, more likely to be physically abused, and more likely to become HIV positive. They are subject to early pregnancy, social isolation, and reduced life choices. Early and forced child marriage is a substantial human rights violation and a significant barrier to sustainable development.

Indeed, new research finds that ending child marriage could save the global economy trillions of dollars between now and 2030. At a critical discussion on the topic, Accelerating Efforts to Eliminate Child Marriage in Africa by 2030, African leaders from Malawi, Uganda, and Zambia committed to end child marriage. President Edgar Lungu Chagwa of the Republic of Zambia said that, “If current trends continue, the total number of women alive today that were married in childhood will grow from more than 700 million to almost 1 billion women and girls by 2030.” President Arthur Peter Mutharika of the Republic of Malawi said girls should be able to “choose and direct their own futures,” and called for strengthening the systems that deliver services to adolescent girls, adding that, “We cannot harvest the best potential unless we stop early marriage.” Global advocates, including HRH Princess Mabel van Oranje-Nassau and Malala Yousafzai, also urged leaders to let girls be girls and not brides. Read more at #endchildmarriage.

Because adolescent girls and young women continue to be disproportionately affected by the HIV epidemic, especially in sub-Saharan Africa, the Global Fund launched the HER Campaign (HIV Epidemic Response) at UNGA with the help of the Organization of African First Ladies Against HIV/AIDS. Nearly 7,500 young women and girls will be infected with HIV this week. Girls account for more than 80% of all new infections among adolescents and are up to eight times more likely to be living with HIV than their male peers. The First Lady of the Democratic Republic of Namibia, Monica Geingos, spoke of the harmful gender norms, violence, inequality, and lack of negotiating power and education that can undermine girls’ ability to prevent HIV infection. Dr. Marijke Wijnroks, interim executive director of the Global Fund, reminded the audience that while we have made great progress since the height of the HIV epidemic – the number of HIV-related deaths has been cut nearly in half – HIV is the leading cause of death of women of reproductive age in low- and middle-income countries, particularly in Africa. The HER Campaign will mobilize public and private partners and address the urgent need to expand prevention programs that prioritize the needs of adolescent girls and young women, with an aim to reduce the number of new HIV infections among adolescent girls and young women by 58% in 13 African countries in the next five years.

Putting an End to Violence Against Women

One in three women will face violence in their lifetime. Three out of four women in professional jobs have been victims of sexual harassment, including online. Approximately 70% of human trafficking victims globally are girls and women, and 49 countries still have no laws protecting women from domestic violence. Last week at the launch of the Spotlight Initiative to Eliminate Violence Against Women and Girls, Federica Mogherini, High Representative of the EU for Foreign Affairs and Security Policy, said, “This is not a battle for women. It is a battle of the entire society.” The Spotlight Initiative, a multiyear partnership of the European Union and the UN, named for the focused attention it will bring to the issue, will work to combat trafficking, sexual exploitation, labor exploitation, domestic and family violence, sexual and gender-based violence, and femicide. The EU has made an initial investment of EUR 500 million. At the event Secretary-General António Guterres said that, “Violence against women and girls continues to blight lives and curtail opportunities for millions,” and requires, “necessary political commitment and dedicated resources.” The Spotlight Initiative is therefore unprecedented in scale, scope, focus, and ambition, and a crucial contribution to achieving the SDGs. Read more at #SpotlightEndViolence.

At the Concordia Annual Summit, RISE, a civil rights nonprofit that is working to ensure basic protections against sexual assault and access to justice for everyone, convened a discussion called Breaking the Silence: Global Leaders Ending Sexual Violence. Amanda Nguyen, CEO and founder of Rise, shared her story and moderated a discussion that included Olusegun Obasanjo, a former president of Nigeria, and Viktor Yushchenko, former president of Ukraine, that urged compassion for survivors and condemned the use of sexual violence in conflict. Joanna Roper, Special Envoy for Gender Equality for the UK, previewed her government’s new Principles for Global Action on Tackling the Stigma of Sexual Violence in Conflict, and said, “Eliminating stigma gives survivors a voice.” Given that sexual violence is pervasive and a gross violation of the fundamental rights of women, men, and children in every country, RISE is launching an effort to see a UN resolution adopted that will align all UN member states in a newfound commitment for survivors’ rights.

Pregnancy doesn’t wait for a crisis to end. As UN Population Fund (UNFPA) Goodwill Ambassador Ashley Judd stated, “No woman should die giving life.” Yet more than half of maternal deaths worldwide occur in countries affected by humanitarian crisis. As we face the largest humanitarian crisis since World War II, the specific and essential needs of girls and women amid conflict and natural disaster must be prioritized, including the fundamental human right to a safe birth. During an UNFPA event, Dr. Natalia Kanem, Executive Director of UNFPA, highlighted the Safe Birth Even Here campaign, and presented with colleagues a compelling case for investing in maternal health in humanitarian settings – bringing in voices from the field who are working for women, girls, and young people in Pakistan, Syria, and Mexico. “The only acceptable number when it comes to maternal deaths is zero,” Dr. Kanem emphasized, recommitting to the agency’s mission to ensure safety in giving birth everywhere, in all circumstances. Dan Baker, UNFPA’s Regional Humanitarian Coordinator for Syria, agreed and outlined a ray of hope, “I’m here to tell you that that number is possible,” adding that, in the end, it’s simple, “If services are there, women will live.

Providing care to new and expectant mothers in the midst of crisis was a theme that resonated across the New York City during UNGA. TIME Magazine and Merck for Mothers hosted an event, How Can We Support Maternal Health During the Refugee Crisis?, at which Her Excellency Marie-Louise Coleiro Preca, President of Malta, emphasized the need for governments and civil society to realize that “maternal health is not a woman’s issue, it’s a human rights issue,” and urged global leaders to make sure maternal health is “part and parcel” to any migration action plan. Lynsey Addario, the photojournalist behind TIME’s “Finding Home” series that follows refugee mothers as they look for a safe place to give birth, underscored the role of media in bringing to life the stories of refugees. Of her experience telling these stories, Lynsey said, she learned, “Women are resilient against all odds.”