She Decides. The World Can Help.

She Decides. The World Can Help. 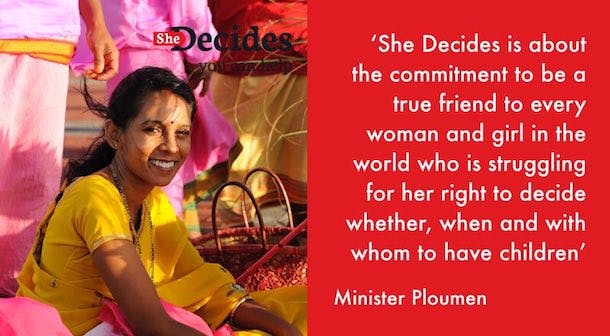 The Minister of Public Health for Chad, Ngarmbatina Odkimbeye Soukate, is the mother of four girls. This morning in Brussels, in a gathering of more than 45 government representatives from all continents and 400 parliamentarians and civil society participants, Minister Soukate declared, “If the world wants to advance, women have to decide.”

Her passionate sentiment was the theme of She Decides, an international conference devoted to mobilizing political, financial, and practical support for global sexual and reproductive health and rights. Speakers from Ethiopia, Pakistan, Colombia, and Mali reaffirmed that women’s rights are human rights, explaining that access to comprehensive information and services and upholding the rights of girls and women is necessary to achieve global gender equality – and global gender equality is required to reduce poverty and ensure global progress leaves no one behind.

Today’s conference raised €181 million – or nearly $200 million – for She Decides, with significant contributions from countries, including Belgium, Canada, Denmark, Luxembourg, the Netherlands, Norway, Sweden, and the United Kingdom, and private funders, such as the Children’s Investment Fund Foundation and the Bill & Melinda Gates Foundation. An anonymous American donor contributed $50 million dollars to the effort.

The She Decides movement was inspired by the reality that too many women lack rights-based sexual and reproductive health services, including an estimated 225 million women who have an unmet need for voluntary family planning supplies – a circumstance now exacerbated by the reinstatement of the Mexico City Policy, otherwise known as the Global Gag Rule. On January 23, 2017, the current U.S. Administration instated a new and more harmful version of the Global Gag Rule. As United Nations Foundation President and CEO Kathy Calvin explained, the policy “jeopardizes the health and well-being of the world’s most vulnerable girls and women,” and threatens efforts to fight HIV/AIDS, malaria, tuberculosis, Zika, and even cancer. You can read more about the Global Gag Rule here.

The UN Foundation committed to four actions to advance the goals of She Decides.

We are holding the U.S. Administration to account on the harm the Global Gag Rule will cause for the poorest girls and women. Further, we will continue to work with Congressional champions to increase support for the Global HER Act, a bipartisan and bicameral effort to permanently repeal the Global Gag Rule. Finally, we will continue to advocate for U.S. bilateral funding for voluntary family planning, and U.S. support for UNFPA, the UN Population Fund.

The U.S. media can play a crucial role in ensuring Americans understand the meaning and impact of the Global Gag Rule. For example, it is important to clarify that since current U.S. law already prohibits the use of U.S. funds to pay for abortion services as a method of family planning, the real consequence of the Global Gage Rule is that it eliminates a vast range of basic health care for marginalized girls and women. To improve understanding of the policy and its harmful effects, the Foundation’s Universal Access Project (UAP) will continue to work with its press fellows to increase and improve U.S. media coverage about international reproductive health and rights. To date, UAP has engaged 40 journalists in seven countries to illuminate the issues of reproductive health and rights. Its cadre of press fellows has published more than 75 articles on the topic in top-tier American outlets. Future press fellowship trips will focus on what the elimination of U.S. funds means for girls and women in the world’s poorest countries. UAP will also create a reporter’s guide to equip journalists with the language, story ideas, and background knowledge they need to report on sexual and reproductive health globally

In partnership with Merck for Mothers and UNFPA, UAP is beginning the second phase of its initiative to increase private sector support for workplace women’s health programs, with a focus on family planning. An estimated 1 billion women will enter the workforce in the next two decades, offering a pivotal opportunity to provide essential reproductive health services and information through workplace programs, enabling women to make the choices that work best for them. We will continue this work with the private sector to move workplace women’s health programs from marginal to mainstream.

Finally, the UN Foundation is proud to be the institutional home of FP2020, an essential platform born at the 2012 London Summit on Family Planning and dedicated to expanding access to voluntary, rights-based family planning programs to enable an additional 120 million women and girls in the world’s 69 poorest countries to use modern contraception by the year 2020. We reached a new milestone last July: For the first time in history, the number of women and girls using a modern method of contraception topped 300 million. But our goals are more ambitious, and there is more work to do. FP2020’s strategy is focused on accelerating progress to drive necessary coordination at the country level. The UN Foundation is honored to stand with FP2020 as it forges ahead, and the Foundation will lead an effort to mobilize private sector engagement in advance of the family planning summit to be hosted by the United Kingdom, UNFPA, and the Bill & Melinda Gates Foundation in July 2017 in London.

Minister Lilianne Ploumen of the Netherlands, who launched She Decides in January, said today that she received postcards with supportive messages “from Alaska to Virginia,” adding that the movement is “about the commitment to be a true friend to every woman and girl who is struggling for her right to decide whether, when, and with whom to have children.”

When it comes to her safety, her dignity, and her future, it is critical that She Decides.