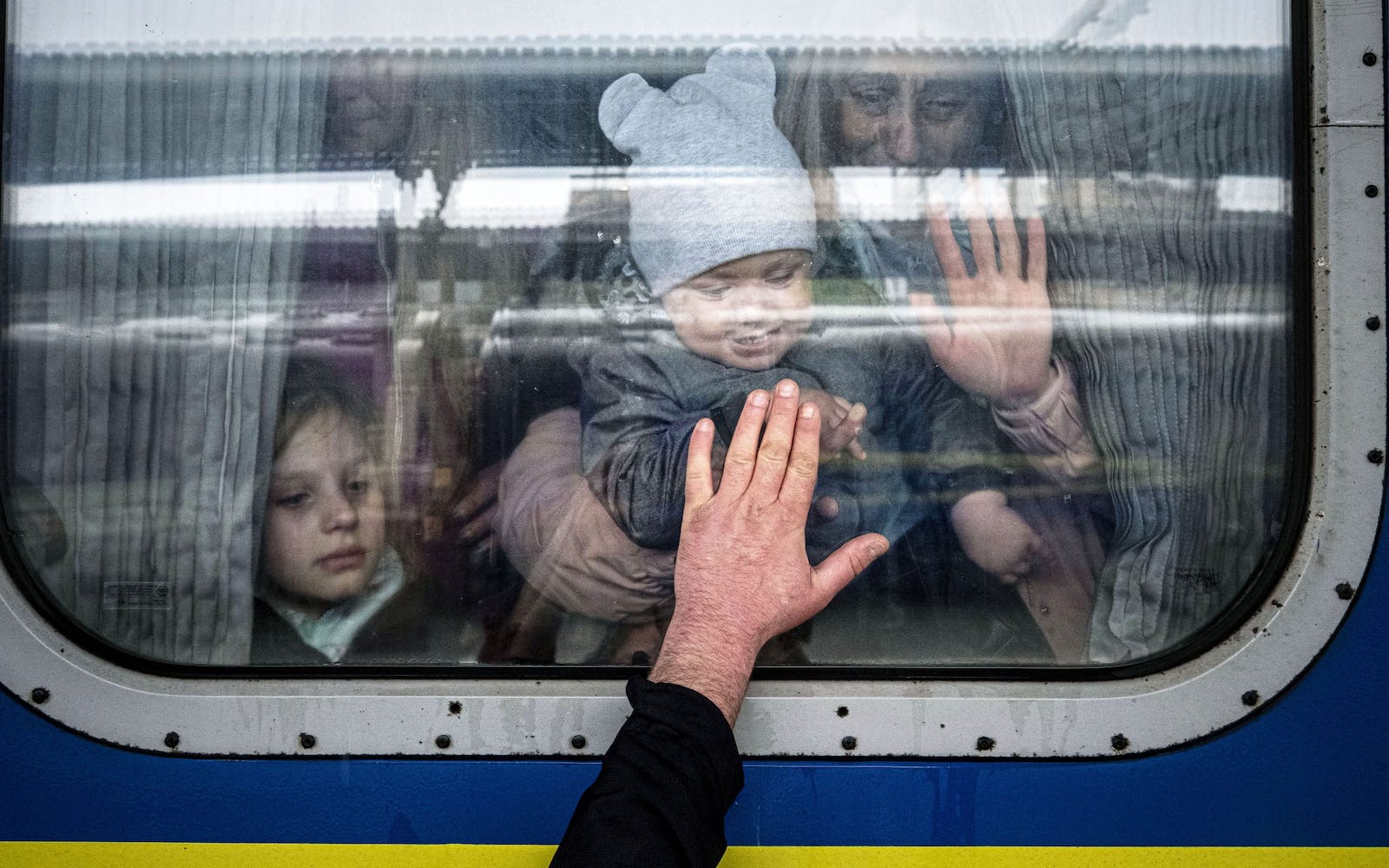 On April 20, 2022, in Kharkiv, Ukraine, a man places his hand to the window of a train car as he says goodbye to his wife and children before they depart on a special evacuation train. Photo: Ashley Gilbertson VII / UNICEF

Imagine: You and your family are no longer safe in your home. Circumstances beyond your control have left you with no other option than to flee. Leaving behind everything you know — from your country and community to your home, livelihood, extended family, and friends — you embark on an uncertain and dangerous journey to seek safety in a foreign land.

That is the reality for the more than 26 million people around the world living as refugees. Displaced from their homes by myriad factors, including conflict, insecurity, human rights abuses, persecution, natural disasters, and other climate impacts like drought, refugees travel hundreds if not thousands of miles in search of safety and basic means of survival.

Take the mother and child saying goodbye to their partner and father at the Ukrainian border, or the Afghan woman risking her life to escape poverty and violence, or the family walking for days to find water and food in the drought-stricken Horn of Africa — refugees put everything on the line in the hope of securing a safer, better future for themselves and their families.

While safety is something that is easily taken for granted, for these individuals who are risking everything, it is the only thing that matters.

With displacement at an all-time high according to UNHCR, the UN Refugee Agency, the challenges refugees experience and their fundamental right to seek safety are in the spotlight.

Everyone has the right to seek safety. Anywhere, anytime.

No one wants or expects to become a refugee, and yet, anyone can be displaced at any time, anywhere in the world. The numbers speak for themselves: 2020 had the highest number of active conflicts since 1945. And the latest data from UNHCR confirms that more than 100 million people are currently displaced — the highest number ever recorded. Every single person seeking safety has the right to protection. In fact, it’s enshrined in the Universal Declaration of Human Rights. With record levels of displacement, the need to actively assert and defend this fundamental right to safety has taken on a renewed sense of urgency. 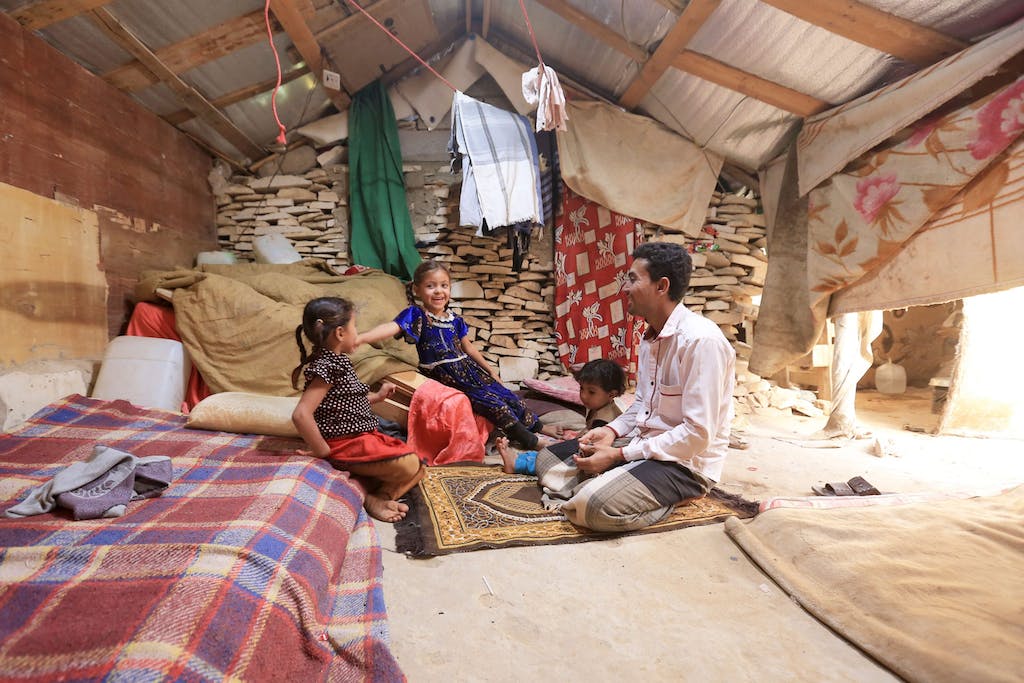 Waleed Al- Ahdal lives in Aljufainah IDPs camp in Yemen. He is living in a tent with his wife and three children after living in a house in Alhodeidah governorate. On the third day of Ramadan, Waleed and his family are trying to live the rituals of the holy month. Photo: Oais Al-hamdani / UNICEF

Discrimination should not prevent anyone from seeking safety.

From harmful stereotypes often perpetuated in the media to racism in host communities, the unjust and dangerous conditions refugees experience can persist long after their arduous journeys end. The refugee crisis sparked by the war in Ukraine was one of the most recent examples of the glaring discrimination that brown and Black refugees face compared with their white counterparts. Filippo Grandi, the High Commissioner for Refugees, was clear in a statement he issued earlier this year: “… we need to ensure that global responsibility sharing is strengthened for all refugees, no matter where they come from.” No one should ever be denied safety because of their race, religion, gender, or their country of birth.

Before refugees leave their homes, many have already experienced abuse — whether at the hands of governments, warring parties, or inhospitable living conditions. During their journeys to safety, they are often confronted with maltreatment by traffickers, harsh detention conditions, or unwelcoming host communities. One particularly harrowing UN report paints a devastating picture of the challenges that migrants and refugees face on the way from East and West Africa to Libya: “being burnt with hot oil, melted plastic, or heated metal objects, being electrocuted, tied in stress positions, and experiencing and witnessing repeated sexual violence, often in the context of ransom demands.” These conditions are entirely unacceptable, full stop. Every human being has the right to be treated humanely, and with dignity. 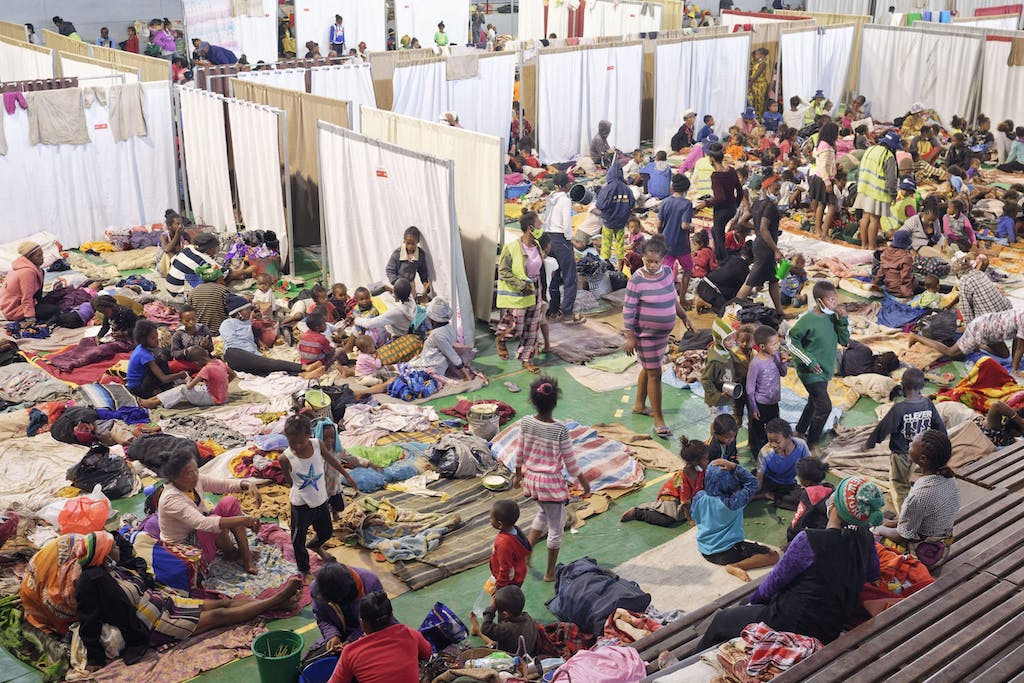 A view of the interior of a gymnasium in Ankorondrano, Antananarivo, Analamanga Region, Madagascar. On the night of January 17 to 18, 2022, a torrential rain fell on Antananarivo, causing a sharp rise in water levels in the lower districts of the capital and house collapses. Photo: Rindra Ramasomanana / UNICEF

Those most vulnerable to climate-fueled disasters must be protected.

Refugees flee their homes not only to escape war. UNHCR reports that in the past decade, weather-related events have led to twice as much displacement as conflict. From floods to droughts, vulnerable populations experience the most extreme climate impacts, and 90% of refugees come from countries that are least prepared to deal with the fallout. At the same time, 85% of the world’s refugees seek safety in developing countries, which are disproportionately affected by climate change. This places additional stress on water, cropland, and other already scarce resources. Climate change is a global challenge that will affect everyone, everywhere — but we know that those who have contributed least will suffer the most. High-emitting countries need to step up to help ensure that climate-vulnerable developing countries have the resources to adapt to a warming climate.

A lack of safety harms both physical and mental health.

As COVID-19 spreads around the world, it has a disproportionate impact on refugees. Many lack reliable access to sanitation facilities or water, and physical distancing can be nearly impossible in cramped temporary settlements. At the same time, the entire experience of displacement means that refugees are more prone to mental health disorders including anxiety, depression, and post-traumatic stress. In one World Health Organization survey, several respondents expressed how the sheer uncertainty and instability that comes with not knowing what the future holds took a toll on their mental health. Accessing safety can help improve refugees’ health and well-being, and help them start to rebuild their lives.

Every day, refugees defy all odds to make arduous journeys with one goal in mind: getting to safety. The pursuit of safety should be a humane, dignified experience available to all. Join us in standing with refugees, and reassert safety as a fundamental human right.