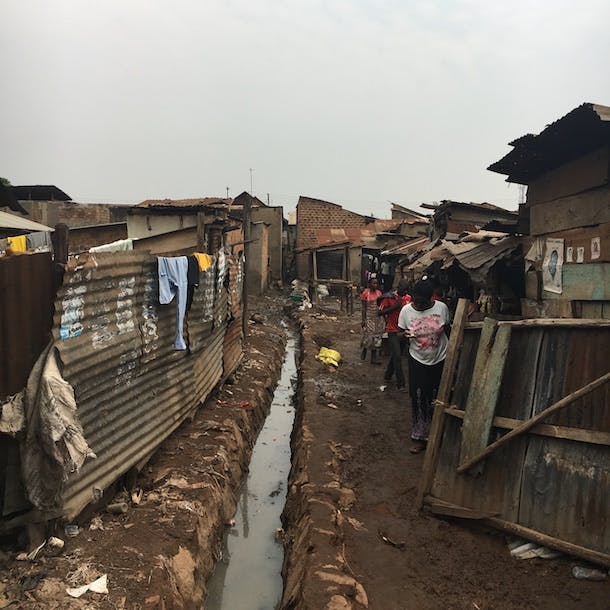 When I visited Uganda last year, I met a woman named Sarah*. As she relayed, from the moment she was born, Sarah’s life was shaped by inequality: She was born into poverty, with no support from her family, no access to education or health care, and no job opportunities in her rural town. As a young girl of 12, she moved to the city on her own looking for economic opportunity, where she was raped by an older man and became pregnant. Through her sheer will Sarah survived: She gave birth unattended and, with no other opportunities to provide for her child, ultimately engaged in sex work so that she and her baby daughter could survive.

In Sarah’s part of town, the majority of women engage in sex work to make a living, some starting as early as age 12 or 13. They do not become sex workers because they want to; there are simply no other options to provide for themselves and their children.

Sarah’s story – a story that could be told of many women in her situation – brought to life the sheer gap between us. Her circumstances meant all the cards were stacked against her from the beginning, trapping her in a cycle that gave her little hope or opportunity for more.

Inequality is often framed in terms of rich or poor, of “have” and “have not.” But there is much more to the equation. Critical to understanding today’s age of inequality – and in helping to close the gap – is recognizing that inequality is layered. If you are poor, then you are also unlikely to have access to sexual and reproductive health care and, in turn, unlikely to have access to education or good jobs.

This is exactly what the UN Population Fund (UNFPA) seeks to uncover in its latest annual report, Worlds Apart: Reproductive Health and Rights in an Age of Inequality.

In Worlds Apart, the bottom line is that economic inequalities reflect and are reinforced by inequalities in realizing sexual and reproductive health and rights. It is a vicious cycle with compounding problems: A woman or girl whose health and rights are not fulfilled is more likely to face inequalities in education, economic stability, and health outcomes; and, a woman or girl in poverty is likely to have less access to reproductive health information and services that can help her break the pattern. Some, if not all, of the disparities she faces will be passed to her children, and her children’s children.

These effects ripple out to impact not just her rights, her health, her job prospects, and her economic potential, but that of her family, her community, and her country. She is trapped in a cycle of poverty and marginalization.

This is not a woman’s issue; it’s the world’s issue. According to the report, 68 countries had larger gender gaps in 2016 than in 2015 – a significant step backward as we inch closer to the 2030 deadline of the Sustainable Development Goals. The ripple effects of a healthy, empowered woman or girl tie into each and every one of the goals, which are based on a foundation of equality and inclusiveness. These goals will remain out of our reach unless we can reach those who are left the furthest behind – those for whom basic human rights are still not fulfilled.

In developing countries, women in the poorest 20% of households may have little or no access to or information about contraception, prenatal care, safe delivery, and antenatal care. This means they are subject to unequal reproductive risks like unintended pregnancies, unsafe abortions, or complications before, during, and after pregnancy.

For example, newborn survival is a key indicator of how much access a woman has to reproductive health care. Increased rates of neonatal mortality – or newborn death during the first 28 days of life – is a sign that a population lacks access to family planning and quality maternal care during pregnancy and at birth. The report found that while globally, newborn deaths are declining, the gap between rich and poor is increasing: An infant’s survival rate beyond its first month of life is much higher if he or she is born into a wealthy family. Addressing these disparities in girls’ and women’s health and rights is the first step in narrowing these disparities, putting us all on a path to a more equal world.

It’s feasible. Take, for example, education: Worlds Apart data show that if girls in developing worlds all received secondary education, we would see a 64% decline in child marriage, a 59% decline in early births, and a 42% decline in the fertility rate. Imagine what this generation of girls can achieve if they are able to simply control when – or if – they have children.

When I think about Sarah from my vantage point in Washington, D.C., I’m humbled by her strength and perseverance in a world that puts up barriers that I’ve never had to face. It will take collective action – and political will – to address the inequalities in sexual and reproductive health and rights that underlie all other forms of inequality. The truth of the matter is, we cannot move forward while so many are left behind.

Learn more about the Universal Access Project and get involved at www.universalaccessproject.org.

*Name has been changed to protect identity.