Regional Arrangements and the UN

Regional Arrangements and the UN 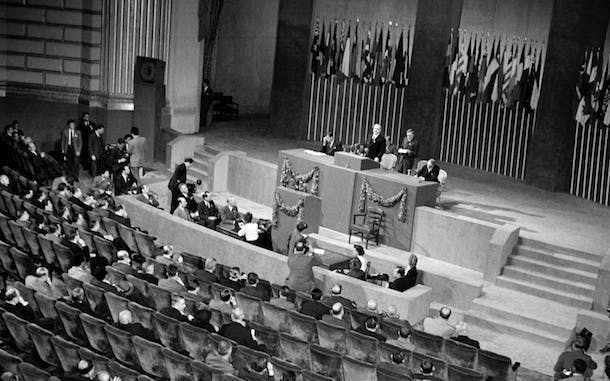 This week saw the signing of the Trans-Pacific Partnership (TPP). This trade agreement between 12 countries incorporates approximately 40 percent of the world’s economic output. When the treaty is ratified, its provisions will cover 800 million people. But the TPP is still a regional agreement, rather than a global trade deal.

How has the United Nations generally looked upon regional arrangements? After all, the organization was established to create international governance. We might intuitively think that the UN wanted to eliminate regional agreements or wholly subsume them into international agencies.

There were pragmatic reasons for these articles too. The U.S. remained committed to the Monroe Doctrine, while the Soviet Union was rapidly expanding its influence in Eastern Europe. Great Britain’s empire was transforming into a Commonwealth. These states wanted to ensure that the UN would allow room for regional influence and organizations.

Within the UN itself, regional groupings were a key element of many UN agencies from the start. The World Health Organization, for instance, is divided into six regions. This made administration easier, fostered closer communication between neighboring countries about disease, and promoted cooperation. Regional groupings were also a way to separate countries with disputes. The WHO was created in 1948, just a year after the violent partition of colonial India and the First Kashmir War. India and Pakistan ended up in separate regions of the WHO. India is part of the South-East Asia group in the WHO, while Pakistan belongs to the Eastern Mediterranean. The World Bank also classifies by region, but also by economy.

In the decades since the UN Charter, regional arrangements have flourished around the world from the EU to ASEAN. The UN may be an international organization. But it has always recognized the importance of regional affiliations and arrangements.