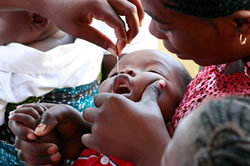 Just last month the world celebrated as India marked a major success in its battle against polio by being removed from the World Health Organization’s list of countries plagued by the crippling disease. India’s progress has proven to the world what is possible when we focus on the task at hand. Using the success from India as fuel and will-power, the polio spotlight has shifted to other countries still affected.

Kicking off today, Health Ministries, UN agencies and communities in 20 African countries are uniting with tens of thousands of volunteer immunizers over four days to go door-to-door to vaccinate more than 111 million children under the age of five against polio.

The clock is ticking. For the next 10 days, this United Nations-backed campaign is intended to serve as a massive boost in efforts to eradicate the disease across West and Central Africa.

Nigeria, the only country in Africa where polio transmission has never been interrupted and one of only three countries worldwide where polio is still endemic, aims to get two drops of the oral vaccine into the mouths of 57.7 million children. Due to operational reasons, Nigeria will be conducting their campaign a week later,  from March 31 to April 3. Nineteen other countries, which have eliminated polio but are at risk of re-infection, are stepping up efforts to reach nearly 53.3 million children.

Even though polio vaccination programs have driven down the number of new cases worldwide dramatically in recent years, countries cannot rest easy until polio is completely stamped out.  Due to the presence of the disease in Nigeria, the risk of importation of the polio virus remains high in West Africa, with Cote d’Ivoire, Guinea, Mali and Niger having seen the resurgence of the virus last year.  If your house was on fire, you wouldn’t rest until it was 100% out – and it’s the same with polio eradication.

To reduce the risk of transmission of the polio virus, polio vaccine coverage must be sustained for a number of years. However, a World Health Organization assessment conducted in February shows that there have been gaps in routine vaccination in most West African countries. The upcoming campaign aims to address these gaps and boost the population’s immunity levels.

“The upcoming campaign in West and Central Africa will aim to cover all children, immunized or not, in order to boost their protection levels and deprive the virus of the fertile seedbed on which it depends for survival,” says World Health Organization Regional Director for Africa, Dr. Luis Sambo. “This exercise should bring us closer to reaching our goal of interrupting wild polio virus transmission in our region in 2012.”

“Either we succeed in eradicating polio today or this initiative will falter tomorrow and polio will explode. We will then see millions of children being paralyzed by this disease,” said David Gressly, UNICEF Regional Director for West and Central Africa.

“Since the beginning of the fight against polio, we have prevented over 5 million children from becoming paralyzed across the world. Now countries from West and Central Africa are mobilizing more vaccinators and volunteers than ever before. Making Africa polio free is within our reach. We cannot miss this historical opportunity. Is this last push going to be easy? No. Can we achieve it? Yes. Together we need to knock on all the doors to reach every last child wherever he or she is. We never again want to see children crippled by this disease,” added David Gressly.

Since the 1988 launch of the Global Polio Eradication Initiative (GPEI) – spearheaded by national governments, the World Health Organization, UNICEF, Rotary International, the US Centers for Disease Control and Prevention, and supported by the Bill & Melinda Gates Foundation – the incidence of polio has been reduced by more than 99 per cent. At the time, more than 350,000 children were paralyzed or killed every year in more than 125 countries. Last year, only 650 cases were reported worldwide – remarkable progress, but the world will not be free from the nightmare of polio until we drive that number down to zero. Thanks to the extraordinary efforts underway in Africa this week, we are getting closer and closer to that goal.