UNFPA, the United Nations reproductive health agency, is dedicated to safeguarding the health, rights, and dignity of girls and women during the Ukraine crisis, including their right to give birth safely and live free from violence. Seema Jalan, Executive Director of the Universal Access Project, which recently hosted a media briefing with UNFPA representatives about the situation in Ukraine, helps unpack the agency’s efforts to support girls and women at risk and explains what this crisis means for UNFPA’s decadeslong efforts to strengthen Ukrainian health systems.

News reports of the Russian invasion of Ukraine have been harrowing: Civilians have been targeted, cities have been shelled, and life as so many knew it has been completely upended. As humanitarian needs in Ukraine have surged, so has the work of the United Nations, which is committed to stay and deliver for the people of Ukraine and is actively scaling up humanitarian assistance to Ukraine and neighboring countries.

“What we are seeing right now is the largest refugee crisis since World War II in Europe: an estimated 2.3 million refugees, mostly women, girls and children,” Giulia Vallese, Regional Director for Eastern Europe and Central Asia at the United Nations Population Fund (UNFPA), the United Nations reproductive health agency, said during a press briefing hosted by the Universal Access Project on March 10, 2022. UNHCR, the UN Refugee Agency, has since updated its estimates to 2.8 million. “In the situation of war, the needs of women and girls are often neglected. People think about food, shelter — this is extremely important. But often forgotten is the fact that women still get pregnant, they still deliver, they still get their periods.”

UNFPA has not forgotten. The agency remains the leading responder for girls and women in humanitarian crises, and Ukraine is no exception. Dr. Natalia Kanem, the UNFPA Executive Director, emphasized that the agency’s priority remains safeguarding the health, rights, and dignity of girls and women affected by the Ukraine crisis — including their right to give birth safely and live free from violence — regardless of race, religion, or ethnicity.

“Women deserve a life of dignity and respect, wherever they are — on the move across the border or in Ukraine,” said Jaime Nadal, UNFPA’s Representative in Ukraine.

UNFPA estimates that 80,000 women will give birth in Ukraine in the next three months. Maternity wards have been bombed and destroyed most recently in Mariupol, but also in Zhytomyr and Saltivsky – prompting UNFPA, UNICEF, and the World Health Organization to jointly call for an “immediate cessation of all attacks on health care in Ukraine.” 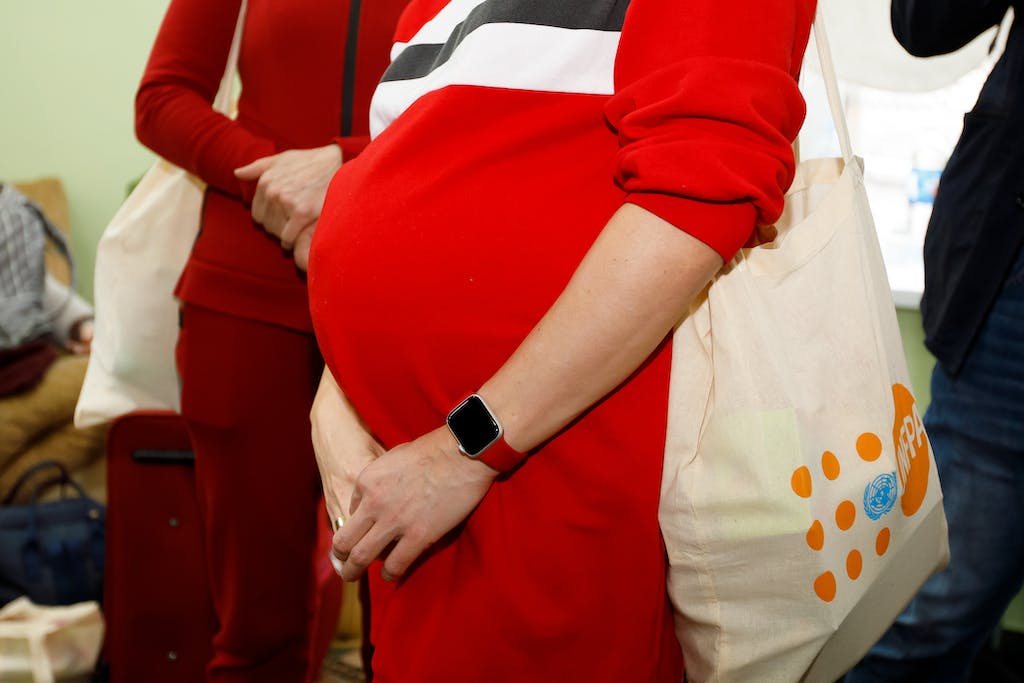 In a testament to the commitment of Ukrainian health care workers, women have been moved to basements of hospitals, makeshift shelters, subway stations, and elsewhere to deliver safely. But the health system is running out of supplies, warned Jaime, who emphasized that established humanitarian corridors must be respected not only for civilians to leave but also to allow UNFPA and other response agencies to deliver lifesaving medicines and supplies into the country. UNFPA is also working with local authorities to ensure that women can access shelters, crisis rooms, hotlines, and comprehensive support for gender-based violence, which is on the rise.

RESPONDING IN UKRAINE AND BEYOND

Outside of Ukraine, UNFPA is working in Moldova and other countries to provide services to refugees and put safety nets in place for women when they arrive. It is prepositioning emergency response supplies that include kits for family planning, clean delivery, post-treatment of rape, as well as kits for secondary-level health facilities to manage more complicated deliveries and blood transfusions. It is also distributing dignity kits in Ukraine and Moldova in sync with the provision of mental health psychosocial support services.

UNFPA’s work in Ukraine did not begin with the invasion. The agency has worked with authorities and partners there for decades to expand access to reproductive health care and protection from violence for some of the country’s hardest-to-reach people. UNFPA has long worked to build the capacity of local health care systems, including 65 facilities to provide shelter or crisis solutions to women and girls. Only 29 of those facilities are still operational. Some are not in service, some have been repurposed to offer shelter for women on the move, and some have been shelled — cut off from contact, potentially destroyed, with current status unknown. One-third of the cities in which UNFPA operates are now occupied by Russian forces.

“This is all at stake now with the war … all that investment is being compromised. It’s heartbreaking. Women will not have services available to them,” said Jaime.

But UNFPA is staying and delivering for girls and women, even as the situation remains volatile and uncertain.

“Two weeks ago, there were no refugees from Ukraine into Western Europe. Now we have 2 million. …This is massive in scale and completely unprecedented,” said Jaime. “We don’t know what the situation will look like in two weeks or one month.”

This piece was first published on Medium. Read the original article here.