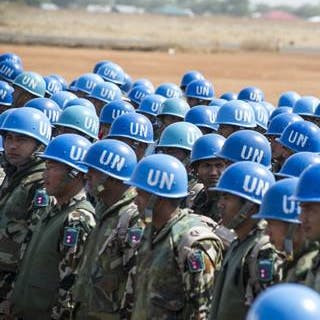 Nearly 20,000 supporters from across the United States asked President Obama to request more funding for UN Peacekeeping in his FY’15 budget – and he listened!

In his presidential budget request to Congress released last week, President Obama included over $2.5 billion for U.S. dues towards peacekeeping — a figure that would make real progress on getting the U.S. out of the red at the UN and back in good standing with our allies and international partners.

This was especially critical given that we had quite a lot of ground to make up after Congress slashed funding for peacekeeping by 12 percent this year – and provided ZERO funding for the UN mission in Mali.

In his budget request to Congress, President Obama not only asked for funding for the mission in Mali, which the U.S. pushed for in the UN Security Council, but also accounted for a potential new peacekeeping mission in the Central African Republic — where the threat of a full-blown genocide grows more real every day.

And with a crisis also brewing in South Sudan, the value of peacekeepers couldn’t be clearer.

The price tag may sound like a lot, but consider this: Sending UN peacekeepers to fulfill these dangerous missions — the missions we’ve asked for — is one-eighth the cost of the U.S. going it alone.

That’s why I’m so pleased that President Obama has shown he’s committed to the U.S. holding up its end of the bargain.

We have more work to do to get us fully paid up at the UN, but this budget is a good start.

The Better World Campaign is mobilizing supporters to thank President Obama for requesting more UN Peacekeeping funding – you can join them here.