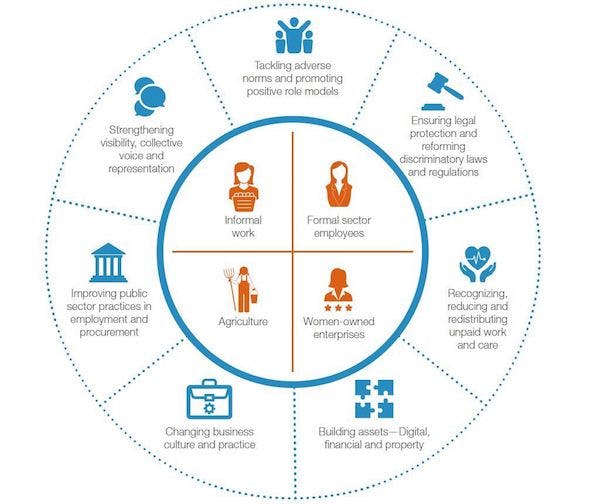 The highly-anticipated second report of the United Nations Secretary-General’s High-Level Panel on Women’s Economic Empowerment, released this week at the UN, leaves no room for ambiguity: Empowering women as economic players is good to do, right to do, and smart to do. More than that, we know how to do it, and Leave No One Behind: Taking Action for Transformational Change on Women’s Economic Empowermentgives us a clear and compelling game plan.

The report is enlivened by the conviction that “economies can be made more fair, just, and sustainable if they are constructed around policies and practices that place women’s rights at their core” and grounded in the determination to leave nobody behind, particularly the most marginalized women.

The 20 eminent business, civil society, and government leaders who make up the panel urge us to accelerate seven drivers to economically empower women and reap the wider gains we know will result for us all.

Tackle adverse norms and promote positive role models. Gendered norms, or unwritten rules and expectations about women and their roles and value, exert powerful limits on women’s economic empowerment. The report especially highlights the need to overturn the devaluation of care work and the stigma of the informal economy, both of which disproportionately impact women. Efforts to eliminate all forms of violence against girls and women, which can dramatically undermine their economic participation and exact real economic costs, are also critical. Consider that currently 46 economies do not legislate against domestic violence, 41 do not legislate against sexual harassment, and 59 do not legislate against sexual harassment in employment. Further, the World Bank estimates that costs associated with violence against women amount to an estimated three percent of global GDP due to lost productivity. Meanwhile, approximately 35 percent of women worldwide are victims of physical and/or sexual violence in their lifetimes.

Recognize, reduce, and redistribute unpaid work and care. Women’s unpaid work contributes an estimated $10 trillion a year globally. Women’s unpaid work subsidizes economies, yet does so while substantially limiting the ability of women to participate in political, social, and economic activities. It’s important, therefore, to ensure first that care work is decent work – work that offers, as the report makes clear, adequate wages, equal pay for work of equal value, decent working conditions, formalization, social security coverage, occupational safety and health regulations, self-care, professional training and professionalization, and freedom of association. Further, the report emphasizes shifting social norms to facilitate the redistribution of care work from women to men and ensure that care is the “equal right and responsibility” of men.

Build productive assets – digital, financial, and property. Women’s economic participation is often severely limited by a lack of control over productive and related assets. Consider that more than 1.7 billion women do not own mobile phones. In South Asia, women are 38 percent less likely to own a phone than men. Almost half of girls and women worldwide are estranged from the formal financial system. The report recommends action to promote women’s equal access to digital financial services and equal access to and control over productive resources, including land, labor, and capital. Governments also need a better assessment of how digital and financial resources are distributed to identify and ameliorate gaps. 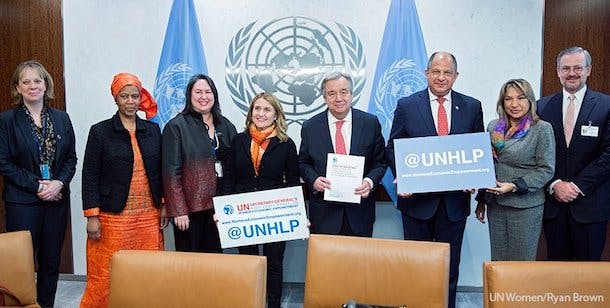 Change business culture and practice. The private sector is an essential driver of women’s economic empowerment at scale and also benefits in multiple ways from empowering women – from attracting and retaining talent to increasing returns to generating consumer spending. The report also urges businesses to assess their own operations, including pay equality, workforce balance, leadership, procurement, supply chains, and corporate social responsibility investments.

Improve public sector practices in employment and procurement. Governments require large workforces and purchase trillions of dollars in goods and services. As an economic actor, the public sector can therefore be a powerful spur for women’s economic empowerment. Yet women-owned enterprises receive only an estimated one percent of total annual spending by governments because women-owned enterprises lack access to financial, social, and human capital and because of resistance fueled by adverse norms and expectations. While women make up an estimated 52 percent of public workers, they are also generally paid less than their male peers. The report calls for public sector leadership to establish gender targets for hiring and top-level positions and to establish government-wide targets for procurement to promote women-owned enterprises.

Strengthen visibility, collective voice, and representation. The report makes clear that women’s economic empowerment requires full and equal participation of women in economic, social, political, and cultural life at all levels, including in decision-making and leadership. While women concentrate  in sectors characterized by poor working conditions, precarious employment, and informality, the report argues that women are “far from powerless” to organize and use their voices to counter systemic challenges – as, indeed, are men, who need to champion the same aims. The report calls particularly for ratification and implementation of the 1948 ILO convention on Freedom of Association and Protection of the Right to Organize and for legal reforms to protect informal workers and promote the formalization of their work.

Women’s full economic participation is central to accelerating global economic growth, necessary for sustainable development, and essential for equality between women and men. But progress toward a more inclusive and sustainable economy, one in which women fully participate and thrive, will depend on an “all hands” effort by governments, civil society, the private sector, and multilateral organizations working together. The World Economic Forum has estimated that with present trends, we will achieve gender equality in 170 years. That’s about 170 years too late. The  High-Level Panel has given us a powerful playbook, reminding us at the same time that while the barriers to full and fair participation are high, so are the rewards for dismantling them.