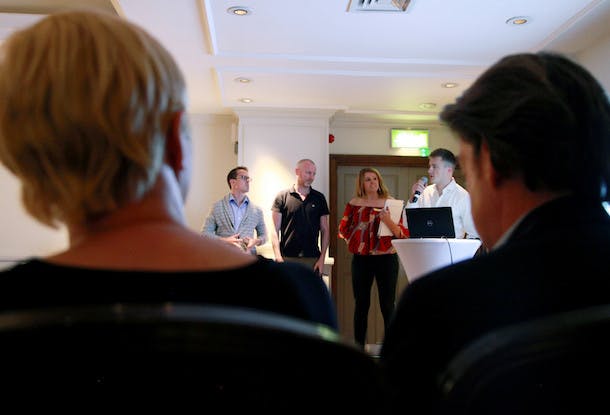 At a recent policy hackathon in London presented by Dell and the United Nations Foundation, a group of 30 policymakers, entrepreneurs, academic leaders, and civil society members proved that innovation is a critical component of sustainable development.

The event challenged participants to answer the question: How can public policy promote entrepreneurship and advance the Sustainable Development Goals?

Each of the five teams was given 60 minutes to develop a novel solution to one of the following needs:

Participants pitched their ideas to a panel of judges that included Rick Parnell, the Chief Operating Officer of the UN Foundation; Davis Smith, the Founder and CEO of Cotopaxi; Claire Vyvyan, the Senior Vice President of Dell’s Commercial Business Division in the UK and Ireland; and Siim Sikkut, the Government CIO of the Republic of Estonia.

In the winning proposal, Carol Cooke, Emerson Csorba, Mark Futers, Cameron Brown, and Hume Brophy presented a curated archive of stories that highlights the success of women in STEAM fields. Regrettably, only one in five individuals working in STEAM today are women. The team identified the scarcity of female role models as a key obstacle in leveling the gender ratio in the field. As Cooke aptly put it, “You cannot be what you cannot see.” The “Humans of New York meets LinkedIn” website would feature profiles of women that girls can identify with, introducing career paths that might not be known otherwise.

The platform would engage public and private partners to elevate its visibility and involve girls in its development. Dell and the UN Foundation have committed to championing the team’s solution with United Nations and government officials and supporting its efforts to scale the program.

Other themes discussed at the event include using data to inform government-run employment programs and improve their efficiency, centralizing communication channels between governments and constituents, incentivizing youth engagement in entrepreneurship through online platforms, and connecting women to online skill-building workshops.

Dell’s Policy Hackathon illustrated that together, we have an incredibly powerful set of capabilities. After only an hour of discussion, teams came up with five concrete examples of how technology can be leveraged to stimulate economic growth. And the hackathon engaged innovative thinkers around the globe and empowered them to move the conversation forward.

The UN Foundation and Entrepreneurship

The UN Foundation, founded by entrepreneur and philanthropist Ted Turner, has long been driven by a belief that everyone can play a part in building a better world by advancing UN causes. In this spirit, the Foundation created the Global Entrepreneurs Council (GEC), a coalition of the world’s leading entrepreneurs, to promote social innovation as a tool for sustainable economic growth.