Americans in the UN: On the Front Lines Working for Peace

Americans in the UN: On the Front Lines Working for Peace

As part of our “Americans in the UN” project to share the stories of Americans who work for the United Nations, we talked to Sean Kane, who works in the Department of Political Affairs on the Syria crisis. Kane, who is from Worcester, Massachusetts, has previously worked for the UN in Iraq, Afghanistan, and New York.

Sean Kane: For me – and this is particularly my experiences in the field – it’s the combination of the intellectual challenge and the purpose that you’re working for. When you’re trying to mediate between different groups in a country like Iraq or Afghanistan, and you don’t have the leverage of economic resources or military power, the value you add is ultimately the quality of the ideas you propose and helping people to be able to look at their disputes in a different way.

So it’s the combination of this intellectual challenge and being able to put it in service of the public good like trying to help stabilize or mitigate conflict in countries where conflict has been going on so long, where the people there have suffered so much, and the consequences of conflict have been so great for the region and the world.

SK: My dad has a history of working on development in lower income countries, and he had worked for the UN Development Programme. So for a few years when I was growing up, for a part of his career, he worked for the UN, and that’s how I first learned about it. 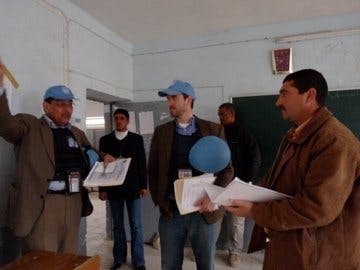 How did you start working at the UN?

SK: After graduate school I was exploring different career options, including the UN – which can be a difficult place to get a foot in the door. I was interested in Iraq and willing to go there at a time (2006) when the sectarian violence was at its highest levels. I think that perhaps because I was willing to take a hardship posting of this nature, it made it easier for me to find an opening to start working in the organization.

What would you say to Americans about how the UN strengthens security for the U.S.?

SK: In Iraq, I was working on territorial disputes between Iraqi Kurds and Arab Iraqis in northern Iraq. As part of that work we needed to go out to all these disputed areas, which include Mosul and Tal Afar and some of the most dangerous parts of the country. We had security escorts from the U.S. military, and I would talk to the soldiers there, and they made it clear that they wanted to support everything we were doing because they saw the link between our work, stability in the area, and their ability to go back home in a responsible fashion.

Why does the UN matter today?

SK: Take Syria and the 2013 chemical weapons attack in Damascus, as a concrete example. Chemical weapons and weapons of mass destruction are obviously something of grave importance to Americans and our national security. When Russia and the U.S. reached their agreement on the need to disarm Syria’s chemical weapons program, the body they looked to and thought could carry out that dismantling was the UN along with the Organisation for the Prohibition of Chemical Weapons (OPCW). This really was the only combination of international bodies that had the neutral standing and the technical expertise in terms of dismantling a chemical weapons program to do that.

What is an example of how the UN has impacted someone’s life?

SK: I worked in Afghanistan on the 2014 presidential election, where the runner-up challenged the vote’s result. This is in a context where Afghanistan is a country that sadly had gone through decades of civil war. I remember being in a room with all my Afghan colleagues, watching the press conference where the runner up said he would not accept the results, and the look on their faces – the kind of fear they had, of, ‘We could be heading down the road to civil war again’ was visceral. To be able to work directly with then Secretary of State Kerry and his team to broker a political agreement that averted this political dispute leading to fresh civil strife is something that I believe affected a lot of people’s lives.

JOIN US: “Are you an American interested in supporting the UN? Sign up for updates from our sister organization, the Better World Campaign, for opportunities to take action.”