On April 22 – Earth Day – representatives from more than 100 countries will gather at the United Nations in New York to sign the Paris Agreement on climate change. It is expected to be the largest single-day signing in the history of international accords.

Let’s take on four of the questions you may be asking right now:

Didn’t the world do this already in Paris last December? 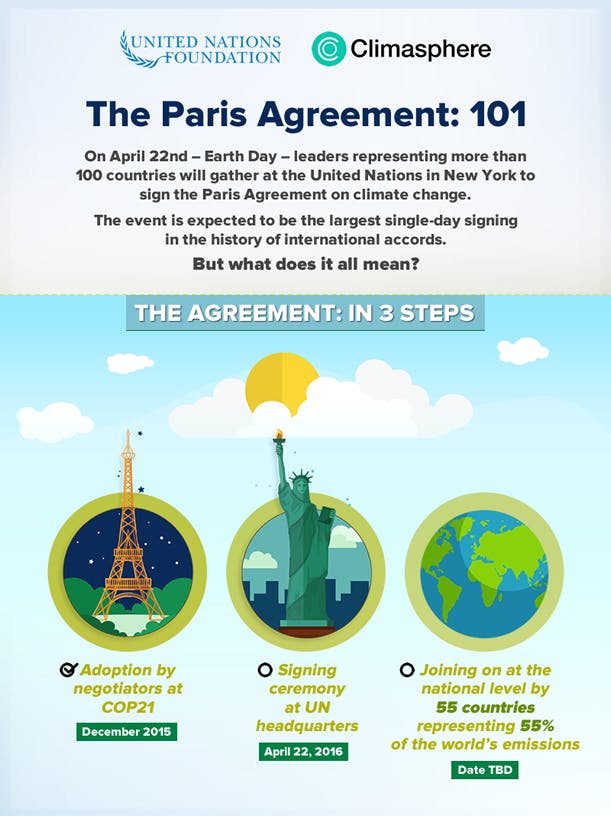 It takes three steps for the Paris Agreement to take effect: The first was adoption by the negotiators at the “Conference of the Parties” (COP) in December. 195 countries agreed to keep global temperature rise well below 2° Celsius, by limiting harmful emissions to stave off the worst impacts of climate change on health, food security, and extreme weather.

This was a great success for the international convening bodies of the UN (the UN Framework Convention on Climate Change), but there’s more work to do. At the signing ceremony on April 22, countries will officially accept the agreement.

The third step, which may take months to get done, is joining at the national level – through legislative or executive action. For the agreement to “enter into force,” it must be accepted by at least 55 countries that together produce 55% of the world’s emissions.

China and the United States alone, who recently announced that they would join the agreement, produce nearly 40% of the world’s emissions between them.

Then comes implementation, when countries “put their money where their mouths are” and act upon the specific national commitments they’ve made.

So remind me – what’s the big deal? 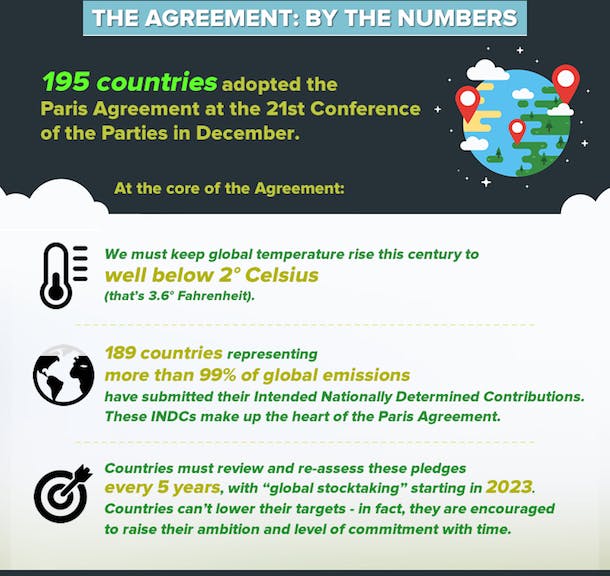 The Paris Agreement is a historic document, the first to unite virtually every nation around their responsibilities to take action on climate. The agreement centers on the idea that we must keep global temperature rise this century to well below 2°C (3.6 degrees Fahrenheit), while also strengthening nations’ ability to prepare for and manage the impacts of climate change.

189 countries, representing more than 99% of global emissions, have made commitments to action – called Intended Nationally Determined Contributions or INDCs – and these INDCs make up the heart of the Paris Agreement. The agreement requires all countries to review and re-assess these pledges every five years, with “global stocktaking” starting in 2023. Countries can’t lower their targets – in fact, they are encouraged to raise their ambition and level of commitment with time.

Why should I care? 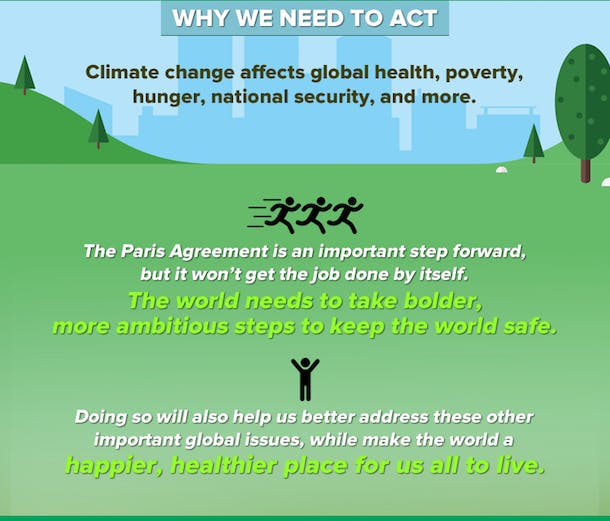 Because climate change affects everything! If we don’t act, the world is vulnerable to devastating climate impacts, including flooding of our coastal cities, water shortages, and increased extreme weather. Plant and animal species will be pushed to extinction, drought and famine will increase, and some small island nations could be literally drowned by rising sea levels.

Climate change affects global health, poverty, hunger, national security, and more. The Paris Agreement is an important step forward, but it won’t get the job done by itself. The world needs to take bolder, more ambitious steps to keep the world safe. Doing so will also help us better address these other important global issues.

The Paris Agreement has drawn up the timeline – global emissions should peak as soon as possible, with rapid reductions starting soon, so that we can reach carbon neutrality by the second half of the century.

What can I do? 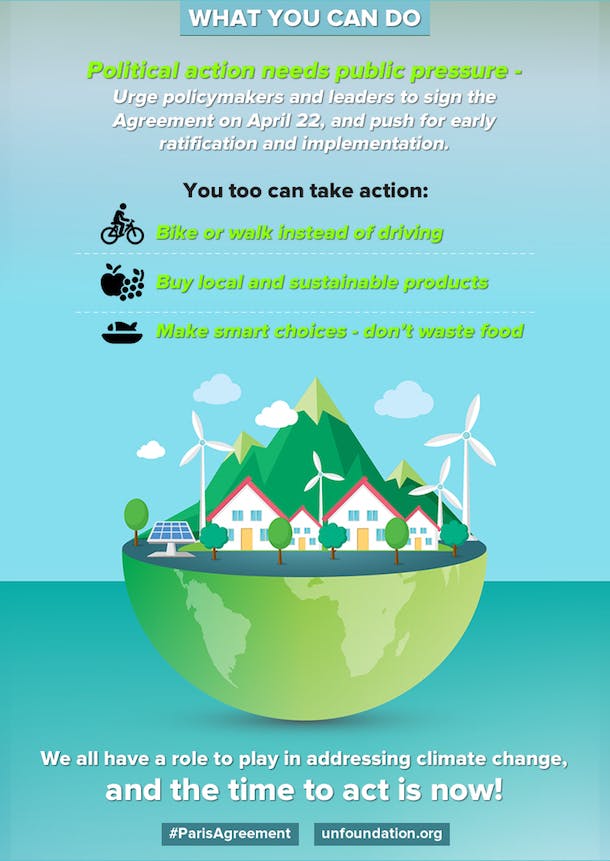 Political action needs public pressure – you can urge policymakers and leaders to sign the Paris Agreement on April 22, and push for early acceptance and implementation. But you can also take action in your daily life to reduce your carbon footprint: Biking or walking instead of driving, buying local and sustainable products, and not wasting food are a few ways to take climate action into your own hands. We all have a role to play in addressing climate change, and the time to act is now!

Spread the knowledge on the Paris Agreement and share one of the graphics above across your channels!

Tweet this: The #ParisAgreement could be the most important global accord of our generation. Here’s why: http://bit.ly/1UZbN0h