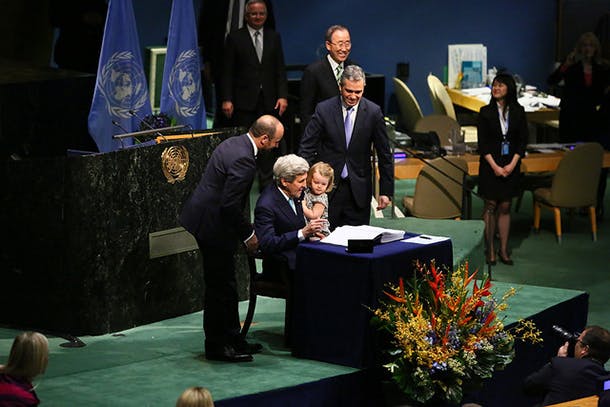 On September 21, United Nations Secretary-General Ban Ki-moon is convening a special event at UN headquarters in New York to encourage countries to officially join the Paris Agreement on climate change, the first-ever universal international accord for climate change.

You may recall that the Paris Agreement was first adopted by 195 nations in December of last year. The agreement was then signed at the UN on Earth Day this year by 175 countries at a ceremony that saw the most signatures ever to an international agreement on a single day in history.

Now, for the agreement to enter into force, it must meet two criteria: at least 55 countries representing at least 55% of the world’s global greenhouse gas emissions must formally join it.

Currently, 26 countries have joined the agreement, representing 39% of the world’s total emissions. A big breakthrough recently occurred when the two largest greenhouse gas emitters (and the two largest economies) – the U.S. and China – joined the agreement. This was a major turning point, as those two countries alone contribute 38% of the world’s emissions.

That morning, the Secretary-General will invite nations to deposit their instruments of ratification. That’s an official signed document by which a country formally joins the Paris Agreement and agrees to be bound by its rules. Some countries will use the event to announce their plans to join it by the end of the year.

By catalyzing these commitments, the September 21 event will help bring the Paris Agreement even closer, perhaps before the end of the year. Early entry into force will help jump-start the most important step – implementation, when countries “put their money where their mouths are” on climate action by acting on the commitments they made last year through their Intended Nationally Determined Contributions, known as INDCs.

Early entry into force will also give businesses, investors, and individuals confidence that the world is taking seriously the urgency of addressing climate change and is ready to act boldly through the Paris Agreement to tackle the global challenge before us. There’s no time to waste.

So what can you do?

2. Join us on September 21 for the special convening at the United Nations. The hour-long event will be livestreamed on UN TV at 8 am ET, so tune in and watch as leaders from around the world announce their commitments to join this historic climate accord.

3. Participate online! Share your support for countries that have joined, urge others to follow their example, and tell the world about the importance of this event by using the hashtags #UNGA and #ParisAgreement.

And here’s a bonus for you – a short infographic that sums up the Paris Agreement and where we currently stand. Share it with friends and partners to spread the word for climate action. We’re so close to bringing this agreement into force, let’s keep going strong! 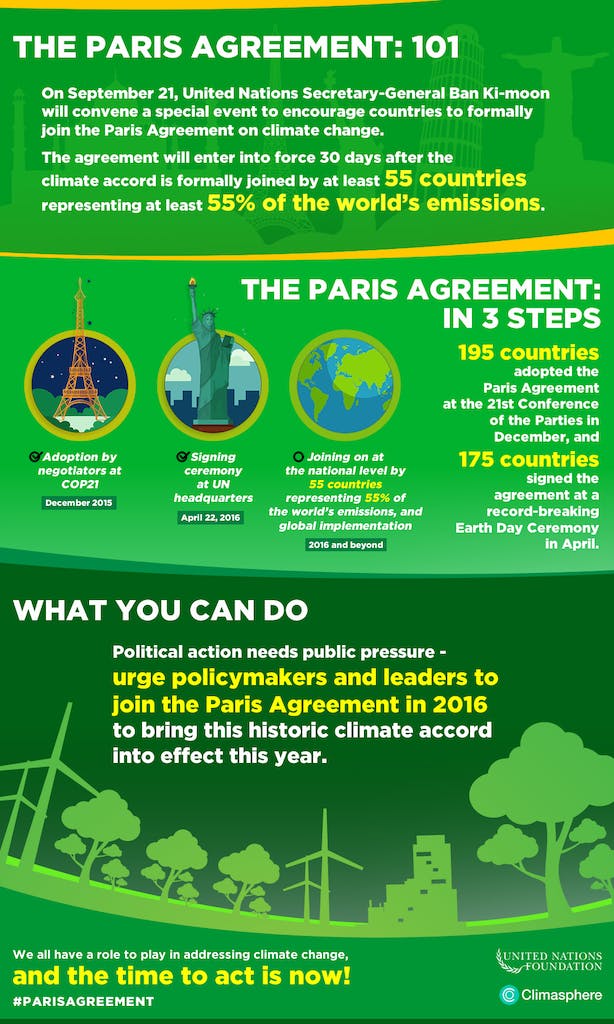 Where do we stand on the #ParisAgreement on climate change? Consider this your guide: ow.ly/Q7Pf3048meS pic.twitter.com/S5S5EFNsjR