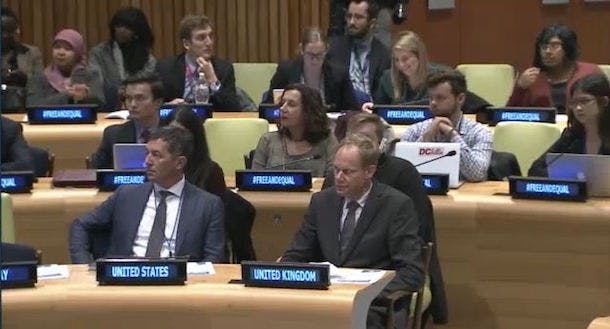 Today, April 13, marks the one year anniversary of the official launch of a groundbreaking new U.S. State Department role, Special Envoy for Protection of the Human Rights of LGBTI persons.

The announcement paralleled significant progress, but also challenges, regarding the advancement of the human rights of LGBTI people around the world.  At the United Nations, this includes:

On the other hand, more than 70 countries around the world continue to criminalize consensual same-relations. Even in the U.S., Ford Foundation President Darren Walker recently observed that one would have to live “under a rock” to believe the struggle for equality is over.

Announcing the appointment of U.S. Career Foreign service officer Randy Berry to the new special envoy role in 2015, U.S. Secretary of State John Kerry declared, “Defending and promoting the human rights of LGBT persons is at the core of our commitment to advancing human rights globally – the heart and conscience of our diplomacy.”

As envoy, Berry has racked up the miles (or kilometers) in visiting 42 countries across five continents. This travel has encompassed meetings with a wide diversity of actors and perspectives including civil society advocates, youth, businesses, faith groups, and high-level public officials stretching from Jamaica to Brazil to Malawi to the Vatican.

Together, the role of partnership and locally-driven activism has informed this effort. “Change is not going to occur because the U.S. wants it …Change comes through those people working indigenously within those societies to produce a more equitable framework,” Berry has said.

Berry has also recognized the work of the UN in advancing global LGBTI equality as well as raising awareness on the violence and discrimination based on sexual orientation and gender identity. This includes joining a celebration marking the International Day against Homophobia and Transphobia (IDAHOT) convened by the UN Foundation and Human Rights Campaign as well as appearing at a UN “Human Rights Day” discussion on the economic cost of LGBTI exclusion.

For Berry, the case for LGBTI equality is simple. As he says, “Societies, companies, and cultures thrive when they realize the value of diversity.”