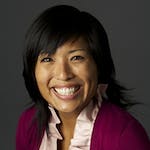 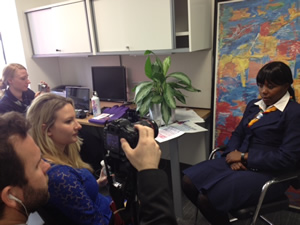 Yesterday I went up to New York to film Kumbukani – or Kumba, as her friends call her – a Girl Guide from Malawi who came to attend the Commission on the Status of Women.

When I saw her she appeared…well, ordinary.

While telling her own story she was soft-spoken, but once the conversation shifted to empowering girls her voice rose with a crescendo.  She quickly launched into the importance of providing girls with access to education, health services and safe spaces – she was animated and came alive.

The facts on Malawi are stark: more than half of its population falls below the poverty line and life expectancy overall is 49 years old.

It’s even worse if you’re a girl: less than a quarter of girls graduate from primary school – often dropping out because of high school fees, early marriage and early childbearing. Only half of girls between the ages of 15-24 know how to read and write.  And if you’re 18 years old, there’s a 50 percent chance you’re already married.

In some ways, Kumba is the embodiment of Malawi’s challenges.  She dropped out of primary school at a young age after getting pregnant.

But Kumba always believed in the power of education, both for herself and for other girls, and was determined to go back.  So she did, finishing both primary and secondary school.  Her goal now is to attend university “No. Matter. What.”

Kumba is a trainer for peer educators in a joint UN program that Girl Up supports. The peer educators are older girl mentors who work at girls clubs that provide safe places to socialize and learn.

In this program and with Kumba’s help, more than 180 peer educators have been trained reaching more than 16 primary schools and 40 villages. Over the next three years, the program will impact more than 550,000 adolescent girls between the ages of 10-19.

After the filming we had lunch and there was silence in the room. I found myself searching for things to say. After hearing her story, what could we have in common?  When Kumba mentioned that she teaches self-defense to girls I immediately blurted out, “I do too!”  From there we shared our experiences and laughed at our all-too-similar anecdotes.  Suddenly, we were no longer separated by 10,000 miles and a cultural divide.

Kumba is just a girl, like any other – she has wishes and wants, and still continues to dream.  And that makes her extraordinary.