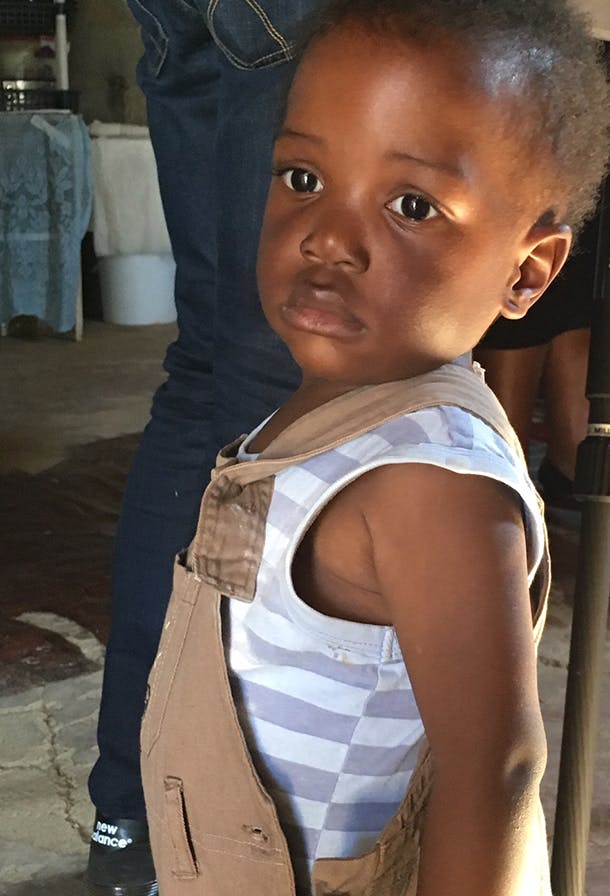 In many countries, particularly where HIV is common, tuberculosis (TB) has become widespread as it is extremely infectious and remains in the air for hours. TB spreads particularly fast in areas with poor living conditions and through people with weakened immune systems from HIV/AIDS. South Africa, which is home to the largest number of people living with HIV, also has one of the greatest burdens of TB in the world.

In July, I met Nozolo and her twin toddlers, a boy and a girl, in South Africa. During their first two years, TB has markedly shaped all of their lives. They have all been affected by TB and are receiving services from the South African Red Cross through a project made possible by the Lilly Foundation on behalf of the Lilly MDR-TB Partnership.

Nozolo’s son Ayanda was diagnosed with multi-drug resistant TB – meaning TB that cannot be cured with the most common medicines we have to fight it – when he was only 5 months old. The next month he started a two-year treatment regimen, the first eight months of which he was hospitalized and not able to live with his family.

Treatment for multi-drug resistant TB comes with serious side effects, which are difficult even for adults. After he was discharged to continue his treatment as an outpatient, his mother Nozolo was diagnosed with TB meningitis, a form of TB which effects the brain and spinal cord rather than the lungs. TB, which is spread through the air, is highly contagious and stigmatized and caused the family to be evicted from their home.

The family benefited from the strong partnership in South Africa to fight TB. The South African Minister of Health, Aaron Motsoaledi, is one of the most committed global advocates for TB elimination and is making real efforts to turn the tide on this disease by strengthening the health system. The Ministry of Health works closely with the Global Fund to Fight AIDS, TB and Malaria and organizations like the Red Cross, which provided care and support to Nozolo’s family.

Community volunteers and staff from the Red Cross transported Ayanda and Nozolo to medical appointments, provided them with food, helped them find housing when they were evicted, and supported them in the community when they were stigmatized. When we entered the house with one of these community volunteers, Ayanda and his twin sister clung to her.

While 2 billion people are infected with tuberculosis each year, health workers are fighting every day to protect families affected by it, and partnerships are supporting them in this fight. If we do not prioritize ending TB – the world’s leading infectious disease and one that has been around for generations – families like Nozolo’s will continue to be at risk.

On October 13, the World Health Organization released a new report on tuberculosis and what is being done to stop the spread of TB. The new data in the report tells us that TB remained one of the top 10 causes of death globally last year, causing more deaths than HIV and malaria.

To achieve the Sustainable Development Goal target of reducing TB cases by 80% by 2030, countries need to make strong commitments and must move quickly to prevent, detect, and treat this deadly disease.

To learn more about tuberculosis and to read the report, visit the WHO website.